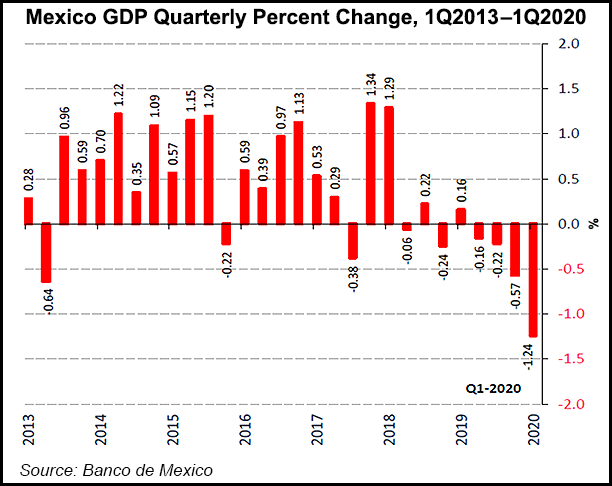 As an infrastructure investor for the world’s largest asset manager, “I tend to think about the long-term…fundamentals of investments and assets, and in this case, a country,” Leautaud said last week during a webcast panel hosted by Rice University’s Baker Institute for Public Policy.

To be sure, he said, President Andrés Manuel López Obrador’s government has sent troubling messages to investors through actions such as canceling a planned international airport, a contractual dispute with natural gas pipeline developers, and a unilateral attempt by energy ministry Sener to modify power sector rules to the detriment of wind and solar developers.

While these episodes were clearly negative for investor sentiment, the worst potential impacts in each case were prevented by “strong forces driving toward equilibrium,” Leautaud said.

For example, a majority of the scrapped airport’s bondholders approved a bond buyback program by the government, the pipeline developers agreed on renegotiated terms with offtaker Comisión Federal de Electricidad (CFE), and the Supreme Court upheld a request by antitrust regulators to block implementation of the controversial power sector rules.

Before Covid-19, Mexico “had a strong balance sheet as a country,” Leautaud said, highlighting “a growing government take in terms of tax collection” and, “very importantly, a competitive labor pool that is on par with almost any country in the world.”

Mexico “has the advantage of not being directly in the line of fire” between the two global superpowers, and is poised to benefit “from the onshoring phenomenon that will undoubtedly happen” as a result of the growing U.S.-China rivalry.

Over the short-term, however, Mexico faces more of an uphill battle amid the current health and economic crises, Leautaud said.

“Like other emerging markets, Mexico will face a deeper contraction in its economy [and] a slower recovery, because it has a weaker health system to start with,” Leautaud said, “as well as a vast prevalence of underlying conditions like obesity and diabetes, and it certainly has relatively limited fiscal space to attack the crisis.

“But on the other hand, I will also say that we have not only the benefit of a delayed onset of the health crisis vis-à-vis the rest of the world, but also a young population, [and] certainly a low ramp-up cost to our economy…”

Mexico’s large informal economy, i.e. businesses that are not taxed or regulated by the state, is a “double-edged sword,” Leautaud said. The informal sector limits the amount of tax revenue available for stimulus spending, and it doesn’t require much capital to restart after a crisis, “so that should play to our advantage in the future.”

In addition to the pandemic, a growing concern for Mexico is the “sudden and excessive destruction of state capabilities” that Mexico has seen as a result of López Obrador’s public austerity program, said Control Risks’ Daniel Linsker, who shared the panel discussion. He is a partner in the consultancy.

These policies have “in effect, created a system where a lot of the people that were charged with managing the state have been replaced with inexperienced, and more often than not, unqualified individuals,” Linsker said, a worry that was recently expressed by three former members of energy regulatory commission CRE.

Linsker added that CFE and state oil company Petróleos Mexicanos (Pemex) also “seem to have completely forgotten years of experience and best practices around government procurement and [the] tender process, awarding a lot of contracts directly through closed or invitation processes.”