BKV Corp. has closed on the $750 million purchase from ExxonMobil subsidiaries XTO Energy Inc. and Barnett Gathering LLC of a package of upstream and midstream natural gas assets in the Barnett Shale. 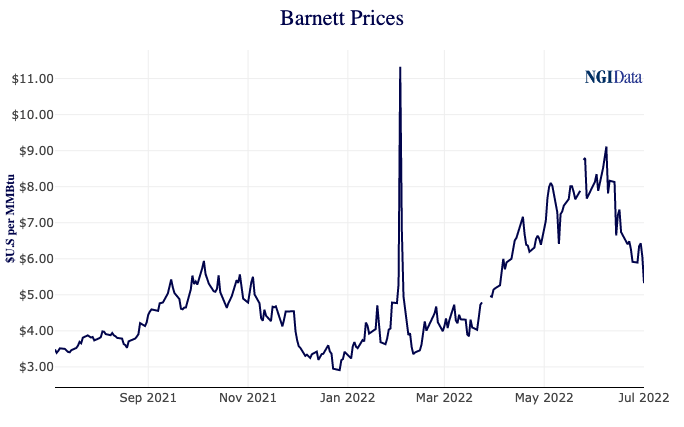 The transaction, first announced in May, includes about 160,000 net acres in the Barnett, primarily in Tarrant, Johnson and Parker counties. They include “low decline wells, ideal for delivering consistent cash flow, and high average working interests of approximately 93% in over 2,100 wells with operatorship positions,” Denver-based BKV said Friday. The deal also includes about 750 miles of gathering pipelines, compression and processing midstream infrastructure.

“We are excited to get started and build upon the strengths and legacy of the XTO team as we drive future growth in the Barnett,” said BKV’s Nick Kunze, vice president of Barnett operations. “The extensive synergistic opportunities already in place allow us to hit the ground running, such as working toward certifying responsibly sourced gas (RSG) at the wellhead through a credible third party and offering additional access to premier Gulf Coast markets, just to name a few.”

BKV announced in June that it is developing a carbon capture and sequestration project in North Texas, adjacent to the Barnett assets, in partnership with EnLink Midstream LLC.

The project, which the companies expect to enter operation by end-2023, would see EnLink transport BKV gas produced in the Barnett to EnLink’s gas processing plant in Bridgeport, TX. Once there, the CO2 waste stream would be captured, compressed and permanently sequestered in an injection well.

“We are excited to welcome approximately 130 new employees to our team, expand our footprint in the Barnett, and move one step closer towards the safe and profitable production of net-zero natural gas,” he said.

Upon closing, BKV’s production and total reserves stand at about 900 MMcfe/d and 5.8 Tcfe, respectively.

BKV boasts more than 7,500 producing wells across 487,000 net acres, along with a natural gas-fired power plant in Temple, TX, with installed capacity of over 760 MW.