Heading into an abbreviated week ahead of the Thanksgiving holiday, FERC last Thursday approved a suite of liquefied natural gas (LNG) projects along the Gulf Coast, clearing second wave export terminals to advance and green lighting expansions at existing facilities. 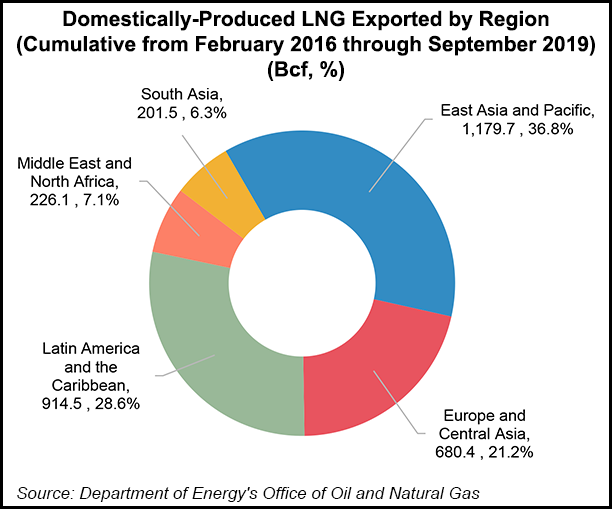 The flurry of authorizations came a day after the Energy Information Administration said exports dipped slightly during the week ending Nov. 20. Twelve LNG vessels, including six from Sabine Pass, three from Corpus Christi, two from Cove Point and one from Cameron departed U.S. shores with a combined capacity of 43 Bcf. That compares to 13 vessels that left carrying 47 Bcf in the prior week.

The federal government also said earlier in November Spain was the top destination for U.S. LNG exports in September. According to the Department of Energy, the European country accounted for 37.9 Bcf, while Japan (28.1 Bcf), India (14.4 Bcf), South Korea (10.8 Bcf) and Mexico (10.4 Bcf), rounded out the top five destinations, representing 63.5% of all domestic exports in September.

Europe has become the kitchen sink for LNG. Both underground storage and LNG inventories are brimming. The global supply glut has forced leading benchmarks down in both Asia and Europe. The trend has tempered the outlook for LNG players, particularly those in the United States, where some second wave projects are in question and where existing facilities continue to confront talk of unprecedented shut-ins next year.

Earlier in November, Singapore-based Pavilion Energy Pte Ltd. reportedly cancelled a U.S. cargo from Cameron LNG in Louisiana. The move is reflective of the tough decisions offtakers must make when demand is tepid and storage is full. Pavilion has a long-term, take-or-pay supply deal with Japan’s Mitsubishi Corp., one of the Cameron project’s sponsors.

Near-curve LNG prices moving into backwardation heightens the risk of shut-ins by eliminating the option to load cargoes for later sale, according to Energy Aspects. This is likely what drove Pavilion’s decision to reject the cargo and puts other U.S. cargoes at risk unless pricing improves.

“When global netbacks were challenging for U.S. exports late this summer, the contango in the near-term curve still offered an incentive to load cargoes for sale on future-dated markets,” Energy Aspects said. “The flattening and backwardation in the LNG near curve eliminate that incentive, meaning all U.S. cargoes need to find a home immediately after export.”

According to NGI data, the maximum Gulf Coast LNG netback price for January delivery between the Dutch Title Transfer Facility, Japan Korea Marker and National Balancing Point on Nov. 27 was $4.544/MMBtu, or $2.501 above where Henry Hub futures settled.

Globally, the bearish sentiment is evident on the shipping front as well.

“More tonnage became available both prompt and into the New Year in the Pacific and while the Atlantic and Middle East remain tight, there’s still not enough requirement in the market to add much positivity to the rates,” ship tracking firm Fearnleys AS said of the week ending Nov. 20.

“Unsold volume still lingers in both basins, and with muted demand, it seems to push product prices down,” the firm added. “That combined with an increase in tonnage availability, have reduced the bullish sentiment the market held not too long ago.”

In other news, the first U.S. exports for Ukraine arrived at a terminal in Poland during the third week of November, marking another milestone in efforts to reduce the region’s reliance on Russian natural gas.

In a statement issued by the White House on Tuesday, building on the administration’s efforts to boost resources in Eastern Europe, President Trump said he strongly supports efforts to diversify Bulgaria’s energy mix.

“Recognizing Bulgaria’s interest in moving toward more efficient and cleaner sources of energy, we will cooperate on increasing the supply of gas from diverse and reliable sources,” Trump said in a joint statement with Prime Minister Boyko Borissov.

The White House said the U.S. intends to send a technical team to Bulgaria to work with officials there on how to further cooperate on energy issues.

Last year, the Trump administration said more U.S. LNG would make its way to Eastern Europe, particularly to Poland, which also has been working to diversify its natural gas supplies and reduce its dependence on Russia.