It was a grand and glorious week of trading if you were a bidweek buyer on any of the market points followed by NGI. 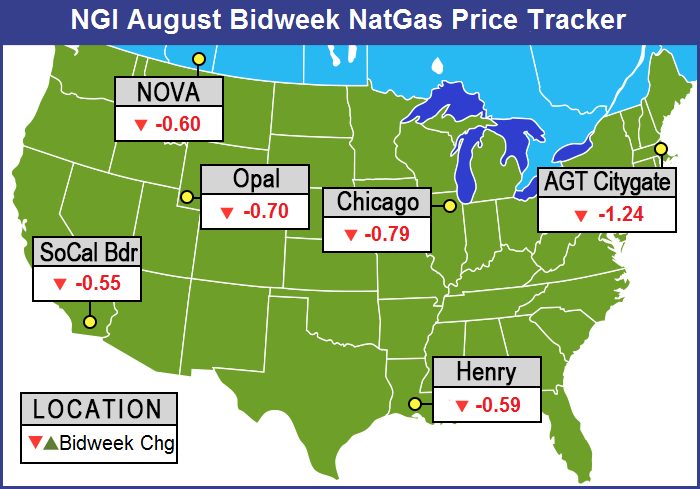 All market points outside of the Northeast tumbled by at least a half dollar. In the Northeast, bidweek losses ranged from $1.24 to 16 cents. The NGI National bidweek average fell 56 cents to $3.46. Of individual market points, Algonquin Citygates came in down $1.24 at $2.95 and Tennessee Zone 4 Marcellus was seen down the least 16 cents to $1.92. Regionally, the Rocky Mountains took the biggest hits, losing between 63 and 76 cents.

East Texas and the Midwest both skidded and points in the Midcontinent fell between 59 and 77 cents.

California points fell between 55 and 66 cents, and South Texas locations dropped between 56 and 63 cents.

August futures settled at $3.808, down 59.2 cents from the July contract settlement.

Lower demand in the form of reduced cooling requirements in major metropolitan areas told the tale of plummeting bidweek prices. According to data from AccuWeather.com, Pittsburgh, PA, for the month of July normally has to endure 245 cooling degree days (CDD), but this July it saw only 188 CDD. Chicago usually sees 338 CDD, but this time around there were only 239 CDDs. Dallas, typically a cooling load “hot spot” in July, usually bakes under 660 CDD, but July 2014 tallied 597.

There seems to be no end in sight to the widening negative Marcellus spot market basis to the Henry Hub. NGI Daily Cash Market Prices July 31 show a gaping -$2.42 basis on Transco-Leidy Line and a similar -$2.54 basis on Tennessee Zone 4 Marcellus. A representative with a major interstate pipeline said, “there are still a lot of people tying into us and we haven’t built anymore takeaway capacity. We are working on some things, but they won’t be available until next year.

“It’s molecules fighting other molecules for a spot in the pipe. The bus can only hold so many people. You can get in the pipeline, but you have to hope someone will take your gas.”

He added that there were also pressure issues. “You have to be able to buck the pressure of the pipeline, and without that you are not getting your gas in anyway. People are putting compression to get it in the pipeline, but the pressure on some pipelines is up to 1,100 psi, whereas the normal operating pressure is between 600 to 800 psi.”

Those negative Northeast basis values are also showing up in the forward market, although the gaps are somewhat narrower. According to NGI’s Forward Look data posted Friday, August basis at Transco Z6 NY was -$1.094 and Algonquin Citygate was -$0.859. However, looking ahead into the winter months, both of those locations turn dramatically positive this winter (see chart) with basis topping $3 and $9 respectively.

Despite Thursday’s gains, traders see the dynamic of ongoing deficit contraction as the primary price driver.

“[B]elow-normal trends are still anticipated across a broad portion of the U.S. with some views stretching to mid-August. This will help to maintain the dynamic of deficit contraction that has been developing this summer in dramatic fashion,” said Jim Ritterbusch of Ritterbusch and Associates. “Despite some moderation in the temp views later next week, we still see a growing likelihood of a season-ending supply of around 3.6 Tcf or more. Renewed production growth is becoming apparent and will accommodate a season-ending supply level significantly less than the five-year average of 3.83 Tcf. Meanwhile, occasional minor tropical storm threats continue to dissipate, and a need to erase some hurricane premium out of the fall contracts may be required with the arrival of August.”

Ritterbusch sees enough speculative capital available to push the market still lower. “While the recent slowing in downward momentum may be suggesting some selling exhaustion, we still feel that the money managers have excess capital to employ toward the short side of this market. Dynamics drive price direction in any commodity, and until the natural gas supply-usage dynamic begins to shift via above-normal temperature trends, placing a bottom in this market could remain elusive.”

He also sees a chart test of $3.72 in the cards and said that the market needs to factor in two additional plump storage builds along with increased production.

Additional stout storage builds notwithstanding, some see a market bottom looming. “The market signals indicate we are likely near a floor for the natural gas market,” said Phillip Golden, director of risk and product management at Energy Market Exchange in Houston. “While the market may come off further, EMEX puts the risk to the upside and would advise clients to give serious thought to taking advantage of the market fall which has occurred over the past month.

“We will still need injection numbers of 80 Bcf/week to refill storage to the levels expected by the Energy Information Administration and to get to the high of 2012, we would need to average 114 Bcf/week. While the record builds are helping us make up the storage deficit, the misses to the low side with mild summer weather is some cause for concern about how strongly the market will continue to build.”

Natgasweather.com said, “The latest weather models are still coming in, but what we have seen is in line with our forecast of warming temperatures the next couple of weeks, especially over the southern U.S., including the high-demand states of Texas, Oklahoma and California. With temperatures warming into the mid-90s and 100s, cooling demand will be quite strong and could support prices regionally. The northern U.S. will still see weather systems tracking through, although they will be quite a bit milder than the recent string of cool blasts.

“What is important is strong bearish headwinds will be easing over the coming weeks, apart from next week’s much larger than normal build that will be factoring in this week’s impressive cool blast.”

As bidweek came to a close Thursday, spot gas deliveries for Friday receipt slipped lower as losses at Marcellus and Northeast points were able to offset gains in East Texas, the Midcontinent and Rockies.

The overall market was broadly mixed, but on average, prices eased four cents. The Energy Information Administration (EIA) reported that working gas inventories rose by 88 Bcf for the week ended July 25. That was slightly below expectations, and September futures rose 5.5 cents to $3.841 and October gained 6.2 cents to $3.867. September crude oil dropped $2.10 to $98.17/bbl.

The day’s market activity was a mix of gains in producing regions offset by weather-driven declines in the East and Northeast.

Along the Eastern Seaboard, however, prices were mostly in the red. Forecaster Wunderground.com said Thursday’s high in New York City of 81 degrees would hold Friday before dropping to 71 on Saturday. The normal high in New York this time of year is 84. Philadelphia’s Thursday high of 84 was seen easing to 82 Friday and 75 on Saturday. The seasonal high in Philadelphia is 83. Washington, DC’s Thursday high temperature of 87 was forecast to fall to 81 Friday and 80 by Saturday. The normal late-July high in Philadelphia is 88.

Near-term weather in the area was seen as unsettled. The National Weather Service serving Washington, DC, and Baltimore reported that “high pressure will remain over the region through Friday…but a series of upper-level disturbances will pass through during this time. A coastal front will develop Friday night…lasting through this weekend into early next week. Upper-level disturbances will continue to move over the area during this time.”

Gas into the Mid-Atlantic was mixed. Packages headed for New York City on Transco Zn 6 fell three cents to $2.27, and deliveries on Tetco M-3 rose a penny to $2.24.

Marcellus gas took it on the chin again. Gas for Friday at Transco Leidy fell 17 cents to $1.32, and deliveries to Tennessee Zone 4 Marcellus skidded 24 cents to $1.20.

Traders were seeing a lot of gas moving north to south. “I think the spreads are pretty tight, and the usual trades are being made. I was talking to a producer who sold gas in the Gulf and was moving Ohio gas south,” said a Houston-based pipeline veteran. “A lot of business is getting done, but it’s moving the other way. The Northeast is fairly mild, and there is not a lot of demand for baseload gas. Storage re-fillers are active, and pipeline maintenance is in full swing. Those with transport who can move through the maintenance issues have no problem, but otherwise it’s tough to take a secondary out-of-path contract and make any money with it.”

The Thursday morning release of storage data by the EIA can be a trader’s delight or nightmare. Often only a few Bcf above or below expectations can cause wide price swings. Today is no different, but the dominant trend has been for storage builds way above historical averages and, in many cases, above expectations as well.

The reported 88 Bcf injection was just short of industry expectations in the low 90 Bcf range, and this was expected to show another large contraction in the storage deficit and be nearly double historical averages. Last year, 57 Bcf was injected, and the five-year pace stands at 46 Bcf. Tim Evans of Citi Futures Perspective calculated an injection of 89 Bcf, and United ICAP was looking for an increase of 93 Bcf. A Reuters poll of 24 analysts revealed an average 93 Bcf with a range of 85 Bcf to 100 Bcf.

“88 Bcf is still a big number,” said a New York floor trader. “It’s quite a bit larger than last year and the five-year average, so I’m not sure why this thing would want to rally. I think this is temporary. There is no reason for the market to rally.”

Inventories now stand at 2,307 Bcf and are 530 Bcf less than last year and 641 Bcf below the five-year average. In the East Region 57 Bcf was injected, and the West Region saw inventories up by 12 Bcf. Inventories in the Producing Region rose by 19 Bcf.

Bentek Energy’s flow model also chimed in with a 93 Bcf estimate. “Total U.S. population-weighted cooling degree days fell for the fourth straight week, dipping below the 70 degree day mark for the first time since the June 27 storage week,” Bentek said. “The relatively mild weather compared to historic norms helped keep Bentek’s total sample of storage injections flat week-over-week. Combined with the low levels of demand were strong production levels, with Lower 48 dry gas production coming in above 68.5 Bcf/d for the week, which is the highest weekly average on record.”

In its Thursday morning 20-day outlook, WeatherBELL Analytics said it sees no significant changes to the pattern of cool temperatures over the next two to three weeks. “[The] overall pattern of transience (lack of hit and hold heat) continues, [and] cool rules next two to three weeks overall,” said meteorologist Joe Bastardi. “JMA [Japan Meteorological Association model] hints at warmer pattern for northern and central Plains for September, [and] SOI [Southern Oscillation Index] has a major negative burst lurking in the coming 10 days, then back to the lackluster mode.”

WeatherBELL calculated diminished cooling requirements over the next two weeks. Nationally, it tabulates 149.3 cooling degree days (CDD), about in line with last year’s 149.2 CDD but well short of a 30-year average of 170.1 CDD.

The National Hurricane Center in its 8 a.m. EDT Friday report said Tropical Storm Bertha was lumbering to the west-northwest at 20 mph and was sporting winds of 45 mph. The storm was 110 miles east-northeast of Barbados and NHC projections showed it hitting the Bahamas and veering to the northeast.