Baltic Exchange CEO Mark Jackson believes the nearly 300-year-old organization “sells trust” to the maritime industry, something that has factored heavily into its entry into the liquefied natural gas (LNG) market. 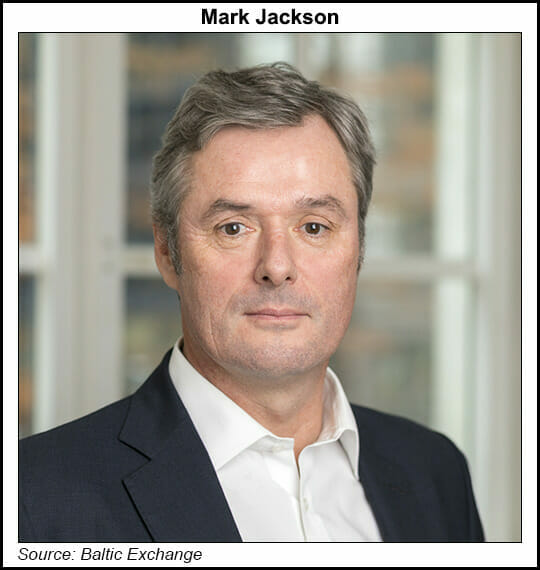 Founded in 1744, the Baltic had its beginnings in the coffee houses of London where merchants and shipowners met. It provided rules for backroom negotiations in the days before marketplace regulations and eventually began providing market information “on the walls,” as Jackson tells it.

Today, the Baltic provides maritime market data for the trading and settlement of physical and derivative contracts. Its indices and assessments are used as a settlement tool for freight derivative trades, for benchmarking physical contracts and as a general indicator of the freight markets’ performance. Its information is used by shipbrokers, ship owners, vessel operators, traders, financiers and charterers across the dry bulk, tanker, natural gas, container and air freight markets.

It began assessing the LNG freight market in 2019. The same year, it won a key listing with CME Group, which launched LNG freight futures contracts based on the Baltic’s assessments.

NGI: What does the Baltic provide for the LNG market specifically?

We also provide a quarterly index tracking daily vessel operating costs for LNG and propane vessels that the market utilizes to benchmark those prices. We also have headline indices providing a general overview of shipping costs in the space.

NGI: Why did you start assessing LNG freight and why are your indices reliable?

Jackson: Because the market came to us and said we need transparency in this marketplace — really from the physical delivery side of things. There was quite a spread on the prices being paid to charter vessels. The shipbrokers and ship owners came to us with the concept of creating freight indices. So, we went through a lengthy process because we have quite a heavy governance structure and released assessments for vessels using marine fuel and LNG fuel.

We have exactly the same number of index panelists each day. When they submit their numbers, there is a lot of data analytics going on to see what numbers we should expect. If they are outside of our expectations, we feel they’re lagging or just using the index as a way of pricing rather than coming back with real arguments, then our team challenges them. Every number, every day is challenged. We then audit the panelists regularly. That is part of the way the Baltic does things, and I think that is part of the reason why people trust our indices so much.

NGI: Why did it take your organization so long to begin assessing the LNG freight market?

Jackson: From the beginning we were looking at that market and we saw that there were only about 600 spot fixtures in a year. We were concerned about whether there was enough transparency in it and whether we were going to get enough information and visibility to make us comfortable. It was the market that came to us looking for these assessments.

NGI: The Baltic won a listing with CME Group for its LNG freight futures contracts. Intercontinental Exchange Inc. now has similar contracts. Is the market likely to adopt and use one of the contracts dominantly?

Jackson: It’s no secret we also licensed our indices to ICE, but they decided to list with Spark Commodities. Apart from the first day when the ICE contracts launched, to my knowledge, they haven’t traded. We’ve got trades going through on our contracts, so the market seems to prefer the Baltic indices. Certainly the brokers themselves prefer the protection that the Baltic gives them. We’re obviously pushing and highlighting the work that goes on behind the scenes from our perspective in terms of robustness, transparency and even knowing what fuel type is used.

Our LNG freight indices are based upon how the physical market works. It’s very much used to hedge freight rather than trying to align with a particular commodity. Where our indices are used and have traction is in physical index linking. The window that we’re pricing is at the time of negotiation. It’s not at the time of the delivery of the cargo. We think that freight negotiation window is more representative of the physical market.

NGI: Is demand to move LNG by ship worldwide growing? If so, has that led to broader growth in the shipping industry?

Jackson: I think people have got a lot of hope for LNG as this sort of transition fuel. And we are starting to see LNG-fueled ships being ordered. But it is still a very small percentage. At the moment, the main driver is a lack of ships. Commodities are cyclical. Energy demand has gone up as the world recovers from Covid-19. There wasn’t much vessel replacement going on because there’s regulatory uncertainty, there’s carbon uncertainty. Looking forward four or five years on some of our indices at the moment, it’s not clear if carbon will be involved in freight costs. It’s a big question that’s making some reluctant to invest in vessels across the shipping sector. The growth potential for LNG is still very high, but it’s coming from a small place relative to others.

When you look at the evolution of spot fixing for high-value ships, it’s very difficult to finance those ships without a long-term contract. Some of these long-term LNG ships were being ordered and they weren’t arriving at the right time. Maybe the export project was delayed and the LNG wasn’t coming on stream. What did that ship do for a year before the plant came online?

It helped create a spot market for LNG. That almost fits the LNG projects better. They’d rather not be completely tied to one relationship. They still want to get a commitment —  they want to know the ship will be there to move the commodity — but they don’t necessarily have to commit to the price now. So index linking is very attractive. You can go into an index-linked contract with the vessel owner, commit the steel to carry the LNG, but you can sort out the pricing later, either through a derivative or you put an option to review rates in that charter.

NGI: How are efforts to curb carbon emissions across the world impacting the Baltic’s business?

Jackson: At the Baltic we provide transparency for the cost of things. We have to keep an eye on everything that’s going on. We have to make sure that we’re translating decisions and regulations that arise into costs.

We have to track carbon. Is it going to be a levy, is there going to be global carbon trading? I personally think it will be a mixture of both. Governments like carbon trading because they can influence its cost and the cap. When it’s a levy, ships can go wherever that levy is cheapest to refuel. That’s very difficult for governments to legislate on.

It’s a bit like the wild west out there, everyone is coming up with different ways to calculate and measure emissions. Everyone is after everyone’s data, it’s quite interesting.

NGI: LNG is becoming more commoditized. The market to buy and sell it has evolved significantly over the last two decades. Has the Baltic done anything new or innovative to respond to that growth, or does it see additional opportunities in the global gas trade?

Jackson: For us, we look at the whole picture. We’re not just after the freight element and aiming for a derivative market. We consider ourselves the heart of the maritimes. We provide dispute resolution for our members, we provide escrow services, we have a code of conduct —  we’re selling trust.

When we introduced our LNG freight indices that was also an effort to teach people how to talk about fixtures properly — classic stuff that we can bring into a new market. There’s no need to reinvent the wheel. Part of our role is to create an even playing field and get the market talking about the same things in the same way. That was the hard work that we had to do early on when we entered the LNG space with our freight indices.

Jackson was appointed CEO of the Baltic Exchange in January 2017.  He previously served as a director and its Chairman from 2009 to 2012. Prior to his time at the Baltic, Jackson worked as a director of dry bulk ship owner and operator A.M. Nomikos & Son (UK) Ltd and the chief commercial officer of Athens-based A.M. Nomikos Group.