A multi-year low may be in the offing for natural gas prices this year, as strong Northeast production compresses Henry Hub pricing and supply continues to overrun demand, analysts said Tuesday. 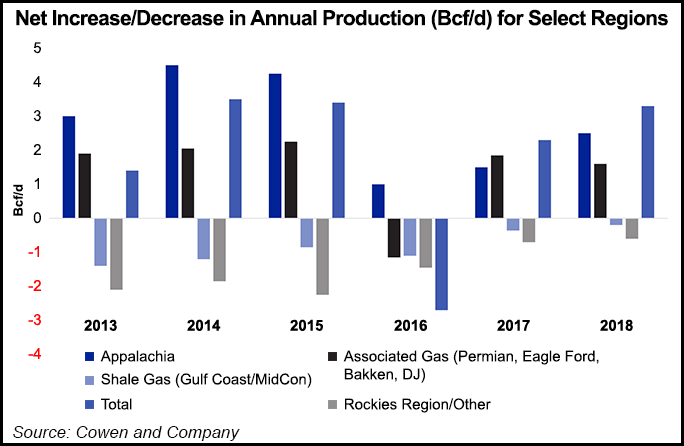 “The demand awakens, but we have a bad feeling about natural gas for 2016,” the analysts said. Their base supply case shows March storage levels above 2 Tcf, even with prices at current low levels.

“Without a cold blast in the late January/February timeframe, our 1Q2016 $2.50/Mcf pricing looks optimistic at this time. We expect to see stored gas competing with produced gas in late March/early April. Without supply being curtailed in the Northeast, natural gas prices likely won’t recover until the winter 2016-17 season. We see $2.75/Mcf in 2017, reflecting the coal-to-gas switching demand returning to coal.”

Cowen is estimating that gas demand will increase by 8.25 Bcf/d over the next three years primarily driven by growth in gas-fired power plants, LNG exports and industrial demand.

Henry Hub pricing beyond 2016 is expected to remain under pressure as the Northeast ramps up more pipeline capacity through 2018. By 2017, new pipeline capacity may outpace supply growth in the Appalachian Basin, which would lead to stronger local pricing and weaker Gulf Coast and Midwest pricing, according to Cowen analysts.

Meanwhile, Northeast producers could see some pricing improvements as operators move gas out, depressing gas growth in other regions.

“The Street consensus for 2016 natural gas pricing is currently at $2.60/Mcf,” the Cowen analysts said. “We see this pricing scenario as unlikely and we assume that winter demand will cause 1Q2016 Henry Hub spot prices to average $2.50/Mcf.”

Through June, an estimated 1-1.5 Bcf/d could be curtailed in the Northeast, with Henry Hub spot prices “likely” collapsing below $2.00/Mcf about that time.

Still, in the long term, Cowen expects Northeast gas producers to be best positioned for better gas prices as differentials narrow. The impact on pricing is forecast to be in 2017, “but early signs of narrowing differentials already exist.”

As an example, interruptible service rates under the planned Rover Pipeline LLC project, which could begin construction this summer, now has an effective rate tariff that comes out to 70 cents/Mcf, “implying that the Dominion South/Chicago citygate (CG) spread will collapse to the cost of transportation once pipeline capacity outpaces supply growth in Southwest Appalachia in mid-2017,” the analysts said.

Basis spreads have collapsed before, notably from 2008 to 2010 when the Rockies Express Pipeline (REX) came online to haul gas to Midwest markets. Rockies producers had difficulty before REX to get gas out of the basin and were forced to sell gas locally at deep discounts.

“After REX came online, however, we see the spread completely collapsing to be almost on par with New York Mercantile Exchange and demand centers, since the additional pipeline capacity allowed producers to easily send their gas to where the demand was,” the Cowen analysts said.

ICF International consultants Kevin Petak and Ananth Chikkatur also are less optimistic about Henry pricing — and Northeast differentials. During a conference call hosted by Deutsche Bank, they pegged Henry to remain at the current $2.30-2.40/Mcf level through the rest of the year and into 2017. The forecast is well below ICF’s estimate in October that expected 2016 gas prices to average $3.36.

“It’s really because the market continues to remain relatively strong from a surprise standpoint,” Petak said. “And the demand is not catching up with the supply…Basically, the wells are coming in bigger. The time to drill the wells is less. There are a lot of efficiencies on the production side of the equation that have evolved. So the Northeast pricing dynamic continues to remain relatively weak.”

On demand specifically, the ICF consultants said LNG and Mexican exports were the bright spots, but they acknowledged Mexican demand could be affected by continued crude weakness. “If a rebound in oil does not occur, they see LNG exports by 2020 around 7 Bcf/d, much lower than their current forecast of 11 Bcf/d, suggesting further weak gas fundamentals,” Deutsche Bank said.

“While recent supply has been slightly weaker than our forecast, demand has been weak and storage levels remain near historical highs,” said Jefferies analyst Jonathan D. Wolff. “We remain bullish gas longer-term as supply should continue to fall while demand growth will tighten the supply-demand balance. Our long-term gas price forecast remains unchanged at $4.00.”