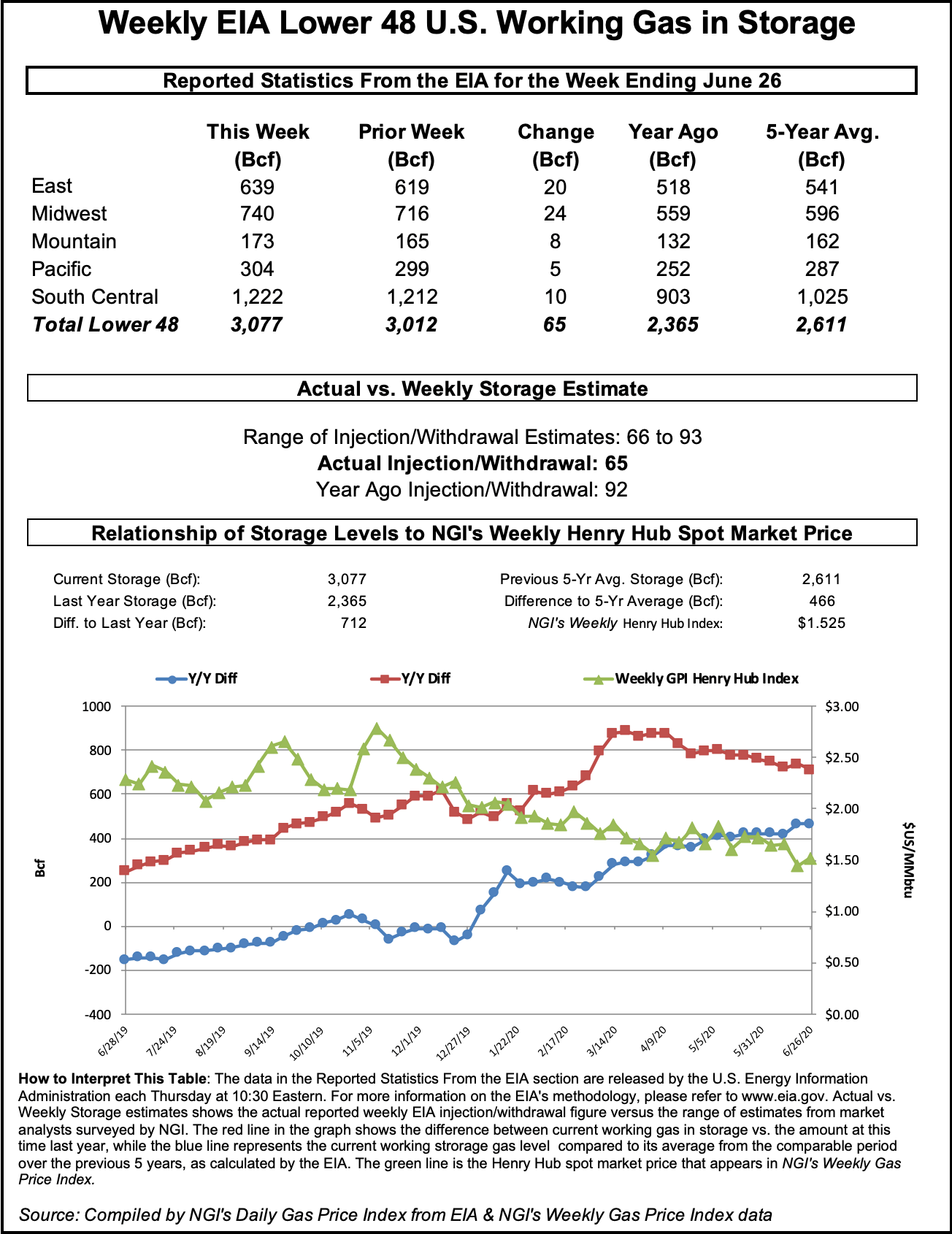 NGI’s Spot Gas National Avg. fell 3.5 cents to $1.455 ahead of the three-day Fourth of July holiday. Markets were to be closed on Friday in observance of the holiday.

The U.S. Energy Information Administration (EIA) on Thursday reported an injection of 65 Bcf for the week ending June 26, a stark change from the prior week’s injection of 120 Bcf.

The latest build compares with the 92 Bcf increase in storage recorded in the same week a year earlier and was directly in line with the five-year average build of 65 Bcf for that week.

Though the coronavirus cloud of uncertainty was hanging over markets and the economic recovery, analysts said the latest injection pointed to supply/demand improvement.

Power burns hit 40 Bcf on Thursday, Bespoke Weather Services said, “and should increase further as we move to hotter days.”

Bespoke said forecasts ahead of the weekend continued to call for lofty temperatures across most of the Lower 48, with gas-weighted degree days “at record levels in our dataset” for the first half of July. “The pattern still favors above normal heat” beyond July 15.

Liquified natural gas (LNG), meanwhile, remained “the big factor weighing on the market, again with volumes of just 3.2 Bcf” Thursday, Bespoke said. “With lower LNG volumes, we will need as much strength from burns as we can get to keep the balance from loosening back up.”

LNG remained far off pre-coronavirus levels as of Thursday, with weak demand from important pre-pandemic export destinations. The pandemic has dampened demand for imports in Europe and Asia. Dozens of U.S. cargos have been canceled for July and August.

To be sure, stockpiles remained high. The latest storage build lifted inventories to 3,077 Bcf, above the year-earlier level of 2,365 Bcf and well above the five-year average of 2,611 Bcf.

The outlook for improved activity was mixed and ultimately mired in the uncertainty caused by the pandemic.

The U.S. jobless rate declined from 13.3% in May to 11.1% in June, the Labor Department reported Thursday, and the domestic economy regained 4.8 million jobs last month as more businesses reopened after lockdown restrictions were eased and more Americans went back to work.

Still, a long road to recovery lies ahead, analysts said, given that the unemployment rate in February, prior to the pandemic, was near a 50-year low of 3.5%. Additionally, with lockdowns lifted and consumer activity building, so too were cases of the virus.

In fact, in the final days of June, the United States recorded daily record case levels several times, and major cities such as New York and heavily populated states such as Texas and California had slowed their re-opening processes.

Against that backdrop, gas production had yet to ramp up, but markets were watching for hints of meaningful change. Baker Hughes Co. reported Thursday that the U.S. rig count fell two units overall, with a three-rig decline in oil-directed drilling but one new natural gas-directed rig.

Spot prices gave up ground Thursday, even as forecasts called for more heat in coming days, ahead of the holiday weekend — a break during which Americans spend relatively little time indoors and cooling demand temporarily eases.

Building off robust temperatures ranging from the high 80s to 100s across most of the Lower 48 over the holiday weekend, NatGasWeather sees even stronger heat in the second week of July.

“The pattern is forecast to be most bullish” from Wednesday to July 14, “as upper high pressure increases in strength and expands to cover most of the U.S., with highs of 90s, while also becoming quite humid across the central and southern U.S. to push heat indexes into the very uncomfortable 95-105 degree range,” the forecaster said. “We expect this hot/bullish pattern to last through at least July 17.”