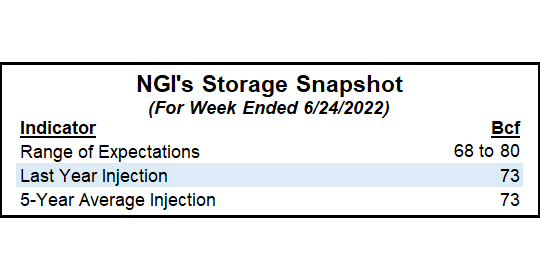 Surveys ahead of the Energy Information Administration’s (EIA) latest weekly storage report, scheduled for 10:30 a.m. ET, show expectations centered around an injection in the low to mid 70s for the week ended June 24.

Last year, EIA recorded a 73 Bcf injection for the similar week, and the five-year average is also a 73 Bcf build.

“It was hotter than normal over most of the interior U.S., while slightly cool over the West and East coasts,” NatGasWeather said of temperatures during this week’s EIA report period. “We expect a build of 75-76 Bcf, although it’s tricky due to the Juneteenth holiday and inconsistent wind energy generation last week.”

“Any reversal from last week’s market-moving bearish EIA surprise, however, could quickly reverse emerging technical weakness in early-morning trading to send the front month contract higher,” Rubin said. “By tomorrow, though, cash prices may fade as traders position ahead of softening spot demand over the long holiday weekend.”

Meanwhile, weather models trended hotter overnight to slightly increase cooling demand expectations over the next two weeks, according to NatGasWeather.

“No changes overall, with a hot pattern expected over most of the southern two-thirds of the U.S. into the foreseeable future for strong national demand, including highs of 90s extending up the East Coast late this week and this weekend,” the firm said.

Overall, the pattern through the first half of July is “plenty hot enough” to drive bullish weather sentiment, NatGasWeather said.

This had the firm pointing to “other reasons for the cause of yesterday’s plunge” in Nymex futures, with weakness in liquefied natural gas (LNG) exports amid the ongoing Freeport LNG outage as the likely culprit.

“A prolonged battle between hot/bullish weather supplies versus soft LNG exports should be expected in the next couple months,” NatGasWeather said.