With demand rising in the United States and forecasts calling for robust increases in crude consumption globally through 2022, more analysts are betting that oil prices this year could exceed $100/bbl. 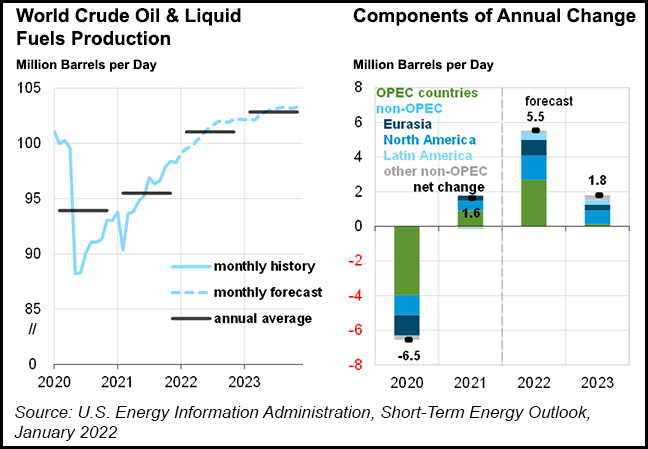 Bank of America (BofA) and Morgan Stanley analysts both said they expect Brent crude, the international benchmark, to reach triple digits in 2022, as producers gradually raise output in the face of mounting demand. Brent recently touched $88.

Morgan Stanley analyst Martijn Rats said stockpiles of crude are expected to dip lower this year after sliding in 2021. He noted robust demand and waning investments in new drilling as producers shift more attention to renewable energy sources. As a result, he said in a note to clients, crude prices are expected to reach $100 in the second half of this year – up from a previous forecast of $90 — and could remain near that level into 2023. He sees a scenario where it could climb even higher.

“If Brent were to stay at $88 per barrel, spending on oil would amount to about 3.5%” of global gross domestic product (GDP) this year, Rats said. “That is still modest in a historical context – it averaged about 4.5% consistently throughout 2011-14. To reach that percentage again, Brent would need to rally to about $110 per barrel, although sizable regions of the world would already be at an oil-burden-on-GDP equal to the 2011-14 level if Brent were to reach $100 per barrel.”

BofA analyst Francisco Blanch, meanwhile, said Brent could reach $120 by mid-year. He said many economies around the world are still recovering, leaving more runway for demand growth this year after a solid rebound in 2021.

An anticipated resurgence of “international air travel on vaccines and prophylactics could pave the way for the endemic phase of Covid-19, enabling oil to benefit from pro-cyclical tailwinds,” he said.

Goldman Sachs Group analysts said earlier this month that demand could reach a new high this year, and oil prices could top $100 at the 2022 peak as a result.

While the Omicron variant of the coronavirus has spread rapidly, it has generally caused fewer serious health complications and deaths. As a result, most governments around the world have resisted the sweeping lockdown measures put in place in 2020 – when the pandemic began – that crushed oil demand that year. This has buoyed the expectations for ongoing demand surges.

In the United States, demand climbed 5% week/week and reached 21.9 million b/d for the period ended Jan. 14, according to the U.S. Energy Information Administration (EIA). The result marked a continuation of the steady rise in demand over the course of 2021 and into this year. Total petroleum products supplied over the last four-week period – EIA’s key barometer of demand — averaged 21.2 million b/d, up 12% from the same period a year earlier. Over the past four weeks, motor gasoline consumption averaged 8.5 million b/d, up 9%, while distillate fuel demand averaged 4.0 million b/d, up 15%. Jet fuel product supplied jumped 32% to 1.5 million b/d.

U.S. production, meanwhile, climbed gradually last year and has held steady early in 2022. For the Jan. 14 period, output held even week/week at 11.7 million b/d. Still, domestic production remains more than 1 million b/d below pre-pandemic highs. At 413.8 million bbl, U.S. stocks are about 8% below the five-year average.

Globally, the International Energy Agency said in a report this month that oil demand climbed by 1.1 million b/d to 99 million b/d in December. The Paris-based agency raised its global demand estimates from an earlier forecast by 200,000 b/d for 2021 and 2022 to growth of 5.5 million b/d and 3.3 million b/d, respectively.

The Organization of the Petroleum Exporting Countries (OPEC) said in its January monthly outlook that it expects strong crude consumption growth in 2022, despite Omicron. OPEC researchers predicted global demand would rise by 4.15 million b/d and that consumption would exceed 100 million b/d in the third quarter, returning demand to pre-pandemic levels.

OPEC production, meanwhile, is on the rise but potentially not fast enough to match demand. Its output averaged 26.3 million b/d in 2021, up 700,000 b/d from 2020, EIA researchers estimated.

Indeed, some OPEC-plus members are struggling to increase production, including war-torn Libya as well as both Nigeria and Angola, which have struggled with deteriorating infrastructure. OPEC and allies known as OPEC-plus recently agreed to ramp up production by 400,000 b/d in February to help align supply with demand, extending a pace of monthly supply increases the cartel began in August. But officials have said member countries have collectively struggled to meet the targeted level in recent months.

“Even if supply issues are patched up, there is still the larger threat of supply chain delays, a lack of supply in labor markets, and overall cost inflation on lifting oil from the ground after costly shut-ins from 2020,” Rystad Energy senior analyst Louise Dickson said. The “theme so far for 2022 is that the oil market is short of the oil supply it anticipated.”