Natural gas futures on Monday advanced for a seventh consecutive session as robust domestic cooling demand and strong liquefied natural gas (LNG) export levels continued to drive up prices that are at their highest levels since 2018. 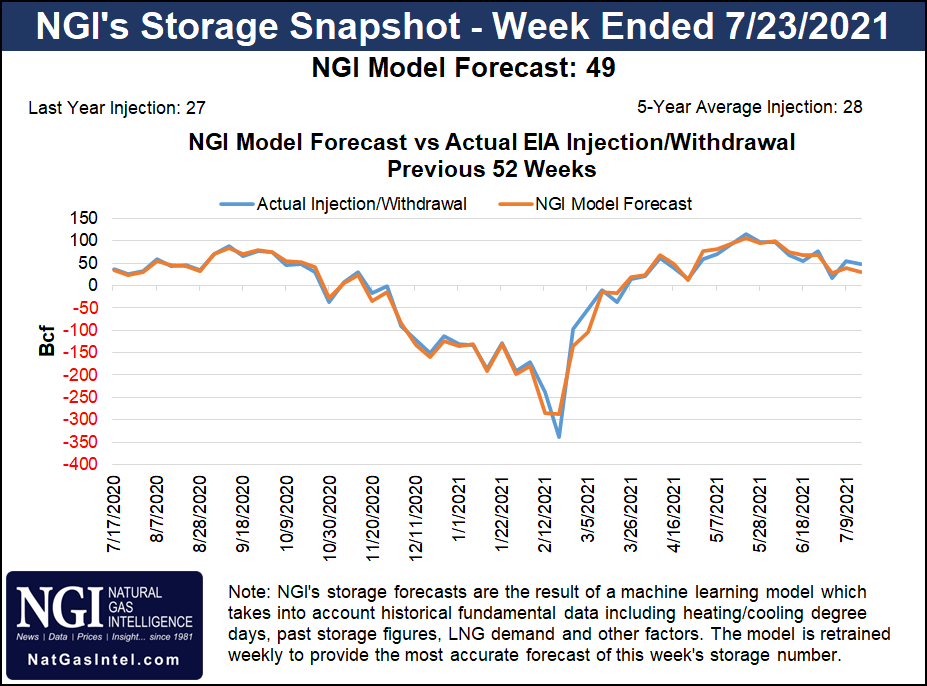 “With the hottest weather of the summer expected to extend nationwide” on Tuesday “and the potential for record electricity demand” in Texas, cash prices and futures were poised for another strong week, EBW Analytics Group said.

“National demand will be strong this week as hot upper high pressure rules most of the U.S. with highs of 90s to 100s,” the firm noted. “Slightly cooler exceptions will occur over the Upper Great Lakes and New England, as weak systems produce highs of 80s, while very warm to hot with heavy monsoon showers over the Southwest.”

NatGasWeather also noted that, with supplies tight in both Asia and Europe, global gas prices are lofty this summer, creating added demand for U.S. LNG exports and providing support for futures.

With demand high, lower levels of U.S. gas are getting stored underground this summer for use later in the year when peak demand is likely to emerge during the winter months. The EBW team said this is adding further upward pressure on futures.

“As the gas market becomes increasingly focused on the second-lowest Lower 48 end-of-season storage trajectory of the past decade, natural gas hubs in the United States may become priced higher in an attempt to draw gas south from Canada,” EBW said.

The U.S. Energy Information Administration’s (EIA) latest storage report showed an injection of 49 Bcf into stockpiles for the week ended July 16. The build lifted stocks to 2,678 Bcf, though that was well below the year-earlier level of 3,210 Bcf and shy of the five-year average of 2,854 Bcf.

If realized, such a build would compare bearishly to historical norms. In the comparable week last year, EIA recorded a 27 Bcf build, while the five-year average is an injection of 28 Bcf. However, storage would remain at a deficit to the five-year norm at this stage of the summer.

“It is our view that U.S. natural gas prices will need to move moderately higher to keep U.S. inventories headed back up closer to the 4 Tcf range,” the Raymond James team said. With “U.S. LNG exports increasing much quicker than nationwide storage capacity, days of inventory in the U.S. natural gas market are getting increasingly tighter.”

“National demand will spike the next few days as upper high pressure expands to cover most of the country besides the Upper Great Lakes and New England,” NatGasWeather said Monday. “With highs of mid-90s to near 100 over most of Texas, and near 90 from Chicago to New York City, demand will be near the strongest levels so far this summer.”

NatGasWeather said cooler trending weather systems were anticipated across the Great Lakes and East July 31-Aug. 4, though national demand was expected to merely step back to normal seasonal levels. Then heat is projected to intensify again, with “hot high pressure over the west-central U.S. shifting eastward Aug. 5-8, increasing coverage of highs into the 90s for the potential for strong national demand returning.”

On the pipeline front, meanwhile, Kinder Morgan Inc. subsidiary Tennessee Gas Pipeline said that, from Monday through Friday of this week, it would perform inspection work at two stations where gas flows south through Kentucky.