In recent months, the Arizona Geological Survey (AZGS) has examined shale oil and natural gas potential in southeastern and westerly parts of the state, in addition to the already exploratory drilled northern formations, particularly in the northeast Four Corners area in which the Mancos Shale is found. 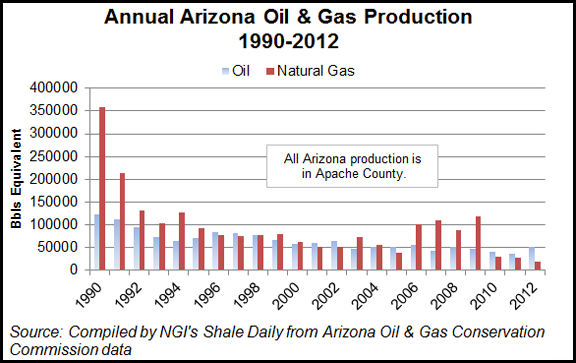 The continuing developments and expansion of horizontal drilling techniques and applications of hydraulic fracturing (fracking) are cited in AZGS’s July Open-File Report, “Potential Targets for Shale Oil and Shale Gas Exploration in Arizona.”

AZGS points out that with conventional drilling techniques, the state’s low porosity and permeability hydrocarbons are uneconomic. But in its latest report it identified 10 rock formations that consist mostly of what it labeled as “shale or phyllite (very low-grade metamorphic shale) that represents potential areas of interest for shale oil and shale gas exploration.”

AZGS acknowledges that many of the units in the identified areas are not likely to have recoverable oil/gas supplies in the known exposures. “Lateral equivalents of these units may be less metamorphosed and so contain recoverable hydrocarbons,” the report said.

It said the potential could be present but so far concealed from geologic analysis, especially in the “structurally complex” southeast parts of Arizona where the AZGS has identified four formations for potential: Fort Crittenden, Apache Canyon, Crystal Cave and the Morenci/Portal Shale.

None of these areas have had exploration wells drilled as have five identified areas in the north, including the Mancos Shale in the northeast corner of Arizona. Mancos has had three exploration wells drilled in Arizona, AZGS said, adding that 56 wells have been logged in the DBK shale in the far northeast corner; 83 more in the Elbert/Aneth Shales and six other exploratory wells in the Bright Angel Shale in the northwest corner and northerly Wolcott Shale (5 and 1, respectively).

AZGS said that during the past decade oil and gas production in Arizona has been pretty much limited to two areas in the northeast on the Navajo Reservation: Dineh-bi-Keyah and Black Rock fields. “New exploration and production technologies could change that by bringing organic-rich shale deposits into play,” said Jonathan DuHamel, a retired geologist and blogger for TucsonCitizen.com.

DuHamel, who has two geology engineering degrees from the Colorado School of the Mines, earlier in the year flagged the AZGS’s shale assessment for the more well-known Four Corners area of the state. In his observations published Tuesday he said “there is more resource potential in Arizona,” citing the latest AZGS report.