Argentina took a step towards securing additional natural gas supplies for this upcoming Southern Cone winter with a new agreement with neighboring Bolivia. 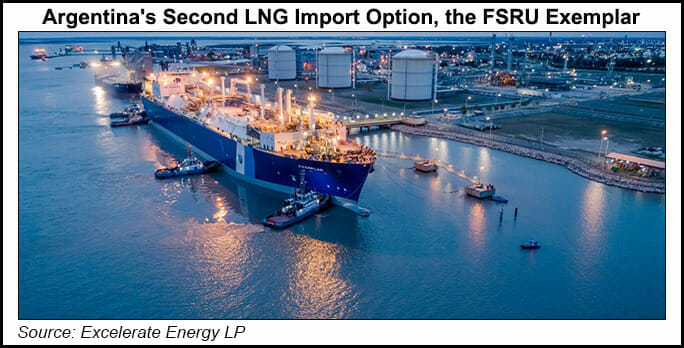 The agreement guarantees Argentina will receive 14 Mm3/d of gas from Bolivia from May to September, the same volume of imports as last winter. Bolivia had initially said it would send out about half of this to Argentina this year.

Additionally, Argentine President Alberto Fernández said that in the event of excess volumes being available in Bolivia, Argentina would “have priority.”

In separate talks, Argentine officials reached an agreement with Brazil to import electricity during the winter months in order to be able to divert some natural gas from power plants to the industrial and residential segments.

Argentina traditionally imports liquefied natural gas (LNG) through its two floating storage and regasification units in winter to meet higher seasonal demand. But given the war in Ukraine amid an already tight global market, LNG is less attractive than in previous years.

Although Argentina has sufficient production to export gas in summer months, the country is also heavily reliant on natural gas. The country uses gas for 58% of its total energy consumption, according to Buenos Aires-based IAE Argentine Energy Institute.

The costs of the Bolivian gas would be $12.18/MMBtu, energy secretary Darío Martínez said. This is about double Henry Hub, but significantly lower than European benchmark prices, which have been as high as $70 this year.

The Bolivian imports would save the country $769 million and replace 14 LNG cargoes during the winter months, Martínez said.

The country’s natural gas buyer, Integración Energética Argentina (Ieasa), in parallel launched a tender in March for LNG cargoes. But there has yet to be a formal announcement on winners and pricing.

Argentina’s winter planning for natural gas coincides with growing momentum for new production from its prolific Vaca Muerta shale gas formation. A new pipeline to get gas to Buenos Aires is also being developed.

Dozens of international exploration and production companies are operating in the shale formation, seen as one of the world’s best resources.

Part of the recent agreement with Bolivia included “an analysis of the opportunities for investment” on the part of Bolivian state oil firm YPFB SA in the shale play.

This week, the local government of Neuquén province, home to most of Vaca Muerta, granted Chevron Corp. a permit for a pilot project with investment of $78 million. “We’re connecting Neuquén to the world. This implies a new development in the northern part of Vaca Muerta, generating more work,” Governor Omar Gutiérrez said.

At a recent conference, the CEO of national oil company YPF SA said that “Vaca Muerta is our most important solution. But we need the right conditions.” He cited the need for additional investment and infrastructure.

YPF is allocating $3.7 billion to capital expenditure this year, which represents a $1 billion increase on last year. About $2.8 billion would go to the upstream, half of which is earmarked for Vaca Muerta assets.