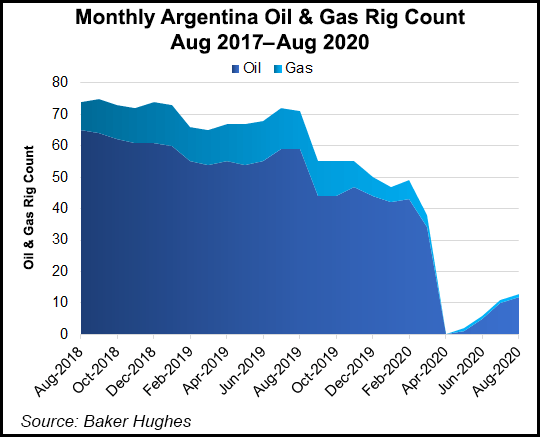 Part of the discussion revolved around a natural gas scheme to boost production in Argentina set to be announced “soon” that could benefit Brazil gas consumers, according to a statement from the Argentine energy secretariat.

The proposed tender system in Argentina would consist of a four-year block auction mechanism, which would differentiate offers for the peak winter season and the rest of the year. Incentivized prices for gas companies would be set at around $3.40/MMBtu.

Argentina is attempting to revitalize the Vaca Muerta shale play, which has seen a significant downturn since the new administration of Alberto Fernández came to power late last year, made worse by the economic impacts of the coronavirus.

Vaca Muerta has been billed as the most promising unconventional play outside of the United States, and many major energy firms hold acreage in the formation. But hydraulic fracturing (fracking) activity has fallen off dramatically, reaching a total of 98 frack stages in August compared to an average of 700 per month in 2019.

There has been recent discussion around a 900-mile pipeline from Vaca Muerta in western Argentina to the southern Brazilian city of Porto Alegre.

The officials also discussed sharing regulatory experiences in an effort to better take advantage of their respective oil and gas resources.

“In oil and gas, we have experience in unconventionals, and Brazil has experience offshore,” Martínez said. “It’s important to share our experiences, so we can enhance development for both Argentina and Brazil.”