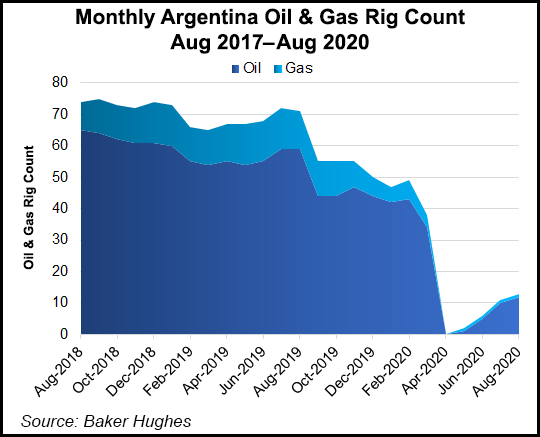 “There is a lot of uncertainty because of the exchange rate, macroeconomic conditions, and fracking activity which is almost halted, not only due to the pandemic effect but because of above ground conditions,” said Alvaro Ríos, the managing partner of consultancy Gas Energy Latin America.

Last week, Argentina tightened capital controls in a bid to bolster foreign reserves, further limiting access to dollars in the squeezed local economy. Meanwhile, Argentina’s gross domestic product fell a record 19.1% in the second quarter compared to the same period last year as the nation maintains strict movement measures in place in its battle against the coronavirus.

“There are 10 to 12 sweet spots in Vaca Muerta, but companies might be hesitant to invest,” Ríos told NGI. “It would not be strange to see more imports from Argentina starting next year, and that is the most likely scenario as we speak.”

Vaca Muerta has been billed as the most promising unconventional play outside of the United States, and many major energy firms hold acreage in the formation. But hydraulic fracturing (fracking) activity has fallen off dramatically, reaching a total of 98 frack stages in August compared to an average of 700 per month in 2019.

Natural gas production in Argentina fell by 12.2% year/year in July to 126.8 million cubic meters/day (MMm3/d), or 4.47 Bcf/d, according to the latest report by the Argentine Energy Institute.

In a bid to kickstart activity, Argentina is finalizing a gas tender program with guaranteed pricing, known as Plan Gas 4. Rios suggests this might not be enough to bring in the levels of constant investment needed to ramp up activity in the shale play.

“Plan Gas 4 has been discussed for three or four months now, but I doubt there will be enough credibility for private investors to commit resources to Argentina with the actual economic and exchange rate conditions,” he said. “In 2018, we saw a huge ramp-up, and then this year it’s plunged.”

As for recent noise from the Argentina government around a pipeline from Vaca Muerta to southern Brazil, Ríos said that “moving gas to Brazil and building a pipeline is very, very far away.

“Political decisions won’t build the pipeline. If one is built, it will be a decision between producers and private sector buyers. We don’t see that pipeline, but what we do see is maybe if new Bolivian exploration doesn’t happen, maybe Argentina gas could be sent through Bolivia to Brazil. The pipeline goes all the way to Sao Paulo. It’s more feasible to do this than build a new pipeline.”