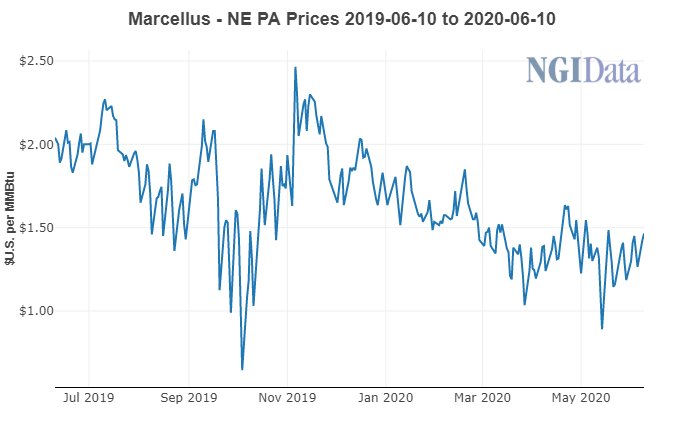 Pennsylvania-based Edge said Wednesday that work has already started to capture production from a stranded well and is expected to continue doing so through 2022, which would provide Exco with another way to monetize its gas at a time when prices remain low and demand has declined due to the Covid-19 pandemic.

Edge, which has recently signed deals with other producers in the state, said it would deploy equipment to the site, including three portable liquefaction units. After purchasing the gas from Exco for liquefaction, it would then be moved to customers in the Northeast via trucks. Edge also said that it expects surplus liquefied natural gas (LNG) from its arrangement with Exco and intends to market it to new customers.

Exco has assets in central and northeast Pennsylvania, where wells are farther removed from demand centers compared to the shale fields of southwest Pennsylvania. Edge CEO Mark Casaday said the company has identified Appalachia as an important area “given its large number of stranded wells.”

The company also expects to deploy its technologies and produce LNG from wells in the Permian Basin and Bakken Shale by the end of the year. The liquefaction units used by Edge can turn 1 MMBtu/day of natural gas into 10,000 gallons of LNG.

Small-scale LNG projects are gaining traction in the United States as some massive second-wave export facilities have high costs and face a challenging market given the global supply glut. They also provide more access to the fuel in areas where pipelines are not located or have become difficult to build due to grassroots opposition. In other areas like the Permian, where associated gas has been flared off at record rates in the recent past, small-scale liquefaction projects offer another way to capture production.

Most recently, Edge was selected by what it said was a large unconventional natural gas producer in north-central Pennsylvania to liquefy Marcellus production from stranded wells in Tioga County. Edge launched last year. It is backed by private equity firm Blue Water Energy and Galileo Global Technologies, which created the Cryobox liquefaction technology deployed by Edge.