Super independent Anadarko Petroleum Corp., which can pick and choose from an array of global prospects, is finding the best options in its own backyard, with plans to again direct nearly all of its 2018 capital to the United States. 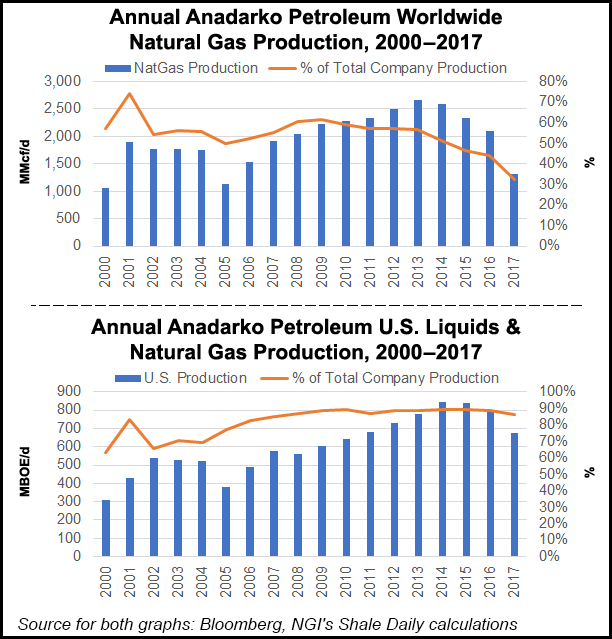 An “improving liquidity mix,” driven by oil growth from the deepwater Gulf of Mexico (GOM), the Denver-Julesburg (DJ) Basin and the Permian Basin’s Delaware sub-basin, is giving the company more confidence in 2018, CEO Al Walker said Wednesday during a fourth quarter conference call.

Some of the confidence comes from an improving bottom line, with net profits reversing to $976 million ($1.80/share) in 4Q2017 from year-ago losses of $515 million (minus 94 cents). Operating cash flow also changed course, improving to $1.4 billion from a loss of $452 million a year ago, while revenue increased to $2.9 billion from $2.4 billion.

Once a natural gas king, Anadarko’s mix is decidedly weighted to capturing more liquids and oil today. The compound annual growth rate for oil over the next three years is guiding at 10-15%, Walker said. And all but 15% of this year’s capital plan is earmarked for domestic ventures.

“We expect stable conventional oil production from the Gulf of Mexico and our international assets and significant high-return oil growth from our Delaware and DJ,” Walker said.

Except for the still emerging Delaware development, the U.S. assets are generating “material free cash flow at $50/bbl…”

In the near-term, there’s nothing finer than the U.S. onshore, said Executive Vice President Danny Brown, who oversees the domestic land portfolio. Roughly $2 billion is earmarked this year alone for the DJ and Delaware.

”Line Of Sight’ On 6 Billion Boe

“We plan to run approximately 12 operated rigs and nine completion crews total between these two positions and deliver year/year oil growth of more than 30% in the DJ and more than 50% in the Delaware,” he said.

“We have line of sight to more than 6 billion boe of stable net resource and decades of high quality inventory” from the two plays.

In the final quarter, total domestic onshore volumes totaled 391,000 boe/d on a divestiture-adjusted basis, an increase of 9% year/year. Oil sales volumes climbed 23% sequentially to 156,000 b/d, with the DJ and Delaware each delivering 20%-plus sequential growth.

As of Tuesday, Anadarko was operating 15 U.S. onshore rigs, nine in the Delaware and six in the DJ.

Midstream affiliate Western Gas Partners LP also is pouring it on to expand infrastructure for Anadarko, with plans to invest more than $1.5 billion total in the U.S. onshore this year to ensure Anadarko has better control over the pace of development and operational efficiency.

“As we’ve seen in the DJ Basin, where we have been in horizontal development mode for more than six years, this playbook has differentiated the Anadarko, and will be a catalyst to predictable and scalable growth from our Delaware Basin assets as we look into the future,” Brown said.

Three completion crews on average were working the DJ between October and December, with a fourth noise-reduction technology crew added in the final month. The company turned 81 wells to sales in the final period. Well costs also continued to tumble through the year, down more than 15% from 2016 and 55% since 2014.

Anadarko last year implemented an updated completion design in the Niobrara formation with the DJ using short- and medium-length laterals. Results to date “have been exceptional,” Brown said. The company has increased its continuous core type curve in the DJ by more than 20% and is planning to test similar designs using long laterals and heavier fluids.

The latest “portfolio changer” is the Delaware, where Anadarko leases nearly 600,000 net acres, almost three times as much acreage as the the DJ footprint. The Wolfcamp A zone is proving most impressive at the moment, with results from an extended flowback test on 30 wells delivering early initial rates “that are more than 25% higher than our current Wolfcamp A type curve,” Brown said.

Anadarko also has completed more than 35,000 acres of trades over the last couple of years to shore up its Permian position, where the land grab is mostly over, Brown said.

“With operatorship capture drilling largely in the rearview mirror, our 2018 focus will be transitioning the rig fleet to multi-well pads developing our campaign area and pacing these activities with the commissioning of several new gas processing plants and regional oil treating facilities,” said Brown.

By the end of this year Anadarko and Western Gas plan to place into service an additional 400 MMcf/d of gas processing and 120,000 b/d of oil treating capacity across the Permian, Brown said.

“We view this infrastructure buildout as another megaproject,” and as such DJ talent has been moved to Texas from Colorado to ensure projects are delivered on time and on budget, Brown said.

Deepwater GOM volumes averaged 143,000 boe/d in the last three months, down sequentially because of deferred output associated with Hurricane Nate. Volumes also were lost after a fire at the nonoperated Enchilada platform in November led to a shut-in.

International and frontier operations averaged 94,000 boe/d in 4Q2017, an 18% decline year/year. The company also reported “meaningful progress” to secure more contracts for its operator-led Mozambique liquefied natural gas export project, but a final investment decision has not been made.

Anadarko’s focus is getting more bang for the buck, said Walker. Operational efficiencies, an “improving” market and strong momentum “provide an exciting backdrop to 2018.

“As we have stated previously, we will complement this capital-efficient investment plan with additional share buybacks, increases to our dividend yield, and improvements to our credit metrics, as market conditions permit, rather than materially increasing our capital expenditures to pursue greater production volume.”

Management is keeping a close eye on volatile commodity prices. Late last year, the company elected to take some 2018 “cash flow risk” off the table, because the forward calendar price for oil was “well above our investment case and ahead of some of the oil price volatility we anticipated on the horizon for oil,” said the CEO.

“As we’ve said publicly, this year price discovery seems particularly fragile” with an improving outlook in the second half of 2018. “Given the seasonal demand weakness,coupled with refinery turnarounds during the first half of the year, we felt like [protecting a] portion of our expected cash was prudent.

“At today’s strip, we will generate significant free cash flow. And as stated before, we do not expect to materially change our investment plans should we realize higher prices than our investment case.”

In light of its cautious enthusiasm, the board has authorized a quintuple increase in the quarterly dividend payout policy to 25 cents/share. Anadarko also has expanded its share repurchases begun last fall to $3 billion. About $1.1 billion of the initial $2.5 billion share repurchases was executed during 4Q2017, and to date this month another 8.5 million shares have been purchased for $500 million at an average price of $58.82/share.

This year’s capital expenditure guidance has been adjusted from last November following the sale of Alaska assets earlier this month to ConocoPhillips, as well as downtime in the GOM. The company now expects full-year capital investments of $4.1-4.5 billion, not including spending by Western Gas.