A confluence of entrenched domestic demand, mounting calls for U.S. exports of LNG and modest production growth – all factors forecast to endure – propelled natural gas futures above $9.00/MMBtu in August and could keep upward pressure on prices for years. 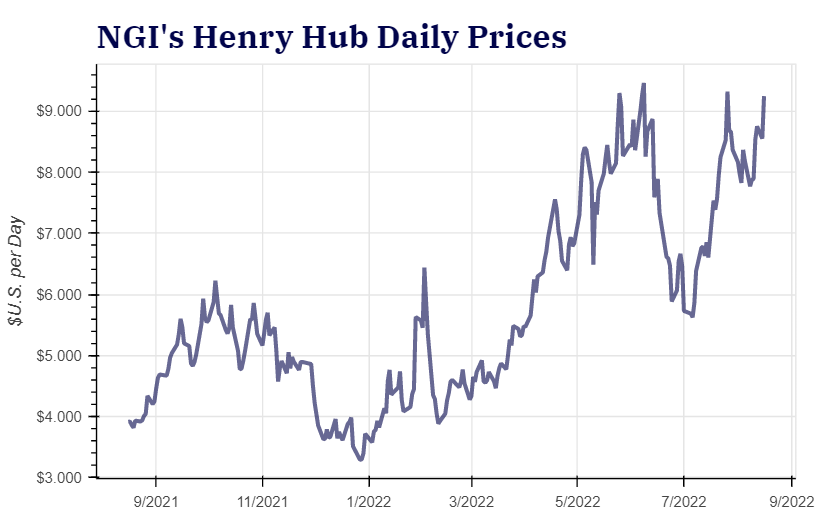 Such was the assessment of analysts who spoke Tuesday at the LDC Gas Forum Rockies & West in Denver. Prices have more than doubled this year and recently approached the highest levels since 2008.

ConocoPhillips’ Matthew Henderson, senior market analyst, said natural gas prices would inevitably ebb and flow with seasons and in response to major news developments. On the whole, though, the bull case is firmly intact given elevated cooling demand in an era of persistently hot summers, including most recently the third hottest July on record last month.

At the same time, many utilities made long-term commitments to natural gas as a principal energy source, minimizing their alternatives. Now, as the United States marches on with coal plant retirements and an emphasis on cleaner energy, it is increasingly difficult to switch from gas to coal when prices for the former spike, as was the practice in the past, Henderson said. This effectively cements reliance on natural gas and adds a fixed demand element to the market.

What’s more, he said, large-cap public exploration and production (E&P) companies are under pressure from Wall Street to pay down debt and return excess capital to investors – rather than ramp up output to capitalize on high prices.

As such, production growth is modest this year and likely to remain so in coming years, according to Henderson, making it difficult for supply to keep pace with demand.

“The market is going to have a harder time balancing in the future,” he said.

E&Ps are increasing activity in the Permian Basin and in the Haynesville Shale, though at measured paces, Henderson said. Production in the Northeast, concentrated in the Marcellus and Utica shales, meanwhile, has tapered off to maintenance levels, he said, largely because of pipeline constraints.

In aggregate, production is only ticking up at a time when more U.S. supplies are needed to meet both domestic demand and a growing global liquefied natural gas market.

Energy Analytics consultant Laird Dyer agreed. He noted that demand for LNG, already strong heading into 2022 amid weak supply levels in Europe and Asia, was amplified this year following Russia’s invasion of Ukraine. European countries ratcheted up their calls for LNG as they moved to wean themselves off Russian gas in protest of the war.

“And that’s not a good thing if you aren’t adding production,” Dyer said. All indications during second quarter earnings season, he added, suggest big E&Ps will remain disciplined through this year and likely next.

“Rig deployments are going to stay low” relative to past eras of high prices and “supply is at risk,” he said.

Dyer expects prompt-month natural gas futures to average $8 next year, essentially extending the lofty prices reached this year. That outlook is based on average weather during the coming winter.

If conditions prove particularly cold over prolonged periods, or if there are weather-induced shocks to production such as late-season hurricanes or widespread winter freeze-offs, supply/demand imbalance could worsen substantially. Prices, Dyer said, may climb to $13 or higher.

“We could see some pretty horrific numbers,” he told the audience in Denver.

In fact, he added, had a fire not forced the Freeport LNG export facility offline in June,  preserving about 2 Bcf/d for domestic consumption this summer, prices could have surged into the double-digits by now.

Freeport is expected to reopen this fall and substantially more LNG capacity is expected to come online in 2024 to serve the global market. Still, Dyer said it was not clear that production could keep up.

Demand for Sapphire’s services is surging. “We’re just seeing demand continue and continue to increase,” Zimowski said at the forum in Denver.

While Europe is fueling the LNG frenzy for the super-chilled fuel now, demand long term likely will be driven by Asian countries such as China, India and South Korea. Those countries are beginning to move away from coal, said Andrew Browning, president of the Western States and Tribal Nations Natural Gas Initiative. The group advocates for more LNG infrastructure.

Participants at the conference also emphasized that LNG demand from Argentina, Brazil and Chile is elevated, as is Mexican demand for U.S. gas delivered via pipeline.

“In my opinion,” he said, “we’re going to need just about everything to meet growing energy demand.”