With persistently low oil prices keeping the cost of gasoline down, Americans’ view of the oil and gas industry has improved to a near 15-year high, according to a Gallup poll released on Monday. 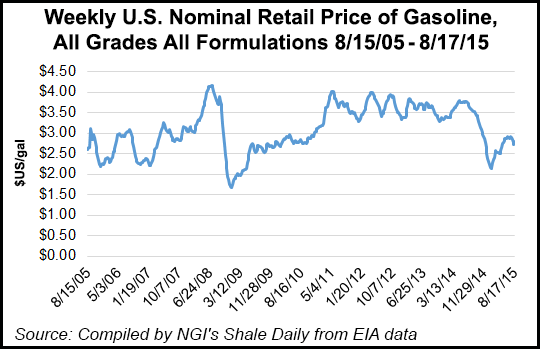 Gallup’s annual Work and Education poll, which gauges the views of 25 different business or industry sectors, found that 34% of Americans surveyed said they have a positive view of the oil and gas industry, up 12 percentage points from 2012 and just one point lower than the 15-year high of 35% recorded in 2003 (see Daily GPI, Aug. 31, 2012).

Gallup said ratings have likely improved as the average price of gasoline has declined by more than $1 since 2012. Not surprisingly, Gallup has found a strong relationship between the price of gasoline and Americans’ viewpoint of the industry over the years. From 2001-2003, when the August price of a gallon of gasoline in the U.S. averaged about $2, adjusted for inflation, the industry’s positive rating was higher than the historical average of 23%.

Likewise, perceptions of the oil and gas industry fell to an all-time low of 15% in 2008, when national gasoline prices averaged $4.09/gallon. Perceptions were flat through 2012 as gasoline prices remained volatile. But pump prices have pushed lower with oil’s precipitous fall. Currently, the average price for a gallon of regular grade gasoline is $2.59, down from $3.43/gallon at the same time last year, according to the automotive group AAA. Last month’s average price was $2.73/gallon.

The oil and gas industry, however, still has one of the lowest favorability ratings among the other 24 industries analyzed. Gallup said 47% of those polled had a negative view of the industry, making it the second lowest sector on the list above the federal government, which has been the lowest-rated sector for three of the last five years. By comparison, the computer and restaurant industries had the highest ratings, with 60% or more saying they had a positive view of those sectors.

The poll is one of 12 that has been conducted annually since 2001 as part of Gallup’s social series in which it surveys on public opinion. The Work and Education poll was conducted between Aug. 5-9. Gallup interviews a minimum of 1,000 adults for surveys in the series.