Airlines see the idea of reducing greenhouse gas (GHG) emissions through alternative fuels as a positive, but an eight-fold increase in fuel cost may stand in the way of landing on net-zero targets on time. 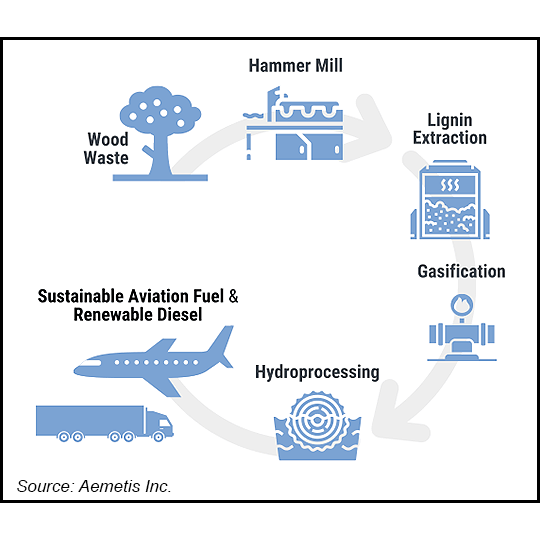 Supermajors BP plc, Eni SpA, Chevron Corp., Shell plc and TotalEnergies SE are among a cadre of operators that are producing SAF, with growth expected to continue as airlines clamor for supply.

Still, there are questions as to whether supply is capable of meeting the 100% SAF demand goal by 2050.

Before the pandemic swept the world in early 2020, the U.S. Department of Energy (DOE) estimated that in 2019, “U.S. airline carriers consumed over 20 billion gallons of petroleum-based jet fuel,” Mavez said.

Domestic SAF production was around 4.5 million gallons/year in 2021. By 2030, current White House projections estimate that production may only reach about 1.63 billion gallons/year, “but this would still only meet under 4% of 2019 baseline jet fuel consumption,” Mavez said.

To meet the Biden administration’s 3 billion gallon/year target, the industry would have to increase its annual supply by about 1,200 times, according to the DOE.

Yet the SAF industry is a “very small industry,” said NGI’s Shaylon Stolk, senior energy analyst. “It’s hard to make projections about how this will play out on a large scale. Currently, the cost per gallon for SAF is up to eight times that of traditional jet fuel.”

Mavez said “price plays a large factor as well. SAF, as with other sustainable fuels, can be multiple times more costly than their conventional fossil fuel counterpart.”

However, the Inflation Reduction Act signed into law last month by President Biden could paint a brighter picture for the fuel as the law encourages more use and production through a $1.25-1.75/gallon tax credit for SAF blenders, Mavez noted, though, it might not be enough to meet the administration’s goal to decarbonize the aviation sector by 2050.

“Much of the value to producers stems from the environmental credits generated,” he said.

“As with renewable natural gas, production of SAF generates” a renewable identification number, and often a credit from California’s low-carbon fuel standard, “all of which are tradable commodities,” Mavez said.

“There is very little data on SAF production, but according to what’s available, it seems like a very steep climb to reach 20% carbon reduction targets by 2030 in the aviation sector at our current pace, let alone zero-carbon goals by 2050,” Mavez said.

The fuel is “heavily regulated,” not only to ensure carbon reduction, “but to also ensure safety measures are addressed,” he noted.

One of the key benefits of the aviation fuel is that it is considered a drop-in fuel, and so “SAF must have the same qualities and characteristics as conventional jet fuel, meaning aircrafts or their engines won’t need to be redesigned,” Mavez said.

“Since SAF can be a blend of renewable and traditional jet fuel, fossil fuels are still needed. As oil production struggles to keep up with ramping demand, alternative options are needed.”

“For example, biogas is often produced in rural areas away from existing gas infrastructure and needs to be transported from the production site to the buyer,” Stolk said.

One avenue to increase supply of SAF feedstock could be “an incentive program for farmers to either grow energy crops for biomass or otherwise use land for producing SAF could make this more economically feasible,” Stolk added.

Many of the world’s major airline associations, including Oneworld Alliance, SkyTeam and Star Alliance, are committing to bring down GHG emissions, which means demand for SAF is likely to continue to rise.

SAF today is the main option for airlines looking to decarbonize. Other avenues, such as liquid hydrogen and electrification, are not yet ready for large-scale market use.

“Current methods for creating hydrogen at commercial scale are expensive,” Stolk said. “The low density of hydrogen means more space is needed to carry fuel,” compared with SAF, which has a comparable energy density to traditional jet fuel. In addition, some “steel and aluminum alloys, which are commonly used in the aviation industry, are vulnerable to hydrogen embrittlement.

“As far as electrification, current battery technology just isn’t there yet,” Stolk said. “We don’t have batteries that can store enough electricity to power a large aircraft and are lightweight enough for flight.” In addition, jets, unlike electric vehicles, “can’t just pull over and recharge the same way…flight length is also limited by battery capacity.”