Chevron Corp., one of the largest oil and natural gas producers in the world, is moving swiftly to capture lower carbon energy opportunities, with a bevy of partnerships announced in recent weeks designed to build its market share. 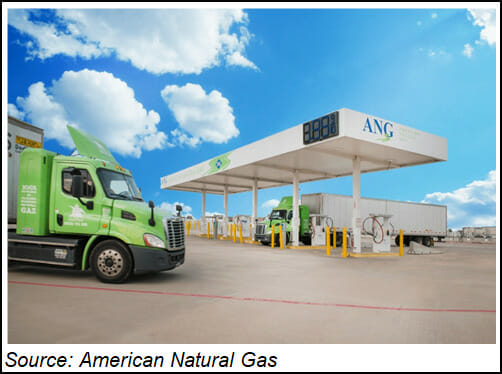 The San Ramon, CA-based supermajor is expanding its reach into the U.S. compressed natural gas (CNG) market and is working on renewable fuels deals that would advance hydrogen and sustainable transportation for rail and jets.

The flurry of announcements comes only weeks after the Chevron New Energies unit was launched to hold the lower carbon businesses. Executives plan to lay out their vision for how Chevron is looking to pull the business forward during a presentation on Tuesday (Sept. 14). ​​

In one recent joint venture (JV) announcement, Chevron U.S.A. Inc. and Mercuria Energy Trading plan to own and operate American Natural Gas LLC (ANG), which has a network of 60 compressed natural gas (CNG) stations across the United States.

“Chevron is committed to producing a tenfold increase in renewable natural gas volumes by 2025 compared to 2020 as part of our higher returns, lower carbon strategy,” Waltz said. “This acquisition will advance our renewable natural gas business in support of customers who want to reduce their carbon footprint.”

Chevron already has RNG partnerships in the United States in place with Brightmark LLC and with California Bioenergy. The supermajor is aiming to open more than 30 branded CNG stations across the country by 2025.

In another collaboration, Caterpillar Inc. and Chevron plan to develop hydrogen demonstration projects. The projects would be centered around transportation and stationary power applications, including prime power.

“The goal of the collaboration is to confirm the feasibility and performance of hydrogen for use as a commercially viable alternative to traditional fuels for line-haul rail and marine vessels,” Chevron noted.

Linked to the venture and with an assist by Caterpillar’s Progress Rail, the partners plan to demonstrate a hydrogen-fueled locomotive and associated hydrogen-fueling infrastructure. Work on the rail demonstration would be done at various sites across the United States.

“Through Chevron New Energies, Chevron is pursuing opportunities to create demand for hydrogen – and the technologies needed for its use – for the heavy-duty transportation and industrial sectors, in which carbon emissions are harder to abate,” said Chevron New Energies President Jeff Gustavson. “Our collaboration with Caterpillar is another important step toward advancing a commercially viable hydrogen economy.”

Caterpillar’s Joe Creed, who is group president of Energy & Transportation, said the goal is to “provide customers with the capability to use their desired fuel type in their operations.” Working with Chevron, he said, “is a great opportunity to demonstrate the viability of hydrogen as a fuel source.”

In another hydrogen venture, Chevron is acquiring an equity interest in Aces Delta LLC, which is working on the Advanced Clean Energy Storage project in Delta, UT. Aces Delta is a JV between Mitsubishi Power Americas Inc. and Magnum Development LLC.

The project, adjacent to the Intermountain Power Plant, would produce, store and transport green hydrogen at utility scale for power generation, transportation and industrial applications in the western United States.

“The potential to partner with Mitsubishi Power and Magnum Development on the Advanced Clean Energy Storage project presents an exciting opportunity that would bring together our unique strengths and would provide a scalable platform to supply our customers with affordable, reliable and ever-cleaner energy,” Gustavson said.

Meanwhile, Chevron and Bunge North America Inc. have a memorandum of understanding (MOU) in place for a proposed JV to develop lower carbon intensity feedstocks. Bunge Ltd. is a leading global producer of oilseed and grain products. Once the JV is finalized, the partnership would establish a supply chain from farmer to fueling station for each company.

Bunge would continue to operate the facilities, while Chevron would have offtake rights to the oil to use as renewable feedstock to manufacture lower carbon diesel and jet fuel.

“Through our commercial work with Bunge, we have come to appreciate their strong company culture, their strategic desire to advance the production of lower carbon fuels, their commitment to capital discipline and promotion of sustainable agriculture in their supply chains,” said Chevron’s Mark Nelson, executive vice president of Downstream & Chemicals.

Up, Up And Away

The companies are looking to create a “common, more transparent model for analyzing potential greenhouse gas emissions reductions that could then be adopted by organizations considering SAF programs,” Chevron noted.

For its part, Chevron is looking to produce a test batch of SAF at its El Segundo Refinery in California. It then could sell SAF to Delta at Los Angeles International Airport, a major global hub for Delta’s fleet.

“As aviation continues to define a more sustainable future, understanding the environmental impacts of our operations will be paramount as we look to mitigate climate change,” said Delta’s Amelia DeLuca, managing director of Sustainability.

“On top of being the first carbon-neutral airline on a global basis, we’ve pledged to replace 10% of our jet fuel with SAF by 2030. This partnership has the potential to help us achieve that goal while providing important data and analytics that demonstrate the environmental integrity of our commitment.”

In parallel, Google Cloud plans to build a data and analytics framework to securely ingest and analyze emissions data from Delta and Chevron related to the SAF test batch. The goal of the pilot would be to provide better visibility into improved reporting of SAF emissions.

In another SAF venture, Chevron secured a letter of intent with Gevo Inc. to  invest in building and operating facilities to  process inedible corn.

Through the proposed collaboration, Gevo would produce SAF and renewable blending components for motor gasoline. In addition to co-investing with Gevo in other projects, Chevron would have the right to offtake 150 million gallons/year.