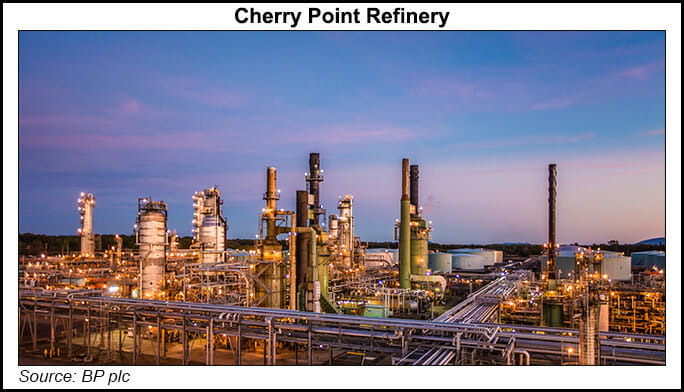 The projects, slated to create 200-plus construction jobs, 25 engineering jobs and 40 support roles, align with the integrated energy major’s goal to be net zero emissions across its operations by at least 2050. BP also has set a goal to reduce by half the carbon dioxide (CO2) intensity of the products in the next 30 years.

“BP’s new investment in Cherry Point builds on a half century of innovation in Washington state,” said BP America President David Lawler. “It will position us to provide lower carbon energy while creating jobs and reducing emissions in our operations.”

In the Hydrocracker Improvement Project (HIP), estimated to cost $169 million, BP plans to improve efficiency and reduce planned maintenance, resulting in fewer unit shutdowns and associated flaring events. Work is to begin this year and be completed in 2023.

The planned Cooling Water Infrastructure Project (CWI), estimated to cost $55 million, is designed to increase utilization and efficiencies, while reducing CO2 emissions. The CWI project, also scheduled to be completed in 2023, would enable the refinery to maintain an optimum cooling water temperature year-round.

The HIP and CWI projects together are estimated to reduce CO2 emissions from operations by 160,000 tons/year, or 7%, which is equivalent to taking more than 32,000 U.S. cars off the road, BP noted.

Meanwhile, the Renewable Diesel Optimization (RDO) project, in which $45 million is being invested, should more than double annual production capability to around 2.6 million bbl.

Renewable diesel is manufactured from biomass-based feedstocks, such as vegetable oils and rendered animal fats. The increased production capability from the RDO project is expected to reduce the CO2 emissions resulting from the diesel produced by Cherry Point by about 400,000-600,000 tons/year, BP said.

In 2018, Cherry Point became the “first and only refinery in the Pacific Northwest capable of processing these feedstocks alongside conventional feedstocks such as crude oils,” BP noted. Fuel produced through co-processing is “chemically identical to petroleum diesel” and can be distributed using the same systems. The additional renewable diesel production is expected to be available next year.

Renewable diesel projects are proliferating by the energy majors and some midstream operators.

Chevron Corp., for example, has a host of alternative energy ventures underway, including in renewable diesel. ExxonMobil has an agreement with Global Clean Energy to purchase up to 5 million bbl of renewable diesel; commercial production should begin in 2022. Calgary-based Imperial Oil Ltd., majority owned by ExxonMobil, in August said its Strathcona refinery in Edmonton could add up to 20,000 b/d of renewable diesel to the mix as soon as 2024.

In the midstream sector, Energy Transfer LP earlier this year formed the Alternative Energy Group to focus on renewable energy projects including diesel that could be transported through its Lower 48 pipelines. And Kinder Morgan Inc. in September said it was partnering with Neste to create a hub at its Harvey, LA, terminal to manufacture renewable diesel, sustainable aviation fuel and renewable feedstock for polymers and chemicals.