Sub-Saharan Africa (SSA) is looking to boost its natural gas exports over the next eight years, a supply source that could help supplant the loss of Russia’s imports to Europe. 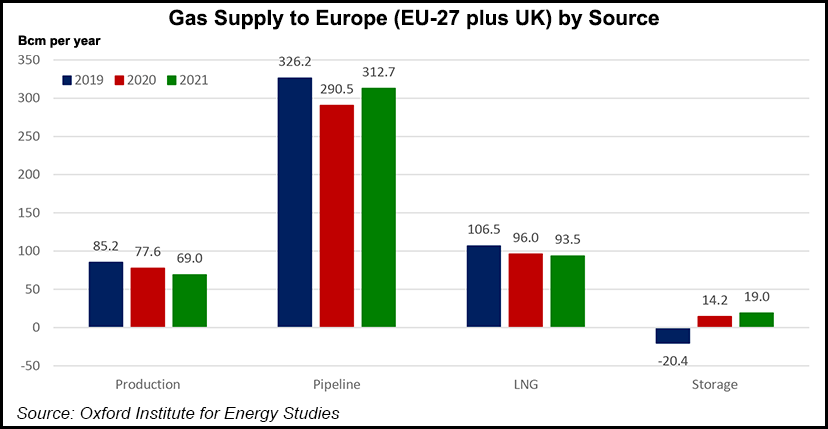 The SSA could expand liquefied natural gas (LNG) exports to 60 million metric tons/year (mmty) by 2025 and to another 74 mmty by 2030, according to the Johannesburg-based African Energy Chamber.

Members of the European Parliament and government officials recently met with African state energy companies to discuss supply agreements and financial investments. SSA LNG projects have attracted renewed interest, especially as Europe has moved aggressively to reduce its reliance on Russian natural gas since the invasion of Ukraine.

Europe is aiming to replace a portion of the pipeline imports from Russia with LNG. However, supplies of the super-chilled fuel are forecast to be tight through 2025. Around 60-70% of global LNG supply “is tied up in long-term contracts,” said Poten & Partners’ Jason Feer, global head of Business Intelligence.

“In the meantime, we only see 20 million metric tons of new supply this year, and then 10 mmty from 2023 to 2025,” Feer told NGI. Europe has been in discussions with buyers and sellers across the world to tap into the tight market.

However, here are challenges for SSA’s LNG projects.

“While Europe is looking for additional LNG in the near to medium term, their focus remains very much to transition out of fossil fuels as soon as feasible,” Rystad Energy analyst Kaushal Ramesh told NGI. “Therefore, not all of the large capacity additions planned across SSA will be able to find a long-term home in Europe.”

Africa must also compete with another top Atlantic Basin supplier, the United States. U.S. LNG projects have more spare capacity. New terminals and expansions in the country are also due to come online more quickly than many SSA projects. The United States pledged last week to send another 15 Bcm of LNG to Europe this year.

“In general, the LNG market is now replete with an unexpected boom-time optimism that could result in hopes of large capacity additions despite underlying regional and energy transition-related challenges,”  Ramesh added.

The SSA region faces political issues as well. For instance, Ramesh said planned capacity additions include the now delayed Mozambique LNG, Rovuma LNG and Tanzania LNG projects. All are in the south Tanzania/North Mozambique region, prone to bouts of violence.

“These dampen the development outlook due to the risk of construction delays, unless a long-lasting solution Is found,” Ramesh said.

Tanzania expects to recover from its previous problems to benefit from Europe’s renewed interest in their gas reserves. President Samia Suluhu Hassan, in office since March 2021, is luring investors back by amending laws to attract investment.

Equnior ASA and Shell plc are expected to conclude the second phase of negotiations on the Tanzania LNG project by June, according to media reports. The Tanzanian government may allow the LNG project to double production to 15 mmty, with the earliest start-up date now slated for 2030.

Additionally, Mozambique expects to continue with its LNG plans despite a rise in violence among militants with ties to the Islamic State Group. TotalEnergies SE plans to restart work on the project this year after it was put on hold amid violence in 2021. Exports could ultimately begin by 2026.

Eni SpA’s 3.4 mmty floating LNG vessel Coral-Sul is set to begin exports in October. However, ExxonMobil’s 15.2 mmty Rovuma LNG is not expected to start operations until 2029.

Angola’s state-owned Sonangol EP, in partnership with BP plc, Eni and TotalEnergies, is developing another $12 billion offshore LNG project.  Meanwhile, Equatorial Guinea’s 3.7 mmty  project on Bioko Island has plans to become a global gas hub, and is in discussions with Cameroon as well, to process additional gas for export as LNG.

Nigeria’s six-train LNG export facility has a capacity of 22.5  mmty, with plans to expand to 30 mmty by adding a seventh train. But the seventh train is not likely to be completed until 2024.

Senegal and Mauritania are also constructing a new LNG export hub as part of the $5 billion Greater Tortue Ahmeyim project to produce up to 30 mmty for domestic use and export.

Overall, the projects are nowhere near close enough to completion to significantly meet Europe’s need for additional supplies.

“Overall the current outlook is that volumes out of Africa may contribute marginally to alleviate the crisis,” Ramesh said, “but are far from replacing any material proportion of the volumes from Russia.”