The 20th century was the Oil Age, but the 21st century will be a mix of the old and the new, from natural gas to batteries to renewables, according to the chief of Royal Dutch Shell’s integrated gas and new technologies division. 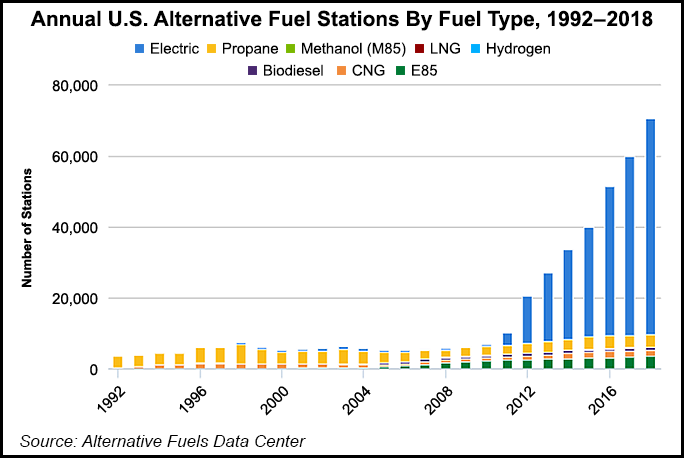 Maarten Wetselaar shared the supermajor’s vision about the future of transportation fuels in Houston on Monday at CERAWeek by IHS Markit. Oil has powered the transportation world more than any other fuel for more than a century, but it is increasingly sharing space with a varied mix of fuels, he said.

The Shell executive vividly illustrated for the audience the pivotal oil strike in Beaumont, east of Houston in 1901. Spindletop “erupted from the earth at a rate of 100,000 b/d for nine days straight. This was a big moment for Texas…a big moment for the U.S.A…and a big moment for transport.”

Giving a nod to CERAWeek Chair Dan Yergin, Wetselaar noted that the 1991 Pulitzer Prize winning The Prize: The Epic Quest for Oil, Money, and Power details the rise of the oil age.

Before Spindletop, oil primarily was used for lighting and as a lubricant. However, “the oil drilling frenzy that followed went on to dramatically boost worldwide oil production and kick off a rivalry between transport fuels…

It’s time for the transport sector to change again, he said. “Transport needs to radically reduce emissions to limit global warming and improve the quality of the air we breathe.”

Some researchers predict batteries will triumph, as the International Energy Agency (IEA) has forecast that the total number of battery electric cars in the world will increase to 280 million in 2040 from around three million today.

“This sounds like another Spindletop moment for transport, a moment of sudden change, but it is not. Because the IEA expects the total number of cars to grow to two billion by 2040.”

Instead, the battle between transport fuels should not be over one solution but an evolving balance, Wetsellar told the audience.

For example, Shell in January acquired U.S. battery charging company Greenlots. However, it also invests in biofuels and hydrogen infrastructure. It also is one of the world’s leading investors in liquefied natural gas (LNG) not only to power stranded areas, but also as a fuel.

LNG is “increasingly used for shipping,” he said. “LNG is cleaner-burning than the fuel oil that is used for ships.” To that end, Shell two years ago struck a deal with ship cruise operator Carnival to supply the world’s first LNG-powered cruise ships.

“Starting this year, Shell will refuel these cruise ships using a floating filling station in the southeast of the United States,” Wetselaar said.

The LNG-powered ships had itineraries to travel to northwestern European and Mediterranean ports using Shell’s infrastructure in cruise ports to refuel throughout the itineraries. The vessels, equipped with dual-fuel engines, are considered the first of a new generation of cruise ships fully powered by LNG in port and at sea — an industry first, according to Carnival.

Still, oil is not joining the horse-drawn carriage in museums anytime soon. The focus has to be on transport fuels “that nearly all of the 7.5 billion people on earth use today,” Wetselaar said. Fuel makers, vehicle makers and policymakers “should all continue to improve the efficiency of internal combustion engines.”

He also stressed another goal of Shell’s: to reduce and/or offset carbon dioxide (CO2) emissions. Shell has been working on techniques to capture and store CO2 safely “and will increasingly look for solutions in the natural world to reduce the concentration of greenhouse gas in the atmosphere.”