U.S. crude futures rallied on Friday amid recovering demand and reports of an impending agreement by the Organization of the Petroleum Exporting Countries and its allies, aka OPEC-plus, to extend May and June output cuts through July. 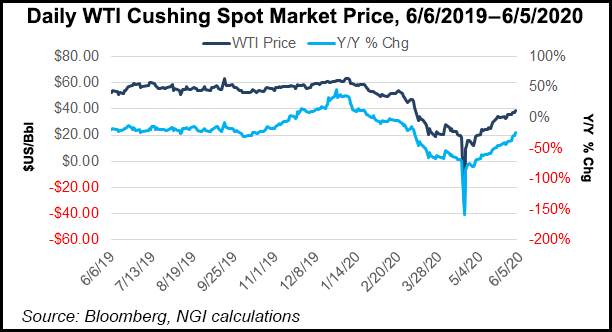 For context, the WTI spot price at the Cushing hub in Oklahoma hasn’t breached $40 since March 6, when OPEC-plus talks to slash output broke down, sparking a price war between Saudi Arabia and Russia that flooded the market with crude at the same time Covid-19 was becoming a global pandemic.

Whether such an agreement would be reached, and the extent to which signatories would comply with the cuts, remained open questions as of Friday.

“The more interesting question for the oil market right now is what happens from August onwards,” Rystad Energy’s Bjornar Tonhaugen, head of oil markets, said Friday, adding that as long as the demand recovery stays intact, the oil market will face a supply deficit starting from August, even if OPEC-plus sticks with the originally planned cuts of 7.7 million b/d.

“That will ensure a fundamental support for prices, while also spurring a quicker reactivation of curtailed U.S. oil production, and eventually frac crews ending their holidays early,” Tonhaugen said. “Indications show that a bit more than 300,000 b/d from shut U.S. production is actually coming back online already from June as a result of the current price levels.”

When it comes to compliance, the biggest questions swirl around OPEC members Iraq and Nigeria, according to analysts.

Tonhaugen said Iraq has struggled to meet its allotted curtailment of 1.061 million b/d, only delivering cuts of around 400,000 b/d during May. However, local authorities have reached agreements with international oil companies (IOC) operating there, “and Iraq has a higher chance of being able to reduce production from the giant IOC-operated fields in the Basrah region than ever before,” he said, noting that Rystad still does not see Iraq meeting its commitments in full.

In a Thursday note to clients, Evercore ISI analysts led by Jonathan Chappell said the most likely outcome of the talks is that “Iraq and Nigeria acknowledge that Saudi is serious, per the March move to punish those not onboard with renewed cuts, and map out a plan to attaining agreed upon production levels, thus enabling the cartel to extend the 9.7 million b/d cut by one month.”

The second most likely outcome, according to Chappell’s team, is that OPEC-plus fails to agree on extending the 9.7 million b/d cuts and maintains the original plan of curtailing 7.7 million b/d of supply from July through December.

History shows, however, that even when OPEC-plus agreements appear imminent, they can be derailed at the 11th hour, as evidenced by the April curtailment talks, when holdout Mexico refused to commit to its allotted 400,000 b/d output cut, eventually acceding to reduce supply by 100,000 b/d for May and June.

Signaling more friction ahead, President Andrés Manuel López Obrador said Friday Mexico would participate in the weekend talks, but that it would not extend production cuts beyond June.

An uptick in prices and a drawdown of crude stocks can’t come soon enough for Lower 48 producers, which have been among the hardest hit by the current supply glut and demand collapse.

In addition to reactivating production, operators “have a stock build that they want to trim as well,” Tonhaugen said. The impending supply deficit will help draw down oil in storage and could “bring back healthier price levels sooner than it was maybe thought.”

For the week ended May 29, U.S. commercial crude inventories fell by 2.1 million bbl from the previous week to 532.3 million bbl, which is still about 12% higher than the five-year average for this time of year, the Energy Information Administration (EIA) said.

Tonhaugen said “even if demand exceeds supply for a while, that does not mean that we really have a problem to source oil. Oil is there, lots of it, waiting to be drawn from storage facilities.”

In its monthly oil market report for May, OPEC said it expects global oil demand to drop by 9.07 million b/d to 90.59 million b/d in 2020 as a result of the pandemic, with the largest year/year contraction occurring in the second quarter. The International Energy Agency, meanwhile, projected a decline of 8.6 million b/d in its May report.