WPX Energy Inc. is cutting its workforce by 8% and moving most of its regional office staff in Denver to the Tulsa headquarters. 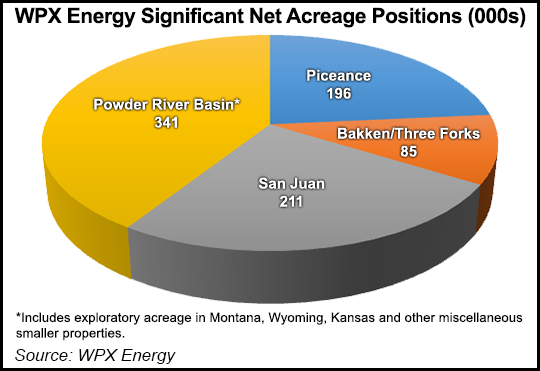 Eighty-three employees are being fired, including 44 in Tulsa, 25 in Denver, 11 in Parachute, CO, two in New Mexico and one in North Dakota. About 120 people in the Denver office were offered jobs in Tulsa.

“These are tough decisions that impact good people, people who have worked hard and done their best for WPX,” CEO Rick Muncrief said. “We do not take that lightly.”

The company’s decisions come in response to the dramatic drop in the price of oil and from no relief in the price of natural gas, its main focus. WPX drills for gas and oil in Colorado, North Dakota and New Mexico, and it operates more than 5,800 wells in the onshore.

“We’ve evaluated many options to adjust our cost structure, and no solution is perfect,” said the CEO. “Decisions are especially difficult when they affect people’s lives.”

Following the reductions, WPX’s staffing to support primary operations stands at 900. It also has employees in Wyoming and in Pennsylvania who are supporting properties targeted for sale. A staff of fewer than 15 people in Denver would be maintained to support legal, environmental compliance, safety and government affairs functions.

To manage costs, WPX also offered a voluntary early exit program in mid-2014 that was accepted by about 100 people. Additionally, WPX, which was spun off from Williams, reduced its general and administrative expenses by 11% year/year in the fourth quarter.

During 4Q2014, oil and natural gas liquids (NGL) sales accounted for half of WPX’s product revenues and 28% of total production volumes. Diversifying the company’s historically gas-weighted production has been part of its long-term, multi-year strategy. Overall production for full-year 2014 was 170,500 boe/d, or 1,023 MMcfe/d. Oil and NGL volumes accounted for 25% of full-year production.

“We executed extremely well last year, delivered on our word and took timely action to start the transformation of the company,” Muncrief said. “We divested noncore operations, sharpened our geographic focus, boosted oil production, increased cash flow, put a new credit facility in place and launched a long-term strategy to expand margins and profitably grow the company…Being successful in this environment means staying proactive and opportunistic.”