WPX Energy Inc. has struck a $775 million agreement to bolt on more West Texas land to increase its Permian Basin portfolio to 120,000-plus net acres. 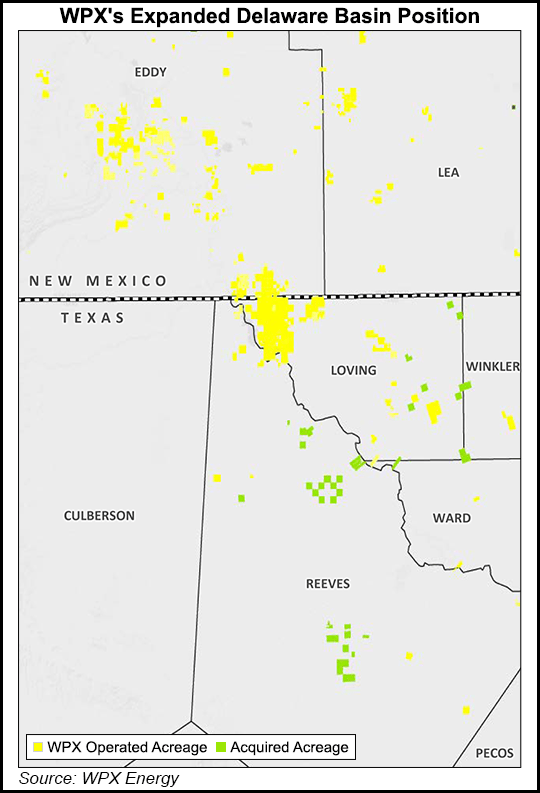 Including the transaction announced Thursday, WPX estimated it has added 32,000 net acres in the Delaware core at an average cost of $28,600/acre, excluding flowing output, since its transformative purchase in mid-2015 of RKI Exploration & Production LLC’s Permian operations.

“In just 18 months, WPX has firmly established itself as a leader in the Delaware Basin,” CEO Rick Muncrief said. “The acquisition leverages our experience to create long-term shareholder value, further builds our inventory of core acreage and accelerates our oil growth with cash on hand and operating cash flow without adding incremental debt.”

The acreage is being acquired from a partnership formed in 2014 by Panther and Carrier that initially was to develop West Texas acreage in Culberson, Reeves and Pecos counties. Panther, formed in 2013, is backed by a Kayne Anderson energy fund, with smaller commitments from Wells Fargo Energy Capital and others. Carrier was formed in 2014 with an equity commitment from Riverstone Holdings LLC.

The purchase is set to be completed in about two months and should accelerate WPX’s deleveraging progress without increasing projected 2017 capital outspend, according to management. Incremental cash flow from the purchase also is expected to fund an existing two-rig program and bring WPX’s total rig count in the Permian to seven.

Projected internal rates of return on the Panther/Carrier wells are 55-95% at current strip pricing, according to WPX. Estimated ultimate recoveries are 1.0 million boe for the Delaware’s Wolfcamp A formation using X/Y one-mile laterals. WPX said the bolt-on would increase total gross drillable locations to 6,400 from 5,500.

BMO Capital Markets analyst Phillip Jungwirth said Friday the price per acre paid by WPX, estimated at $28,000, is at the midpoint for similar Delaware sub-basin acquisitions announced during the second half of 2016 (2H16).

WPX is funding the purchase through an equity offering and cash on hand. It has raised $600.8 million by issuing 45 million shares, with underwriters given a 30-day option to purchase another 6.675 million.

Given WPX holdings also in the Bakken, and its operations within the Gallup formation of the San Juan, the deal appears to be solid, analysts said.

“We estimate WPX trades at $42,000/Delaware acre (after valuing Bakken, Gallup), resulting in the deal being accretive, but [we] don’t view the company as being in need of additional inventory,” Jungwirth said. “Even with the dilution though, we like the transaction.”