Port Dolphin LLC has asked FERC for more time to complete a pipeline for its proposed liquefied natural gas (LNG) terminal off the Florida coast in the Gulf of Mexico while it looks for a power generation demand silver lining in the shale gas cloud that has rained on the import project. 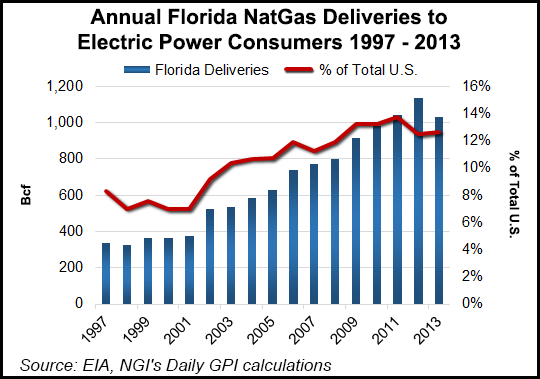 The Commission in 2009 authorized construction of the onshore portion of a pipeline to take regasified LNG from the port proposed to be sited 28 miles offshore Tampa Bay (see Daily GPI, Dec. 7, 2009). Other project-related permits/approvals followed (see Daily GPI, Feb. 1, 2011; March 22, 2010). What also followed was a surfeit of shale gas and the nation’s economic downturn.

“…[D]uring the time period since the issuance of the [U.S. Maritime Administration (MARAD) deepwater port (DWP) license] and the FERC certificate, the U.S. and Florida experienced an economic recession that the nation and state are now emerging from. This dramatic, unforeseen economic downturn significantly and adversely affected the commercial attractiveness of many major new ventures, including the Port Dolphin DWP project.”

Rather than turn its LNG import project around to export liquefied U.S. gas — as other would-be import terminal developers/operators have done — Port Dolphin, which is a unit of Norway’s Hoegh LNG AS, still wants to make a go of importing LNG. It told FERC the project could even regasify domestically sourced LNG from the Gulf of Mexico, for instance.

It would be less expensive to regasify U.S. LNG sourced from the Gulf of Mexico than to construct a new natural gas pipeline from northern Florida to serve southern portions of the state, Port Dolphin told FERC, apparently with the proposed Florida Southeast Connection in mind. “Port Dolphin also adds a significant storage facility, in addition to invaluable supply flexibility that can be of great benefit to Florida consumers in the future,” the company said.

A Hoegh LNG representative was not immediately available to discuss the economics of the proposed project and “importing” domestically sourced LNG.

Port Dolphin is asking FERC to allow it to take until Dec. 31, 2018 to complete the previously authorized pipeline construction. The date corresponds to the deadline in the project’s DWP license from MARAD, Port Dolphin said.

“…[T]he project still has substantial commercial potential together with a unique ability to meet the natural gas needs of Florida. For these reasons, Port Dolphin needs additional time to market its modified business plan, to align upstream and downstream participants, and to construct the authorized facilities,” Port Dolphin said.

“When built, Port Dolphin will be positioned to receive LNG from any source, both from U.S. producers (where gas is priced better than gas from foreign suppliers) or from any other world market in the future (if the gas pricing situation reverses again). Given the present market, in which U.S. terminals are set to become bi-directional, Port Dolphin has found that U.S.-produced LNG can have a significant role in supplying underserved markets in the U.S. before serving overseas markets.”