The global oil and natural gas industry will turn cash flow positive in 2017 for the first time since the downturn if the reduction in output promised by the Organization of the Petroleum Exporting Countries drives oil prices above $55/bbl, according to Wood Mackenzie. 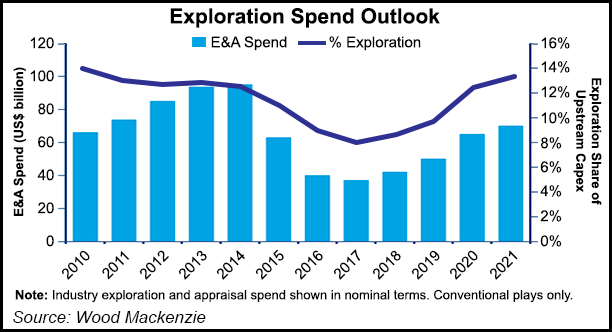 The consulting firm on Monday published “Corporate Themes: Five Things to Look for In 2017,” which assesses next year’s prospects for the oil majors, independents and national oil companies (NOC).

“Most oil and gas companies will start 2017 on a firmer footing, having halved cash flow breakevens to survive the past two years,” said Tom Ellacott, senior vice president of corporate analysis research. “Further evidence of a cautious, U-shaped recovery in investment should emerge.”

Five themes are on the horizon for 2017:

“Overall, 2017 will be a year of stability and opportunity for oil and gas companies in positions of financial strength,” Ellacott said. “More players will look at opportunities to adapt and grow their portfolios.”

Improving the bottom line will remain at the top of the list, researchers said. Capital discipline, cost reduction and deleveraging “will frame corporate strategies in 2017. But 2016 will prove to be the low point in the investment cycle, with confidence boosted by OPEC’s decision to cut production.”

U.S. independents are expected to be the first responders to rising commodity prices.

The U.S. onshore operators could increase capital spend by 25% or more if oil prices average above $50/bbl, according to Wood Mackenzie. However, spending by the “bigger players” still may trend lower. Total investment by the majors may fall by around 8% as recent capital-intensive projects wind down. For example, Chevron Corp. is moving more of its low-cost activity to the Permian Basin as its expensive liquefied natural gas projects overseas are completed.

“More companies will strive to adapt by positioning portfolios lower down the cost curve,” Ellacott said. “The hot oil plays are U.S. tight oil, with the Permian Basin to the fore, and Brazil pre-salt. Both have materiality and development breakevens, which are among the lowest globally. Renewables exposure will continue to build, though scarce capital and improving returns from upstream suggest small steps in 2017 rather than transformational moves.”

Wood Mackenzie is forecasting production from the 60 companies covered in its corporate service to grow by an average of 2%, “which is impressive given development spend was slashed by over 40% between 2014 and 2016,” it said.

Researchers expect the trend of improving exploration success rates and full-cycle returns to continue in 2017, with more majors and NOCs stepping up new ventures activity.

“Mergers and acquisitions will also offer an attractive value proposition for the financially strong prepared to take a bullish view on long-term prices,” Ellacott said. “Low-cost, low-risk discovered resource opportunities will look attractive again. And the larger players will need these to ensure long-term portfolio renewal as part of a more balanced growth strategy.”