Fort Worth-based Athlon Energy Inc., which is focused on the Wolfberry play in the Permian Basin, has filed for an initial public offering (IPO) expected to be worth $345 million. 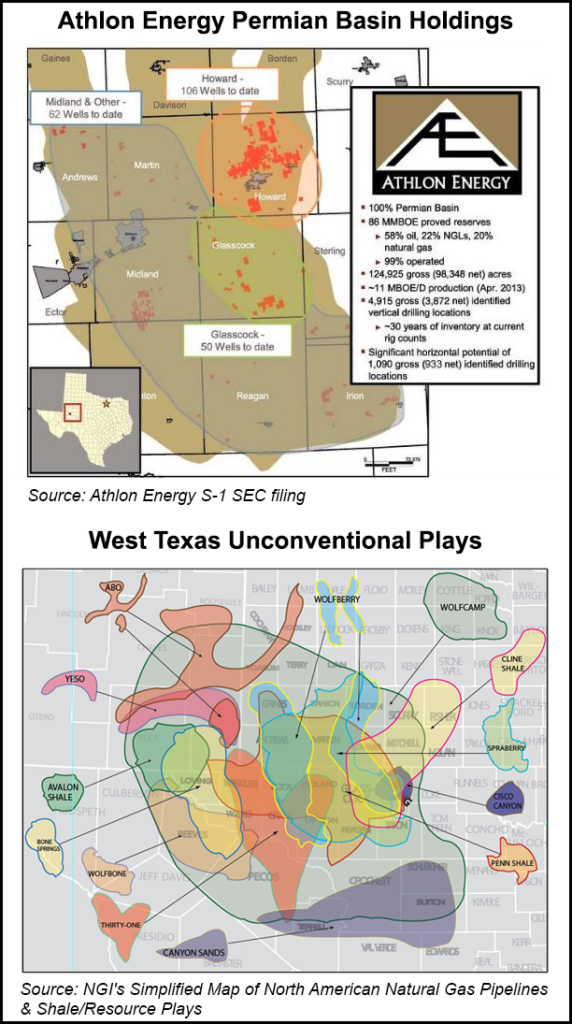 “All of our properties are located in the Midland Basin [a Permian sub-basin],” the company said in a filing with the U.S. Securities and Exchange Commission. “Our drilling activity is currently focused on the low-risk vertical development of stacked pay zones, including the Spraberry, Wolfcamp, Cline, Strawn, Atoka and Mississippian formations, which we refer to collectively as the Wolfberry play.”

Athlon was founded in August 2010 by a group of former executives from Encore Acquisition Co. following its acquisition by Denbury Resources Inc. With an average of approximately 19 years of industry experience and 10 years of history working together, the founders have “a proven track record of working as a team to acquire, develop and exploit oil and natural gas reserves in the Permian Basin as well as other resource plays in North America,” the company said.

As of May 31 Athlon had an acreage position of 124,925 gross (98,348 net) acres in three primary areas based on geographic location within the Midland Basin: Howard, Midland and Other, and Glasscock.

At the end of last year Athlon had 86 million boe of proved reserves, 58% oil, 22% natural gas liquids and 20% natural gas. About 30% were proved developed.

Athlon intends to trade on the New York Stock Exchange under the ticker “ATHL.”