The first foreign operators to win acreage in Mexico’s deepwater oil and natural gas regions are gearing up to start drilling, even as various political uncertainties cloud the outlook for the local energy sector. 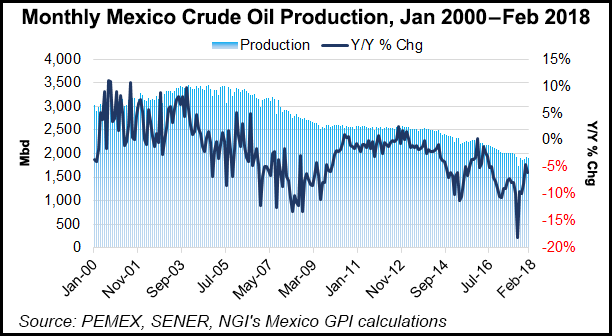 The Mexican upstream regulator on Tuesday approved an exploration plan submitted by China National Offshore Oil Corp. for a deepwater area in the Gulf of Mexico (GOM). The block was one of several awarded in December 2016 at Round 1.4, Mexico’s first auction of deepwater acreage.

To date, the Comision Nacional de Hidrocarburos (CNH) has authorized plans for six of the eight contracts signed in Round 1.4. The first well from those contracts is expected to start drilling later this year, while several others are scheduled to begin in 2019.

Based on the plans approved thus far, operators in Mexico’s deepwaters are seemingly unperturbed by ongoing political uncertainties over the future of the country’s energy reforms, as well as the fate of the North American Free Trade Agreement (NAFTA).

“What we are seeing, actually, is that companies will start drilling sooner than initially expected,” Pulso Energetico director Pablo Zarate told NGI’s Mexico GPI. He heads a think tank that is supported by Amexhi, a private-sector trade association of Mexico’s oil and gas companies.

“Deepwater drilling could start as early as 4Q2018, meaning that some consortiums are taking a bit less than two years to get from the contract signing to spudding the first well,” Zarate said. “Two years ago, expectations were that it would take around three to four years.”

Andres Manuel Lopez Obrador, the left-leaning candidate who leads the polls for Mexico’s July 1 presidential election, is a vocal critic of the energy reforms. If elected, he has said he would review all exploration and production (E&P) contracts awarded by the current administration of Enrique PeÃ±a Nieto. Meanwhile, the ongoing NAFTA negotiations are threatening to do away with certain investor protections built in to the treaty.

Neither of these uncertainties should sit well with operators of deepwater projects, which require long-term commitments and substantial investments.

Nonetheless, “we are definitely not seeing a slowdown in terms of exploration activity,” Zarate said. “Of course, this does not mean that politics can’t get in the way, slowing down other processes in the reform. But the level of activity that we are seeing makes the case, on its own, for why Mexico needs continuity in its energy policy.”

The first well of the Round 1.4 deepwater contracts is penned in for 4Q2018. The well is to be drilled in Area 1, operated by France’s Total SA in a 50/50 partnership with ExxonMobil Corp.

CNH in March approved the operator’s exploration plans, which include a commitment to drill at least two exploration wells. Area 2 is located in the GOM’s Perdido Fold Belt.

According to the plans approved by the regulator, CNOOC intends to drill first in Area 1 at the beginning of 2019 and then move to Area 4 in the second quarter.

“It would seem that there will have to be some sort of logistical coordination,” CNH commission Nestor Martinez Romero said during a webcast of the Tuesday meeting. “What we’re seeing here is that the [Area 4] well has to be drilled in April 2019 because the operator will probably have the drilling rig at the other contractual area” before then.

CNOOC’s plans for Area 1 also include a second exploration well that it would spud in 2021. The Chinese firm is the sole operator of both blocks.

The other deepwater exploration plans include two blocks won by a three-way consortium of Statoil ASA, BP plc and Total. CNH authorized the plans for the two blocks in March, both of which are located in the pre-salt Salina region.

The partners plan to spud their first well, in Area 3, operated by Statoil, during the fourth quarter of next year. A second exploration well, targeting the Serrano prospect of Area 1, operated by BP, is scheduled for 3Q2020.

In early March, CNH also approved the exploration plans for Area 3, operated by Chevron Corp. The area is located in another frontier region of the Perdido Fold with very little previous exploration work.

Chevron’s contract does not include any drilling commitments. The company won the block in partnership with Mexican state oil company Petroleos Mexicanos (Pemex) and Japan’s Inpex Corp.

Mexican regulators are still reviewing exploration plans for two other blocks in the Salina Basin. A consortium headed by a subsidiary of Malaysia’s Petronas holds one of them, while a group led by Murphy Oil Corp. has the other.

CNH expects to review and authorize plans for both blocks in the coming weeks, a spokesperson for the regulator told NGI’s Mexico GPI.

Earlier this year, Mexico awarded an additional 19 contracts for deepwater acreage at Round 2.4. Bidding was much more competitive the second time around, with winners committing to drill a combined 23 exploration wells and offering $525 million in cash bonus payments.