Wisconsin’s economy is back to pre-2008 recession levels, new natural gas connections are up by 8.5%, and electric hookups have risen more than 3%, offering Wisconsin Energy (WE) some optimism for more growth going forward, CEO Gale Klappa said Tuesday. 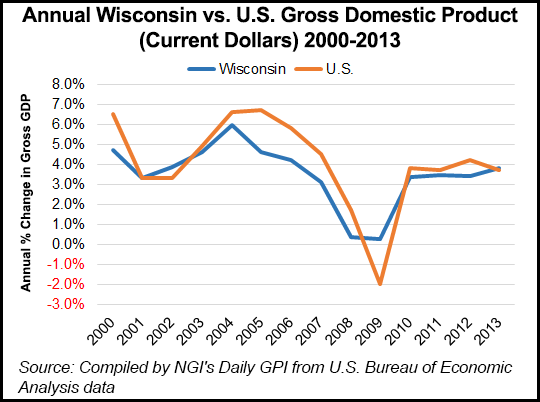 During a conference call to discuss 2Q2014 results, Klappa said the increased utility hookups in general were indicative of a stronger economy, and in the case of gas connections, they are reflecting a surge in customers switching from propane to natural gas in WE’s utility service areas.

The new entity would serve more than 4 million customers in Illinois, Michigan, Minnesota and Wisconsin.

The acquisition, said Klappa, would be accretive to earnings/share in the first full calendar year after the deal closes; largely credit neutral; and the long-term growth rate for the new entity would at least equal WE’s current projected growth rate.

“Importantly, more than 99% of the new company’s earnings will come from regulated businesses,” he said. The acquisition should be completed with shareholder, state and federal regulatory approvals by the second half of next year. Filings to the four state regulatory commissions involved are to be made the first week of August, and all the federal applications by the end of August.

Klappa said the Wisconsin Public Service Commission has given the green light to build and operate a $175-180 million, 85-mile natural gas pipeline lateral in west-central Wisconsin to address reliability needs in the area and meet “growing demands.” Demand growth is mostly coming from the propane-to-natural gas switching.

On the electric side, WE is continuing to convert its downtown Milwaukee-based cogeneration facility, Valley Power Plant, from coal to natural gas. The facility produces electricity for the grid, steam for nearly 400 downtown customers and voltage support for the electric utility network.

“The facility will be fully converted from coal to natural gas by the end of the year at a projected cost of $65-70 million,” Klappa said.