Natural gas and natural gas liquids (NGL) may get more attention in the Williston Basin in future years as commodity prices turn upward and producers continue their pursuit of wringing more value-added returns out of the Bakken Shale in North Dakota, stakeholders said this week. 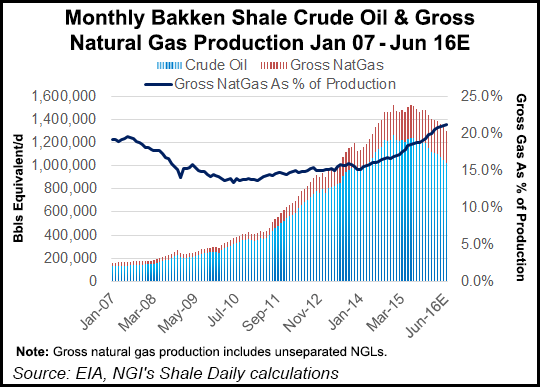 “You really can’t take your eye off the ball for a minute because [even during the prolonged downturn in prices] things are still evolving very quickly here,” he said. “You have to stay focused on the little things happening in the play. Every month, week and day things continue to evolve, so I try to stay focused on rig locations, completion activity, timing, well performance, and all the small details that over time add to a better understanding of the play to make decisions and forecasts going forward.”

One of those “ah-ha” moments for Kringstad is the increased importance of the Bakken in the future for gas and NGLs, which was reinforced by other industry and state officials before and during the three-day WBPC. As prices recover, he anticipates increased interest in adding intrastate gathering infrastructure, such as more interconnections within the system to allow more barrels of crude to move within North Dakota.

“My forecasts show significant growth longer term on the natural gas infrastructure side, and with that will be the need for additional processing and transportation,” Kringstad told a WBPC audience on Tuesday. “The bottom line is that going forward we’re going to need additional NGL capacity as our gas volumes continue to grow. Currently, today’s infrastructure would not be able to meet the long-term needs of the industry, and the build-out of NGL infrastructure is much more complex than adding it on the oil side.”

The challenge for individual operators as prices move higher would be be where they best allocate limited resources.

“That’s one of the things that the state is struggling with, trying to determine where and how to help operators ramp up operations again in places where there is minimal activity now,” Ness said.

Ness told reporters separately that rebuilding the oilfield service sector is part of “putting a lot of pieces back together, but when we do I think we are going to have better infrastructure to make this [Bakken] play better going forward with a better bottom line, and more barrels at lower risk and cost.”

An impediment to increasing production is what Ness called “a myriad of regulations and costs,” mostly federal, for producers. He cited the Obama administration’s methane emissions restrictions, which he said were “extremely punitive” with a mandate to cut to zero these emissions rather than an earlier goal of reducing them on a steady basis. In response to a question from NGI’s Shale Daily, Ness said the NDPC’s primary focus, along with many of its members, is fighting regulations considered onerous, unnecessary and uneconomic.

North Dakota’s chief oil/gas regulator Lynn Helms reminded the audience that the Bakken resource is still “enormous,” with only 20% developed to date, and with slightly higher prices a lot of shut-in production becomes economic again. Overall state production today has held at the 1.1 million b/d level.

“Some of the things we have seen develop in the past two years, such as rig efficiencies and much bigger hydraulic fracturing [fracking] jobs, less trucks and more pipes, will become permanent,” Helms said.

“The key is how we in North Dakota add value to our commodity — here, instead of exporting it,” Helms said. In addition to more in-state refining capacity, he called for “more intense focus on what to do with the state’s natural gas, such as fertilizer and petrochemical production in the state.”

North Dakota is considered a natural candidate for developing downstream opportunities in the chemicals industry because of the plentiful NGL resources in the basin (see Shale Daily, May 27, 2014).

Noting that many state officials are taking a steps to add value to the state’s oil/gas resources, Ness said “value-added” means creating more of a local market for the state’s goods, and in that respect he sees the creation of that in oil/gas as the “next economy for North Dakota.”

However, he cautioned that it will take awhile to develop because even when crude prices get back above $60/bbl he thinks it will be a 12- to 24-month period for the industry to ramp back up to full speed.