Williams, which operates more than 30,000 miles of pipelines across the Lower 48 and into the deepwater Gulf of Mexico (GOM), struck an upbeat tone on the future of U.S. natural gas and the company’s potential in the year ahead. 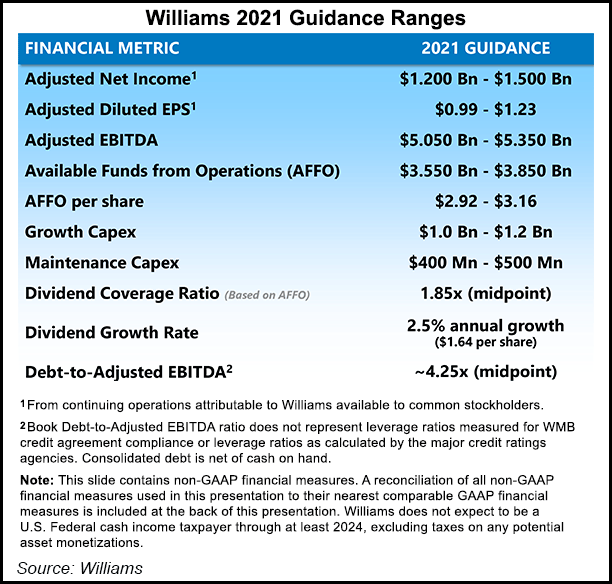 The Tulsa-based company’s executives said demand for natural gas continues to mount, with 2020 gathering volumes up 7% in the Northeast alone and continued momentum expected this year. The company also continues to expand its Transcontinental Gas Pipe Line LLC, aka Transco.

Among other projects, Williams this month won Federal Energy Regulatory Commission approval to move forward with its Leidy South expansion in Pennsylvania, which is designed to carry about 600 MMcf/d of natural gas capacity to Atlantic Seaboard markets. The project is now under construction.

“The Northeast is obviously a huge part of our growth,” CFO John Chandler said during the 4Q2020 earnings call on Tuesday.

Overall, natural gas gathering volumes increased 3% in 2020, excluding Blue Racer Midstream, which the company began operating as a 50% owner in the fourth quarter.

In addition to Leidy South, Williams recently ramped up Southeastern Trail, which serves the Mid-Atlantic and Southeast. It started in-service with 150 MMcf/d in November and an additional 80 MMcf/d in December, and the remainder of the 296 MMcf/d project is expected to come online in the current quarter.

More broadly, Williams executives said they see headwinds receding this year, assuming the impacts of the coronavirus pandemic continue to ease, economic recovery gathers momentum and energy demand builds. They also noted that, if history is an indicator, the exceptional hurricane season of 2020 that interrupted both production and demand multiple times is unlikely to repeat in 2021, clearing a path for a smoother year ahead.

With the combination of fewer storms and virus interruptions, “We expect a nice recovery in our Gulf of Mexico” business this year, CEO Alan Armstrong said during the earnings call.

Longer term, Armstrong was particularly enthusiastic about his outlook for natural gas, saying it will play a vital role in meeting energy needs for decades, even as the United States and a host of other leading countries endeavor to shift to a carbon-neutral economy by 2050.

“We remain bullish on natural gas because we recognize the critical role it plays and will continue to play in both our country’s and the world’s pursuit of a clean energy future,” Armstrong said, referencing its relatively light impact on the environment when compared to coal and other fossil fuels. “Natural gas is an important component of today’s fuel mix and should be prioritized as one of the most important tools to aggressively displace more carbon.”

The midstream company has set a goal to reduce its emissions by 2030, and it is targeting 2050 to reach net zero.

“We will leverage our natural gas focus strategy and today’s technologies to focus on immediate opportunities to reduce emissions in and around our business,” Armstrong said. “We also are looking forward to an anticipated future of innovations and technologies that we can use on our key energy networks to deliver on the next phase of energy transition.”

However, “last week’s weather demonstrated the importance of a comprehensive energy strategy for the U.S., one that doesn’t demonize one energy source over the other…because of labels imposed by the environmental opposition,” Armstrong added.

“There are important and complex decisions that need to be balanced to address the things that we all want from our energy sources — reliability, affordability and balancing the issues of carbon intensity. And when we think about carbon intensity, we really have to consider that from a global perspective,” he said. “We believe that when all these factors are accurately weighed and balanced, natural gas will be a very critical part of the energy mix for many more decades to come.”

Williams’ fourth quarter capital expenditures (capex) totaled $301 million, down from $404 million a year earlier, continuing a trend across all of 2020.

At the close of the fourth quarter, Williams had cash and cash equivalents of $142 million and long-term debt of $21.5 billion.