A consortium of Canadian natural gas producers is teaming up with the Nisga’a Nation and Houston-based liquefied natural gas (LNG) developer Western LNG LLC on plans for another export project in British Columbia (BC). 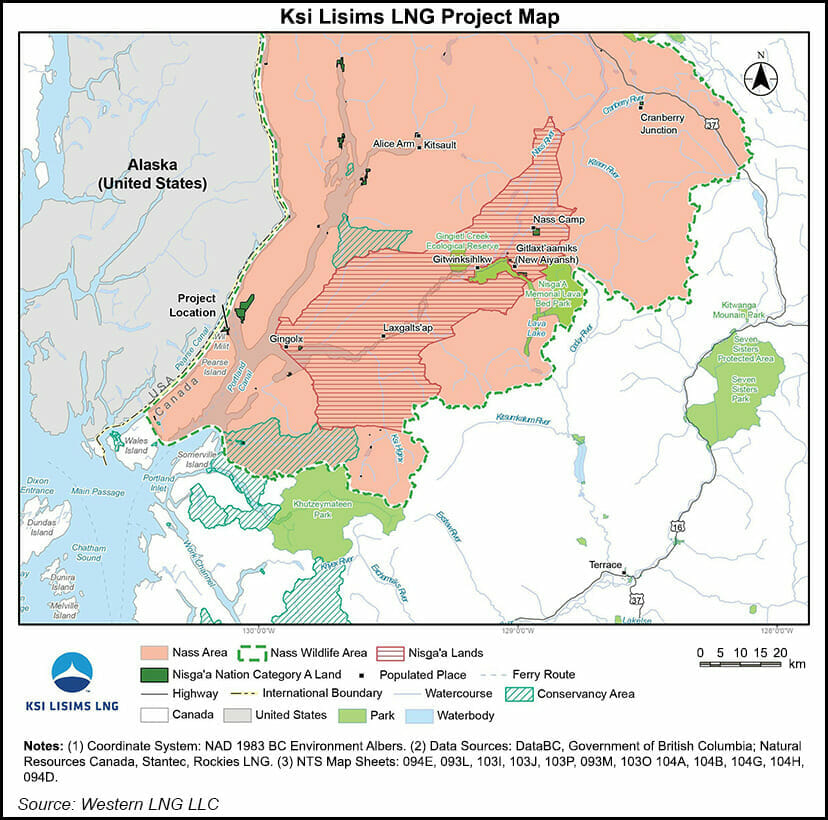 The consortium known as Rockies LNG Partners, along with the other proponents, announced Monday the initial project description for the Ksi Lisims LNG terminal had been filed with both the provincial and the federal governments. The filing kicks off the engagement process for the proposed facility.

The plan envisages a 12 million metric ton per year (mmty) floating LNG project on Nisga’a territory. The site would be at Wil Milit on the northern tip of Pearse Island on the Portland Canal, near the Alaska border. The Nass valley site lies west of Gingolx, BC. A final investment decision is being targeted for 2024, with commercial operations expected to begin in late 2027 or 2028.

The facility would receive about 1.7-2.0 Bcf/d, and two pipeline projects to supply the project are currently being evaluated. Both proposals have already received regulatory approvals and would connect feed gas resources in northeastern BC to the project site, the partners said. The selected natural gas pipeline would be owned and operated by a third party.

According to the initial project description, the contest is between Enbridge Inc.’s Westcoast Connector Gas Transmission project and TC Energy’s Prince Rupert Gas Transmission project. Both projects were initially designed to carry feed gas to BC LNG terminals, but were placed on hold after the export plans were scuttled. The environmental approvals for both proposed pipelines are set to expire in 2024, according to the filing.

The news comes as the prospects for exports from the BC coast are a bit murky. A spate of projects, buoyed by shorter shipping times to Asia and BC’s “green” credentials, has been proposed. However, the Royal Dutch Shell plc-led LNG Canada development is the only one to reach FID.

The BC LNG industry was struck a blow in May when Kitimat LNG sponsor Woodside said it would join partner Chevron Corp. in exiting the project. But there have also been green shoots in the sector too. Those include customers buying LNG cargoes linked to Western Canadian gas prices and Pembina Pipeline Ltd. joining the Haisla Nation as a partner on Cedar LNG.

The project proponents are also aiming to make Ksi Lisims LNG one of the world’s lowest-emissions plants, with net-zero goals in their sights. The plant would be powered with hydroelectricity and rely on “strong monitoring and measurement,” according to the partners. The project’s low-carbon strategy also includes energy efficiency, the purchase of carbon offsets and the potential for carbon capture and storage.

“This project will be important to the global LNG industry as it navigates the energy transition,” Western LNG CEO Davis Thames said. “Fueled by clean British Columbia hydropower and supplied by low-carbon Canadian natural gas, Ksi Lisims LNG will achieve one of the world’s lowest unit carbon emissions rates for a large-scale LNG export project, making net zero both feasible and achievable.”

The developers also said the project, if completed, would generate “significant” benefits, including jobs, training and public revenues, to First Nations and other communities in BC. The partners $55 billion in direct and indirect economic impact from the development of the LNG facility, infrastructure and upstream activities. The liquefaction facility alone could have a price tag of $10 billion, the Canadian Broadcasting Corporation reported.

The project proposal follows efforts by the Nisga’a Nation to locate a major LNG export facility on its treaty lands since 2014.

“Attracting an economic base to the Nass Valley has long been a priority for the Nisga’a Nation. This is why, for close to a decade, our Nation has worked to attract a world-leading LNG project to our treaty lands, and why we are proud to commence the formal regulatory process for our project, Ksi Lisims LNG,” Nisga’a Nation President Eva Clayton said.

The partners said they had already begun early engagement activities with a number of First Nations, government and regulatory officials, and community leaders. The engagement involved introducing the project and soliciting comments on early drafts of the initial project description, “many of which have been incorporated into the recent filing,” the partners said.

“Now that restrictions related to Covid-19 are being thoughtfully reduced, Ksi Lisims LNG anticipates it will have more opportunities to engage and consult with a broader range of stakeholders in a safe and respectful manner, subject to appropriate accommodation of their needs.”