The West Virginia Oil and Natural Gas Safety Commission, formed by Gov. Earl Ray Tomblin in July in response to oilfield accidents, said it plans to extend its work through this year to track possible implementation of 17 recommendations issued last month. 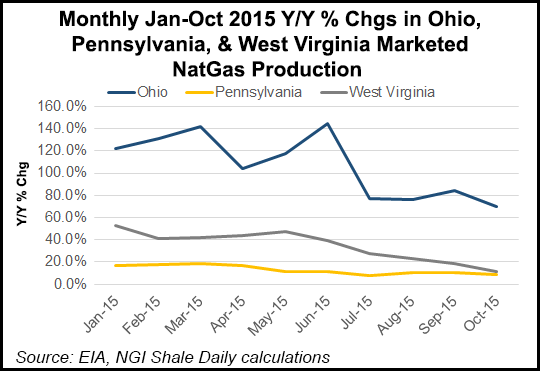 A final report was due to the governor in November, but Tomblin spokesman Christopher Stadelman said the administration has not yet received a copy. Following an increase in oilfield accidents in the state since 2008 when horizontal drilling began, Tomblin formed the 18-member commission to enhance workplace safety in the industry (see Shale Daily, Aug. 19, 2015; July 9, 2015). At the time the commission was announced, the administration said its work could result in legislation.

Stadelman said Wednesday the administration isn’t ready to talk about its intentions for the commission’s work, noting the state’s 2016 legislative session kicked-off on Wednesday. He maintained that legislation could be a possibility.

While the recommendations focused heavily on increasing natural gas gathering line safety and roadway safety for industry transportation activities, it recommended the governor “give consideration to legislation” to encourage the state’s oil and gas industry to conduct ongoing internal safety reviews. A primary deterrent to such reviews, the commission noted in its proposal, is the fact that they could be used against a company in litigation.

“Creating a self-critical analysis privilege, like the privilege that exists presently under West Virginia law for health care peer review, would reduce these concerns and incentivize the industry to monitor its safety efforts and conduct detailed investigations regarding any safety-related incidents, which will promote worker health and compliance with statutory and regulatory requirements,” said the recommendations, which were included in the minutes from the commission’s November meeting.

The group also proposed that natural gas and hazardous liquids pipelines be part of the 811 “Call Before You Dig” system and that gathering lines be subject to additional requirements. It also proposed establishing a database to track accidents at drilling and pipeline sites. Appropriate state agencies should also consider conducting an evaluation of an online pipeline mapping system with limited access and strong security for first responders, the recommendations said.

Among other proposals, the commission said a central list of oil and natural gas safety training courses should be developed and a “collection point” for industry-related traffic accidents be developed by the West Virginia Department of Transportation.

“We don’t necessarily have a problem with the intent, or what went on in the commission,” said West Virginia Oil and Natural Gas Association (WVONGA) Executive Director Corky DeMarco.

DeMarco told NGI’s Shale Daily that WVONGA provided the commission with a chronology of the safety initiatives his organization and members have undertaken since about 2003. That includes an agreement that was signed by WVONGA with the U.S. Occupational Safety and Health Administration in 2007. While the agreement has expired, DeMarco said, it helped established a strong framework in the state to raise safety awareness in the industry.

“I don’t know of anything that has come out of the commission that would hurt the industry,” he added. “I think there were some accidents over time that people had reached out to the governor about and said ‘you all should take a better look at this.’ When we gave the [commission] that chronology to show what we have been doing, I think they were surprised.”

The commission plans to meet in June and again in December to receive status reports.