“I was disappointed with the decision” handed down by the U.S. Court of Appeals for the District of Columbia Circuit in mid-March, he told reporters during a briefing Wednesday at Federal Energy Regulatory Commission (FERC) headquarters in Washington, DC.

‘We’re not going to appeal [the case] to the Supreme Court,” because it would be a lengthy process and the issues involved are “fairly narrow” — the futures and the natural gas market, he said.

While former gas trader Brian Hunter challenged FERC every step of the way on the $30 million penalty, Wellinghoff was confident that the agency wouldn’t face similar court battles involving fines that it has imposed on power traders. “I don’t expect any fights because [we’ve] settled every single case,” except Barclay’s, he said. “I don’t see anybody succeeding” in a challenge to the Commission.

Wellinghoff said he hasn’t decided if he will seek a second term as chairman. His five-year term expires on June 30. “Ultimately [it] will be up to the White House,” which hasn’t signaled its wishes.

The chairman signaled his support for legislation that Rep. Mike Pompeo (R-KS) is drafting that would speed up pipeline permitting.

Sequestration also has not had a significant impact on the agency yet, according to Wellinghoff. “I think it will not be until 2014 [that] it will affect us,” he told reporters.

As for cyber security threats, the risks to generation and gas pipeline infrastructure are increasing, he said. At the same time, there seem to be more vendors coming out with solutions to help the energy industry combat the cyber threats, Wellinghoff said. 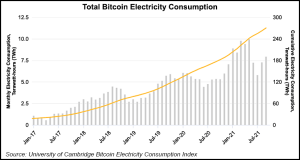