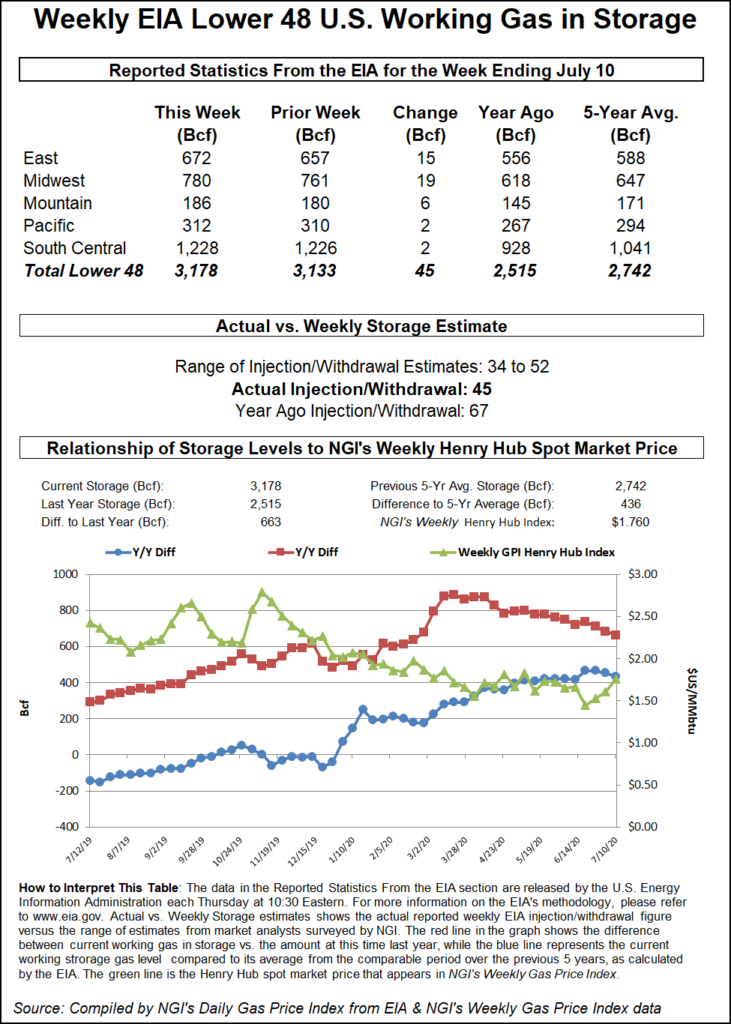 While the heat outlook eased to start the week, losses were minimal as the week wore on with forecasters continuing to call for scorching summer temperatures, overall, through the end of July and into early August, fueling strong national cooling demand and setting up this month to be one of the hottest Julys on record in terms of gas-weighted degree days, Bespoke Weather Services said.

“Prices declined this week, thanks to some weakening in the level of heat in the forecast,” the firm said. However, “it is worth pointing out that even with the cooler forecast changes, we remain on pace to rival July 2011 for the hottest July on record,” as measured by national gas-weighted cooling degree days, “thanks to persistence and areal coverage of heat more than extremes in any one given region.”

As the trading week closed out, price declines were widespread but mostly modest.

August natural gas futures started the week in the red, falling Monday on cooler forecasts over the prior weekend. But they recovered the following two days, with the mid-range outlook for heat holding strong.

But futures turned negative again Thursday and finished the week on a sour note on Friday, as worries about coronavirus challenges, a continued slump in liquefied natural gas (LNG) exports, and rising production permeated markets and thwarted bulls.

The U.S. Energy Information Administration (EIA) reported an injection of 45 Bcf for the week ending July 10, the third straight week of double-digit injections and another indicator that stronger energy needs are tightening gas supply/demand after months of imbalance caused by the pandemic. The result was slightly lower than the averages of major polls.

But the virus ultimately weighed on sentiment, as case counts climbed across the Lower 48 and in important export destinations, raising fresh concerns about demand once the summer heat fades and casting a spotlight on containment issues in the fall.

The August Nymex contract on Friday fell a half-cent day/day and settled at $1.718/MMBtu.

Export and storage challenges are ingrained in the pandemic. Virus outbreaks have hampered economic activity and, by extension, commercial and industrial energy demand domestically and abroad. With demand relatively light in Europe and Asia, the critical export destinations prior to the pandemic, LNG feed gas levels remain anemic at a time when a rebound is needed to prop up demand in the fall.

“Although the EIA print was modestly constructive, once it was out of the way the bears took over,” analysts at Tudor, Pickering, Holt & Co. (TPH) said. The 45 Bcf build “confirmed our bearish near-term stance as it implies a roughly 1.5 Bcf/d oversupplied market on a weather-adjusted basis.”

Looking ahead to the next EIA storage report, the TPH analysts are looking for 40 Bcf injection, “which would be slightly above seasonal norms of 34 Bcf, despite strong weather. And that’s the rub:  without strong weather demand, inventories likely continue to expand versus the five-year and set up for a capacity crunch this fall, which drives a downward skewed risk-return profile for the balance of injection season.”

In fact, most analysts agree that, in order to ward off containment threats tied to a pandemic that has produced record daily case counts multiple times in recent weeks, searing summer heat will have to hold for the balance of summer.

“The containment concerns will not go away anytime soon,” Bespoke said, but strong summer heat continues to materialize in forecasts, supporting expectations for ongoing and substantial cooling demand. “Nothing has changed to sway us away from our bullish view.”

Cash prices advanced a half-cent to close the week on Friday.

“Strong heat with highs of upper 90s to 110 continues from California to Texas, while hot and humid with highs of mid-90s over the South and Southeast for strong demand,” NatGasWeather said. “Hot high pressure will expand to include the Great Lakes and Northeast” for several days with highs of 90s stretching from Chicago to New York City, while also heating up across the Northwest with upper 80s and 90s to aid national demand.

The only cooler exceptions are across the Northern Plains and New England, the forecaster said, as weather systems lead to highs of 70s to 80s. However, hot upper high pressure is expected to “rule much of the United State July 21-30 with widespread upper 80s to 100s. A hot versus normal pattern is expected into the start of August with widespread heat and humidity for strong national demand.”

Concerns earlier in the week about supply in the regions on Texas Eastern Transmission (Tetco) eased. Tetco on Monday gave notice that capacities would be reduced on its 30-inch diameter line over most of the remainder of July.

Declines on Friday were most pronounced in California, where SoCal Citygate lost 10.0 cents to $1.845

In pipeline news, Williams said on Friday that it received approval from the Federal Energy Regulatory Commission to move forward with its Leidy South project, which the Tulsa, OK-based company expects would create 582,400 Dth/d of additional pipeline capacity and enable more power plants to convert from coal to natural gas.

The project is to connect supplies of natural gas produced by Cabot Oil & Gas Corp. and Seneca Resources Co. LLC in the Marcellus and Utica regions of Pennsylvania with demand markets along the Atlantic Seaboard by the 2021-2022 winter heating season.