Weekly cash prices rebounded from the nosedive of a week earlier, lifted by a round of winter weather in the Northern Plains that gradually pushed eastward and galvanized heating demand over swaths of the Lower 48. 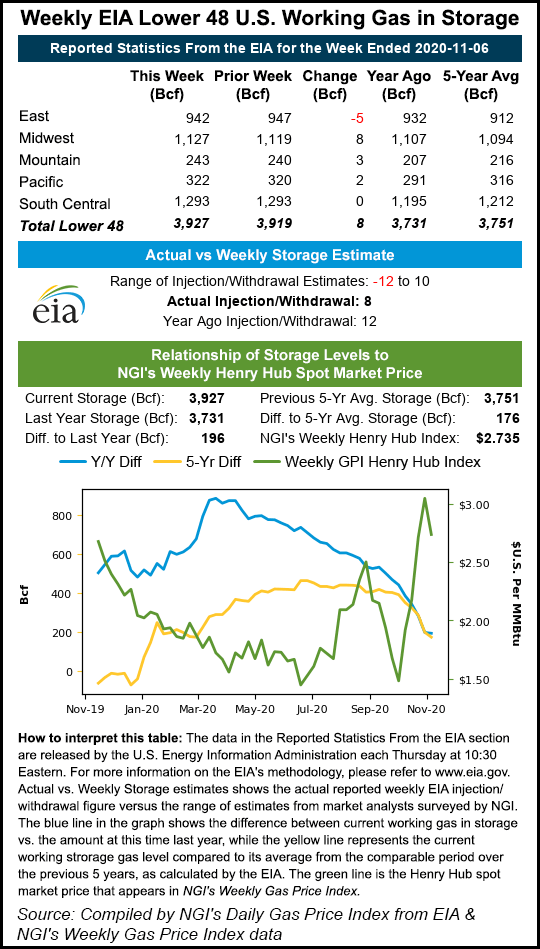 NGI’s Weekly Spot Gas National Avg. for the Nov. 9-13 period climbed 12.5 cents to $2.510. The week before, when mild temperatures blanketed the country and sapped demand, weekly prices dropped 61.5 cents on average. For all the potential drivers of gas prices, the see-saw action so far in November amplified the outsized significance of weather as much of the country steadily moves into winter.

Forecasters said volatility may continue to pervade cash markets the rest of this month, as weather outlooks hover between cold and mild over big sections of the country, and overall production, while still low compared to a year earlier, has mostly held steady this month.

Bespoke Weather Services said chilly conditions are expected to hang around the Midwest and into parts of the East beyond mid-month, but the potential for comfortable temperatures – and threats to demand – look likely later in November.

“We remain concerned that the warm look ultimately wins out late month into at least early December and that [recent] colder changes will just amount to some variability mixing into the warm state,” the forecaster said. “If so, price risks would be skewed to the downside.”

Greater economic activity and mounting energy use could boost industrial demand and offset lighter weather-driven demand. However, despite news earlier this month of a vaccine potentially winning approval yet this year, the coronavirus pandemic in the near term is surging and threatening to stunt economic activity and, by extension, energy needs. The United States averaged more than 100,000 new cases each day during the covered week, according to Johns Hopkins University data.

“We expect near-term volatility surrounding vaccine development and the Covid-19 outbreak to remain,” said Raymond James Chief Investment Officer Larry Adam. “While the vaccine development is a positive signal, it cannot remedy the current surge or the risk of the outbreak worsening as we head into the winter months.”

Natural gas futures started the week in the red – Monday extended the prior week’s slump to six sessions – but gas markets rebounded over Tuesday and Wednesday, adding about 17 cents, along with the more favorable weather forecasts.

After a slight decline Thursday, futures climbed again on Friday, boosted by robust liquefied natural gas (LNG) volumes, and finished the week on a positive note. The December Nymex contract settled at $2.995/MMBtu, up 1.9 cents day/day and ahead 4% for the week.

The latest U.S. Energy Information Administration (EIA) storage report, released on Friday, showed an injection of 8 Bcf natural gas into storage for the week ending Nov. 6. The result fell short of market expectations — the median of major polls landed at a withdrawal of 3 Bcf — and marked a reversal from a week earlier, when EIA reported a pull of 36 Bcf.

The increase for the latest covered week lifted inventories to 3,927 Bcf, up from the five-year average of 3,751 Bcf and reflecting light weather-driven demand in the covered week.

The storage increase tempered enthusiasm Friday – futures had climbed as high as 10 cents early in the day before giving back much of those gains after the EIA report – but booming LNG levels provided the catalyst necessary to keep the prompt month in the green to close the week.

LNG feed gas flows topped 10.7 Bcf/d Friday, a record level and well above the 2 Bcf low reached over the summer after the pandemic arrived. Exports to Mexico also were strong, hanging near 6.0 Bcf much of the week.

EIA said it expects U.S. LNG exports to average 8.5 Bcf/d in November, above pre-pandemic levels, and remain robust into next year. In the latest Short-Term Energy Outlook, the agency predicted export volumes would average 8.4 Bcf/d in 2021, a 31% year/year increase.

EIA estimated exports averaged 7.2 Bcf/d in October, up 2.3 Bcf/d from September volumes. That marked the largest month/month increase on record.

Spot gas prices fell just short of a fifth-consecutive day of gains, led lower by drops in California, where high temperatures hung in the 60s for comfortable conditions and light demand.

Overall, National Weather Service forecasts called for cold in the nation’s northern reaches to continue through Tuesday, generating heating demand early in the week. However, warmer conditions are expected to roll in as the week progresses.

Spot prices across the country were mixed and mostly up or down by a few cents. In the Midwest, for example, Dawn finished up 2.0 cents to $2.625, while Chicago Citygate dropped 1.0 cent to $2.675.

In the Atlantic, meanwhile, the record storm season continued unabated. Tropical Storm Eta made landfall on Thursday in western Florida, and it later moved out to sea without causing major production disruptions. However, Tropical Depression 31 formed Friday in the Caribbean Sea. AccuWeather meteorologists expected it to strengthen and become the next named tropical system.

Should it reach tropical storm strength, the National Hurricane Center (NHC) would name it Iota, marking the farthest into the Greek alphabet the NHC has reached in a season. The 2020 storm season has already set the record for most named storms with 29.

As of Friday, however, Tropical Depression 31 was not expected to reach production facilities in the Gulf of Mexico.

“The system will move across the central Caribbean Sea during the next day or so and approach the coasts of Nicaragua and northeastern Honduras late Sunday and Monday,” NHC forecasters said Friday.

“While Sabine Pass does have access to other molecules” via the Creole Trail, Kinder Morgan Louisiana and Transcontinental Gas Pipe Line systems, “limited operationally available capacity exists to meet the entirety of NGPL’s prior deliveries.”