In an abbreviated trading period ahead of the long Memorial Day weekend, weekly cash prices dipped lower amid mild temperatures throughout the nation’s midsection and Northeast. 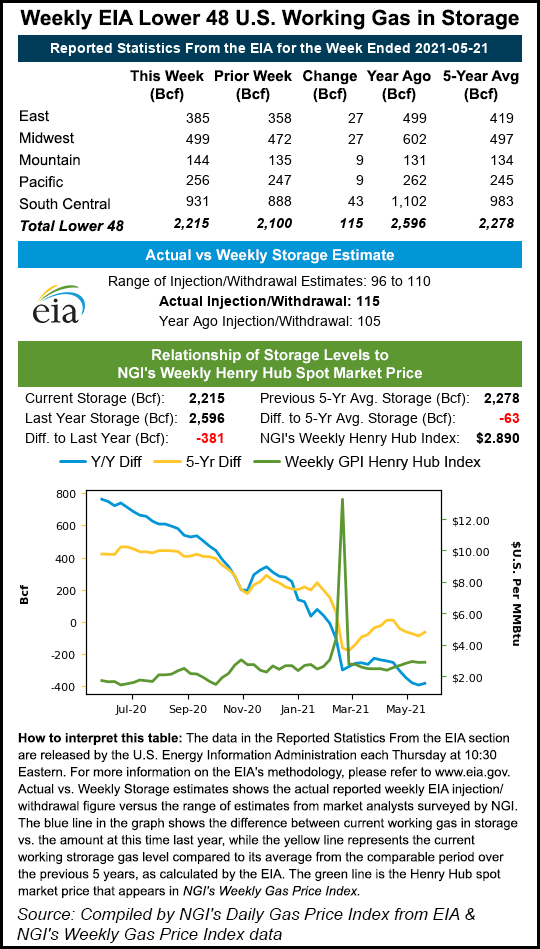 With both heating and cooling demand light on a national level, NGI’s Weekly Spot Gas National Avg. for the May 24-27 period fell 6.0 cents to $2.685. Gas traded during the period was for delivery May 25 to May 31 – altered by a day due to the holiday on Monday.

The July Nymex natural gas futures contract, meanwhile, settled at $2.986/MMBtu to close the trading week Friday, up 2.8 cents day/day, partially offsetting a steep loss the day earlier. It took over as the prompt month on Thursday.

Mild conditions permeated the Midwest and Northeast during the weekly cash price period, keeping prices in check and driving down the national average.

Outlooks as of Friday called for comfortable temperatures in key regions to start the first week of June, with highs in the 60s and 70s in the Midwest and Northeast. But forecasters anticipated stronger national cooling demand by late in the week and extending into the second week of the month.

Maxar’s Weather Desk said by the end of the first week of June “most areas turn warmer” and consistent summer cooling demand is expected in tandem. “Above- and much-above-normal temperatures are along the West Coast and in the Northern Rockies, while aboves return to the Midwest and East,” Maxar said.

Natural gas futures took a roller coaster ride over the course of the week.

The front month posted back-to-back gains Tuesday and Wednesday as the June Nymex contract traded into expiration at Wednesday’s close. It gained nearly 10 cents over its final two days as the prompt month, lifted by forecasts for farther reaching heat and national cooling demand by the second week of June.

On Thursday, however, as July took over as the front month, futures nosedived, dragged 6.9 cents lower day/day by a bearish government inventory report that raised fresh worries about supply/demand balances.

The U.S. Energy Information Administration (EIA) reported an injection of 115 Bcf natural gas into stockpiles for the week ending May 21. The result exceeded the high end of analysts’ estimates in major polls and easily eclipsed median projections.

Temperatures during the storage report week were cooler than normal over the southern United States, but cooling demand took hold in the West and analysts anticipated a lighter build than what EIA posted. Prior to the report, a Bloomberg poll showed a median estimate of 106 Bcf, while a Reuters survey landed at a median build of 106 Bcf. A Wall Street Journal survey found an average build expectation of 101 Bcf. NGI’s model called for a 107 Bcf injection.

The estimates compared with a 105 Bcf increase in storage a year earlier and a five-year average injection of 91 Bcf. The build for the May 21 week lifted inventories to 2,215 Bcf.

Liquefied natural gas (LNG) export levels during the EIA report week dropped from recent highs above 11 Bcf amid spring maintenance work at LNG facilities. LNG feed gas volumes hovered around 10 Bcf over much of the final week of May as well, at least temporarily diminishing the impact of an important catalyst for natural gas prices throughout most of the spring.

All of that noted, by Friday, analysts and traders shifted their attention back to the looming summer cooling season and the likelihood that LNG volumes will climb, given that demand from both Europe and Asia is holding strong. With supplies depleted, prices on both continents are high relative to the United States, driving demand for U.S. exports.

“…While history tells me to be short $3.00 natural gas at this time of the year, I fear the commodity rally and the U.S. price of gas versus Europe and Asia being too cheap,” said Scott Shelton of ICAP Technical Analysis. “Near-term information is less bullish than it once was, but I feel like being short is like standing in front of the commodity bus which is currently driving” toward higher prices.

LNG volumes climbed back above 11 Bcf on Friday – a first for the week.

NatGasWeather said on Friday that conditions over Memorial Day weekend did not look favorable overall for demand, given seasonally comfortable temperatures and sporadic thunderstorms across the Midwest, Great Lakes and Northeast, with highs in the 60s and 70s.

Still, demand was expected to pick up early in June. Given that Friday’s trading was for gas delivered to start the new month, the outlook helped physical markets rebound.

The Friday momentum was led by jumps in the West, where heat had already arrived and cooling demand had kicked into gear. El Paso S. Mainline/N. Baja gained 32 cents day/day to average $3.060 and SoCal Border Avg. rose 18.0 cents to $3.015.

A combination of weather-driven demand and maintenance interruptions fueled a surge in prices at SoCal Citygate. Prices at the hub skyrocketed $1.225 to $4.715, leading all gainers on the day. The hub was impacted by planned work at Sempra Energy’s Southern California Gas Co.

Regionally strong cooling demand is expected in parts of the West and the South early in the coming week. By June 7, temperatures are expected to warm across most of the United States into the 80s and 90s, including 100s in the Southwest desert. NatGasWeather said the shift could drive consistent use of air conditioners across most of the Lower 48.