In what is envisioned as a multi-year program, Washington state regulators on Tuesday issued a primer for moving toward a more robust, risk-based natural gas hedging program for the state’s four major investor-owned gas distribution utilities. 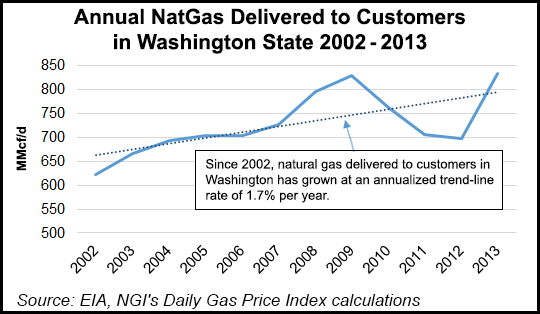 Dating back to a regulatory staff report two years ago, the Washington Utilities and Transportation Commission (UTC) released a whitepaper on hedging practices and regulatory oversight by RiskCentrix LLC Senior Partner Michael Gettings, who collaborated with the UTC staff and public counsel unit of the state attorney general. The report is part of a UTC investigation of gas utility hedging practices that began in 2013.

Washington’s utilities use hedging contracts to reduce risk and variability of gas costs as a means of protecting against unexpected price fluctuations. The report considers taking the hedging to a higher, more sophisticated level using quantitative finance, an approach originally developed in 1989 by JP Morgan and now taught and practiced throughout the university and finance sectors.

“Natural gas markets are a natural fit for use of quantitative finance tools to manage risk because the volatility of gas prices is very high and the dollars at risk are substantial,” Gettings wrote in “Natural Gas Utility Hedging Practices and Regulatory Oversight.”

UTC regulators noted that the report calls into question the common practice of gas distribution utilities to simply lock in a percentage of their projected gas loads through the use of programmatic hedging, as opposed to using quantitative measurements of the exposures the hedging decisions involve.

“Investor-owned regulated utilities generally have been slow to adopt these [quantitative risk] methods,” Gettings said. “The reasons may be due essentially to the regulatory implications of adopting complex methods with potentially large financial implications.”

The report breaks down utilities into three categories: regulated investor-owned utilities (IOU); unregulated affiliates of IOUs; and public (quasi-governmental) utilities. The latter two generally use the more sophisticated approach to hedging while basic gas IOUs do not.

While the white paper clearly supports a more sophisticated approach for the Washington gas utilities, it recommended a careful evaluation and step-by-step process leading up to a new hedging program by 2018.

Gettings’ recommended timetable calls for workshops and interim draft design work through most of next year, culminating in new tariffs being put in place by Nov. 1. Initial strategy implementation could be launched by Jan. 1, 2017, with a full-blown program rolled out at the start of 2018.

The UTC held an initial workshop with stakeholders to examine the hedging issue in January 2014 and that led to the white paper, which calls for three issues to be addressed in developing any serious strategy for hedging: hedge strategy objectives; effective frameworks for quantifying and monitoring risk on a daily/weekly basis; and regulatory policy that defines the framework and assessment criteria for utility hedge strategies.