Relatively warm winter weather across most of the country has dulled demand for natural gas, resulting in a 12% decrease in the Energy Information Administration’s (EIA) forecast Henry Hub spot price for 2017, to $3.03/MMBtu, the agency said in its latest Short-Term Energy Outlook (STEO), which was released Tuesday. 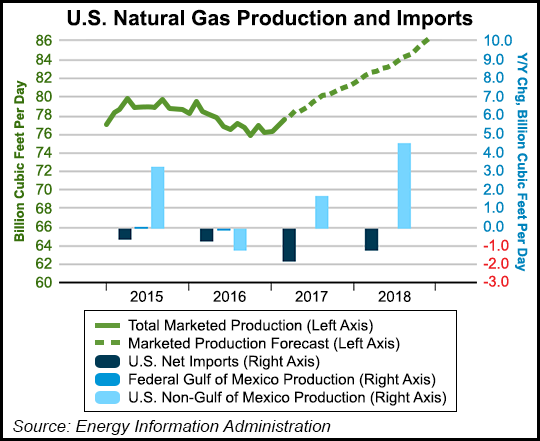 “This winter’s warm weather is cutting into U.S. natural gas demand, with natural gas consumption during February expected to be the lowest for the month in eight years,” said EIA Acting Administrator Howard Gruenspecht.

The front-month natural gas contract for delivery at Henry Hub decreased by 36 cents/MMBtu from Feb. 1, settling at $2.80/MMBtu on March 2, EIA said. NYMEX contract values for May 2017 delivery traded during the five-day period ending March 2 suggest a price range from $2.15/MMBtu to $3.82/MMBtu encompasses the market expectation of Henry Hub natural gas prices in May 2017 at the 95% confidence level, EIA said.

“Mild weather prevailed across much of the Lower 48 states in February, and initial data indicate that heating degree days were the lowest on record for the month,” EIA said. “The warm temperatures contributed to downward pressure on natural gas prices. Although February 2016 and 2017 were both unseasonably warm, February 2017 natural gas prices were higher compared with last year because exports were higher and U.S. natural gas production was lower, leading to lower levels of inventories.”

On Thursday, EIA reported ahistoric February storage build of 7 Bcf for the week ending Feb. 24. According to EIA data, the only other time there was an injection in the months of December, January or February since 2010 was for the week ending Dec. 7, 2012, which saw an injection of 2 Bcf. Inventories now stand at 2,363 Bcf and are 187 Bcf less than last year and 295 Bcf greater than the five-year average.

The surge in crude production will be led by increased drilling in the Permian shale and from rising production in the Gulf of Mexico, Gruenspecht said. The International Energy Agency recently said it expects the United States will be theNo. 1 source of global oil supply growth to 2022, with light tight oil from unconventional plays expanding the most.