Left in the ditch last year by FERC, Calgary, Alberta-based Veresen Inc. on Friday revived its efforts to build the first U.S. West Coast liquefied natural gas (LNG) export project along the south-central coast of Oregon. Despite past setbacks, the sponsors remain confident of getting a final go-ahead on the project. 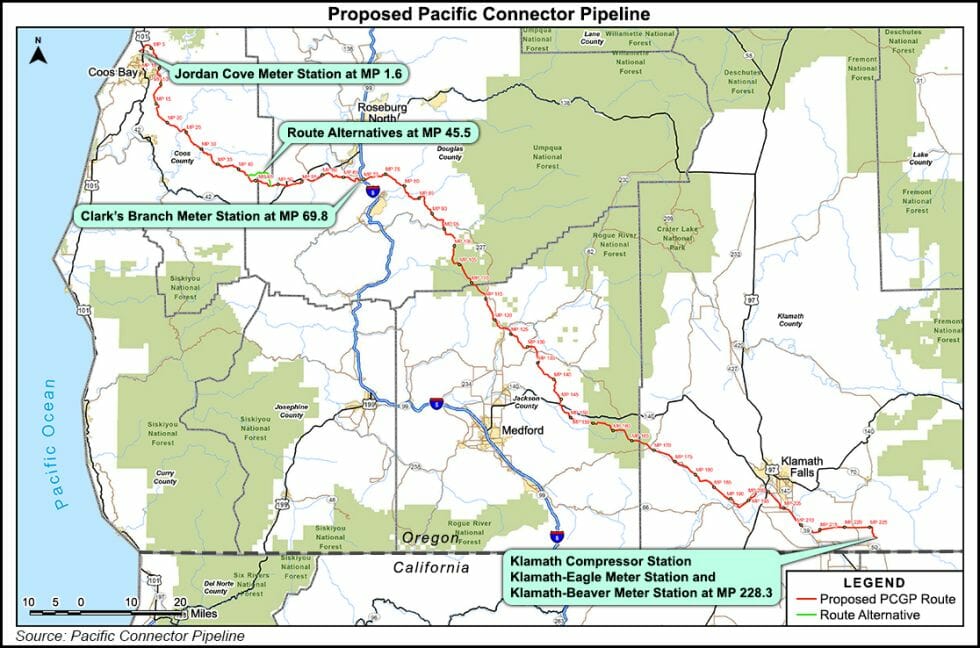 Jordan Cove LNG’s pre-filing application was approved by the Federal Energy Regulatory Commission, reopening the way for the $7.5 billion-plus project to work its way through the federal permitting process, something its backers thought they had accomplished until FERC rejected their application last March. FERC nixed a rehearing request last fall.

Still included in the more than decade-old plans is the sometimes problematic 232-mile Pacific Connector Gas Pipeline that would run northwest from interstate pipeline connections at Malin, OR, to the Jordan Cove LNG facility in the deep water international port at Coos Bay, OR.

“We have invested more than a decade in optimizing the engineering design and minimizing our environmental footprint through scientific analysis and community feedback,” said Betsy Spomer, CEO of Jordan Cove LNG. “We are confident Jordan Cove will receive regulatory approval and contribute significant direct and indirect benefits to southern Oregon.”

Spomer and her colleagues at Veresen continue to stress the project’s scope and potential economic impact. They reiterate that it would be the largest single private investment in the history of southern Oregon, generating hundreds of million of dollars in payments and tax revenue for Coos, Douglas, Jackson and Klamath counties throughout construction and operation.

Jordan Cove indicated it is working with FERC to schedule open houses, which will provide the public the opportunity to learn more about the project, ask questions, and meet Jordan Cove and Pacific Connector personnel.

Oregon Gov. Kate Brown has shied away from taking a position on the project, which was originally proposed 12 years ago as an LNG import project.

WSCOGA Executive Director David Ludlam said the denial last year was politically motivated and “ignored” the project’s economic benefits to other western states, such as Colorado, Wyoming and Utah. This time around, a coalition of gas producing states will be more active at FERC in support of Jordan Cove, Ludlam said.

“We’ll work with our U.S. senators to ensure the streamlined and technologically enhanced project application gets an approval quickly,” he said.