The use of corn crop residue to make ethanol and other biofuels reduces the amount of carbon in soil, but it also increases carbon dioxide (CO2) emissions to a level that will probably thwart federal goals to reduce greenhouse gas (GHG) emissions, according to researchers from the University of Nebraska-Lincoln. 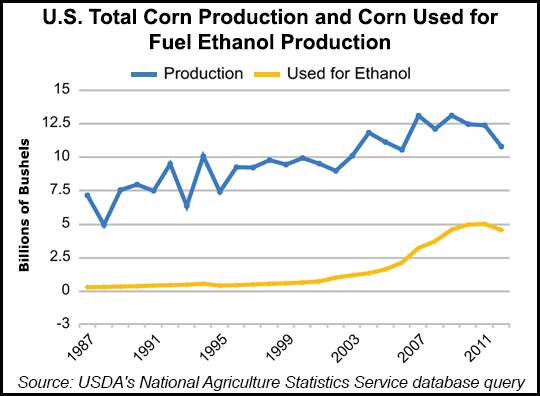 Meanwhile, the U.S. Environmental Protection Agency (EPA) announced Tuesday that it was revising its standard for cellulosic biofuel to a fraction of what it set in August 2013, after biofuel production fell short of production goals.

According to a three-page article that appeared in the journal Nature Climate Change, researchers found that carbon used in biofuels is oxidized into CO2 at a faster rate than when it is added to soil. They used a computer model to estimate CO2 emissions from corn crop residue — corn stalks, leaves and corn cobs left over from harvesting — taken from 580 million geospatial cells from across 12 states in the Corn Belt.

Using the eddy covariance technique to compare estimated daily CO2 emissions from corn residue and soil with CO2 emissions, the model found that removing six milligrams of carbon per hectare per year, over a five to ten year period, would add an average of 50-70 grams of CO2 per megajoule of biofuel energy produced.

“These emissions…are insensitive to the fraction of residue removed,” the researchers said. “Unless lost carbon is replaced, life cycle emissions will probably exceed the U.S. legislative mandate of 60% reduction in GHG emissions compared with gasoline.”

At issue are targets set by the EISA2007, also known as the Energy Independence and Security Act of 2007 (see Daily GPI, Dec. 20, 2007). Specifically, the federal law mandates that the use of biofuels be expanded to 36 billion gallons by the year 2022. The law also states that 21 billion gallons of the 36-billion gallon total be derived from non-cornstarch products, such as cellulose.

“Recent research suggests soil CO2 emissions from residue removal could produce life cycle GHG emissions for cellulosic ethanol that exceed the mandated emissions reduction,” the researchers said, adding that incubation experiments with soil and corn residue showed that soil organic carbon (SOC) is oxidized into CO2 at a rate of 0.54-0.80 milligrams of carbon per hectare per season, when residues are completely removed.

The researchers found that total annual production emissions over a five-year period would average about 100 grams of CO2 equivalent per megajoule (g CO2e/MJ). That is 7% higher than gasoline emissions (93.7g CO2e/MJ) and 62g CO2e/MJ above the 60% reduction in GHG called for in EISA2007.

“To mitigate the CO2 emissions that we identify, these facilities can use alternative feedstocks or put carbon back into the soil via cover crops, or export electricity to save emissions elsewhere,” lead researcher Adam Liska, an assistant professor in biological systems engineering, told NGI on Tuesday. “These systems must be managed appropriately to compensate for this issue.

“The carbon lost in any residue that is removed must be either replaced or off-set somewhere else in the system. Ethanol or any other biofuel from crop residue will have the problem we identify.”

Liska added that perennial grasses could be carbon-neutral. The study also found that samples taken from Iowa, Minnesota and Wisconsin showed “high SOC stocks from low temperatures, which slow oxidation of SOC and residue, and increase the relative change in SOC from residue removal.”

The study was funded by the U.S. Department of Energy and the Agricultural Research Division of the University of Nebraska.

In August 2013, EPA finalized the annual standard for cellulosic biofuel, as required by the federal Clean Air Act. The agency set a goal for having 6 million gallons of ethanol equivalent fuel be produced and used in the United States in 2013.

But last October, EPA received separate petitions from the American Fuel & Petrochemical Manufacturers (AFPM) and the American Petroleum Institute (API), asking the agency to reconsider the target. According to EPA documents, AFPM and API submitted their requests after one of two biofuel manufacturers, KiOR Inc., lowered its production guidance for 2013 from 3-5 million gallons to 1-2 million gallons. KiOR had made the announcement on Aug. 8, 2013, two days after EPA had finalized the 2013 rule.

EPA documents show the other biofuel manufacturer is INEOS Bio, which has a facility in Vero Beach, FL. KiOR has a biofuel production facility in Columbus, MS.

In his State of the Union address in February, President Obama called for the EPA and the U.S. Department of Transportation to develop fuel efficiency and GHG standards for trucks and other heavier vehicles by March 2016 (see Daily GPI, Feb. 18).