That roar heard throughout the U.S. gas market on Thursday was that of natural gas futures, which went out like a lion Wednesday as yet another shift in the latest weather data led to continued volatility. The prompt month rolled off the board at $6.202, up 32.0 cents on the day. The December contract, which moves to the front of the curve on Thursday, climbed 19.5 cents to $6.198. 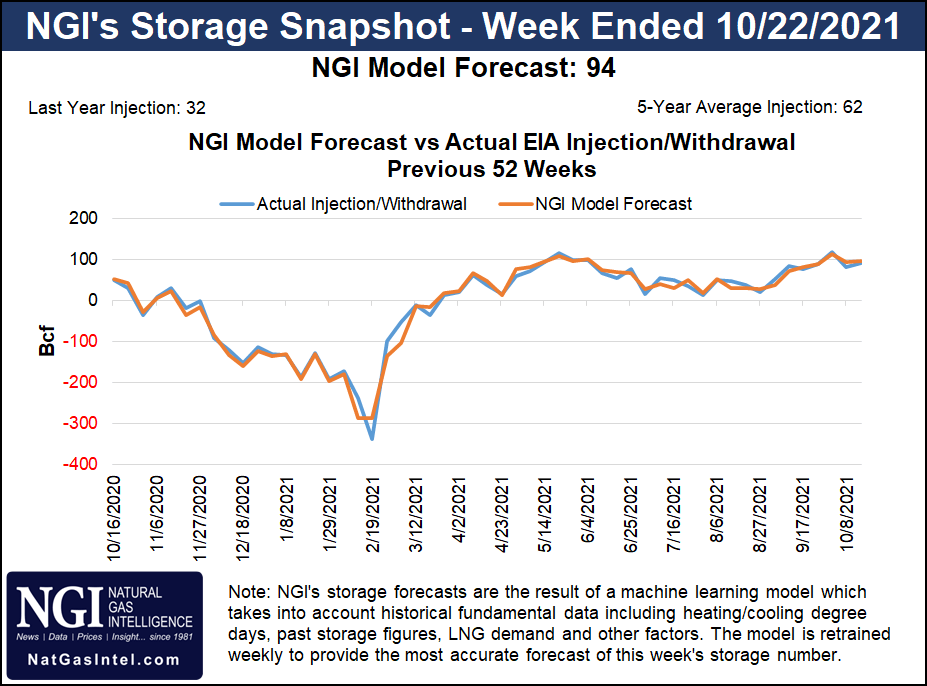 Despite Wednesday’s positive expiration for the November futures contract, gains did not come easy. Forecasts called for mostly mild conditions through the remainder of the week and into the weekend. NatGasWeather said the lack of widespread freezing low temperatures or highs in the 90s would do little to bolster demand.

November futures plunged to a $5.770 intraday low before rebounding on the latest weather model runs. NatGasWeather said the Global Forecast System trended a little chillier overnight for next week and then continued to add demand in the midday run. This pushes the Nov. 1-7 outlook toward the bullish side, according to the forecaster, as lows of teens to 30s were set to increase in coverage over the northern United States and down the Plains.

“The pattern Nov. 8-11 still favors national demand easing to lighter levels,” NatGasWeather said. “However, as we’ve been mentioning, the theme going back to last week has been for seemingly bearish/mild days in the 12- to 15-day period to add demand as they roll into forecast days 6-11.”

This could continue to occur as the upper pattern favors ways in which colder Canadian air can sneakily slide into the Midwest and interior Northeast for the Nov. 8-12 period. The forecaster also noted that there would be stronger cold shots into Europe in the coming couple of weeks, resulting in a drawdown of storage that already is precariously light ahead of winter.

Rystad Energy noted that even with milder-than-normal temperatures over the past week, storage levels in Europe have started to decline. Analysts noted a 0.5% drop week/week in inventories.

Meanwhile, further price support is provided by a forecast of temperatures dropping close to normal across Northwest Europe in the coming weeks. Xiong noted that this is a revision from prior expectations of above-normal temperatures in that time frame. However, she said the upside risk is balanced by the recent decline in coal prices that may trigger additional gas-to-coal switching in the continent.

Are U.S. Stocks In Good Shape?

The uncertainty over the staying power of the cold front was enough to spook the U.S. gas market despite an improving supply picture in the Lower 48. A string of above-average injections over the past month and a half has tightened up deficits to both year-ago levels and the five-year average.

As of Oct. 15, total working gas in storage was 3,461 Bcf, which is 458 Bcf lower than the similar week last year and 151 Bcf below the five-year average of 3,612 Bcf, according to the Energy Information Administration (EIA).

On Thursday, analysts are expecting deficits to tighten quite a bit more when the latest government inventory data is published. The EIA is scheduled to release its weekly inventory report at 10:30 a.m. ET Thursday.

This compares with last year’s 32 Bcf build and the 62 Bcf five-year average build, according to EIA.

Notwithstanding the surprises that the EIA data could bring, Bespoke Weather Services said after such a rally this week, the gas market would need to see some colder risks deeper into November to sustain these price levels. The forecaster isn’t highly confident yet and is leaning toward the view that conditions would turn back warmer into the middle of November.

In this case, there would be increasing downside risks to prices once clear of November expiration. Bespoke indicated that its data points to the supply/demand balance remaining quite weak.

“Obviously, if we are wrong and the blocking/colder regime hangs on longer, we can continue moving higher, perhaps significantly, so caution is a necessity,” it said.

Meanwhile, export demand is expected to remain strong throughout the winter. Though U.S. feed gas deliveries have fluctuated in recent weeks because of maintenance, aggressive buying overseas should result in stronger volumes soon.

At the same time, Rystad observed a 16% drop in feed gas to the Sabine Pass LNG export facility between the first and second half of October. Xiong said this was because of ongoing mechanical issues at Train 3.

“At a time of record export demand, this signals upward pressure on the market if constraints are extended,” she said.

However, EBW noted that LNG demand over the last winter averaged over 11.0 Bcf/d in December, which is higher than Wednesday’s levels.

The market is now waiting for Sabine Pass Train 6 and Calcasieu Pass to ramp up, along with some sort of resolution to the inconsistent demand at Sabine and Freeport.

“While LNG demand should reach record highs this winter, the magnitude of its bullish impact on natural gas prices will likely be smaller than it was in the summer,” EBW analysts said.

Spot gas prices found renewed strength Wednesday as a Nor’easter responsible for flash flooding and powerful winds began to wane as it moved offshore. Winds were expected to remain strong, but temperatures would become more fall-like again in the coming days, according to forecasts.

AccuWeather said wind gusts of over 100 mph were recorded Tuesday in the town of Duxbury, MA, while the highest gust of the day was reported in the Cape Cod town of Truro, which reached 113 mph. Over 490,000 reportedly were without power in Massachusetts early Wednesday. An additional 92,000 customers were left in the dark in Rhode Island.

Another storm is forecast to track into the Northeast later this week, but it is expected to weaken before reaching the region.

Elsewhere, price increases of 20.0-30.0 cents were the norm despite a mild weather outlook for the remainder of the week.