A glance at January bidweek natural gas prices failed to reflect a market entering the peak of winter; dramatic losses of more than $1 were common as early-season cold made way for a far milder December, with long-range outlooks not yet conclusive as to when frigid conditions would return. The NGI Bidweek National Avg. tumbled 82.5 cents to $4.315/MMBtu. 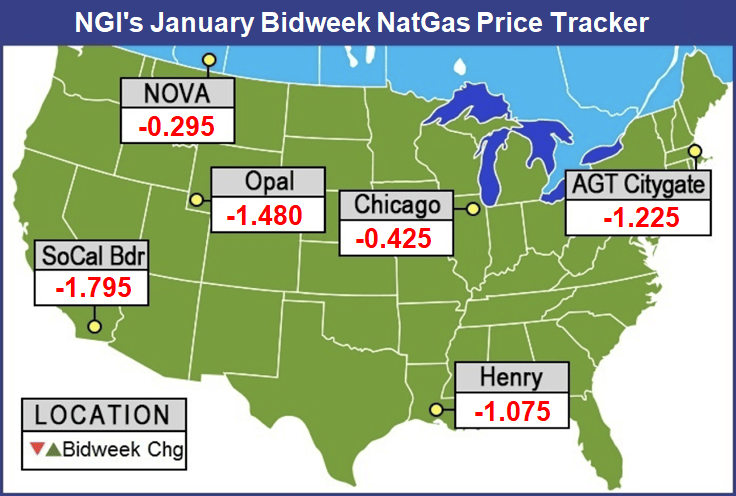 Despite the sell-off, January 2019 bidweek prices came in at a sharp 86-cent premium to last January but were on par with 2017 levels.

Unlike November — when a series of winter storms made for exceptionally strong demand across much of the United States and boosted bidweek prices for December — the last few weeks of 2018 proved to be rather mild, with only brief cold snaps that moved across the country limiting sustained demand.

The absence of truly cold air combined with light holiday loads to send both futures and physical markets tumbling in the last couple of weeks of 2018. After December futures hit a high of $4.92 and then expired at $4.715, the January contract rolled off the board at just $3.642.

The latest weather models Wednesday continued to keep truly significant cold at bay for a while longer. While some data did begin to show hints of colder air arriving later this month, the all-important European guidance remained the most bearish in showing warmth easily dominating through the middle of January, according to Bespoke Weather Services.

Other guidance showed a building negative Eastern Pacific Oscillation upstream that could deliver cold to at least the eastern third of the country, the firm said.

“While we are skeptical of models showing cold risks seeing how much they have been delayed, we do still expect these cold risks to increase through January as the upstream pattern should gradually trend more favorable,” Bespoke chief meteorologist Jacob Meisel said.

For its part, EBW Analytics said it is becoming increasingly likely that January — like December — will be milder than normal as the natural gas market has been losing expected demand at a “ferocious” rate, with a net loss during the past two weeks of more than 150 Bcf.

“Two weeks ago, every major forecaster was predicting a transition to much colder weather in late January or early this year,” EBW CEO Andy Weissman said.

This forecast was based on European and American model runs calling for the Alaska Ridge to reform, allowing cold Canadian air to flood into the United States. “While our forecast was not as far off as others, it has become clear that these forecasts (including our own) are a complete bust,” Weissman said.

This radical shift in weather will sharply reduce the natural gas storage deficit, he said. While a price rebound is still possible if cold weather returns, “risks of severe price spikes have been largely eliminated.” Furthermore, “the rebuild of storage lays the groundwork for much lower gas prices through most of 2019.”

Indeed, lagging storage inventories — which were more than 700 Bcf below historical levels through much of December — improved substantially last week when the Energy Information Administration reported a 48 Bcf withdrawal that left gas stocks as of Dec. 21 at 2,725 Bcf, 623 Bcf less than last year at this time and 647 Bcf below the five-year average.

In the months ahead, production growth will also continue to play a hand in how well gas inventories recover, according to EBW. Dry natural gas production increased 0.62 Bcf/d month/month in October, spearheaded by 0.53 Bcf/d of gains in Appalachia. Still, the pace of increase was the slowest of the previous four months, the firm said.

Output growth appears to have re-accelerated in November before slackening in December. “Looking forward, the extent and duration of any potential winter freeze-offs, however, may help set the stage for 2019,” he said.

The weakening futures and spot gas markets bled into bidweek trading as sharp drop-offs were seen in nearly every region across the United States. Even the constrained New England market posted substantial declines amid only brief periods of strong demand in the region. Algonquin Citygate bidweek prices plunged $1.225 to $9.345.

The sharp decline comes even as snow was forecast to spread from the Great Lakes into New England through Thursday, bringing the first wintry conditions of 2019, according to AccuWeather.

A wave of snow was forecast to develop over Michigan late Wednesday, bringing flakes to much of the state. The northern half of the state, including cities like Grand Rapids and Traverse City, were expected to get the highest accumulations of snow in Michigan, as snow was forecast to continue through early Thursday, meteorologist Courtney Spamer said.

Precipitation was forecast to spread across southern Ontario and into the northeastern United States Wednesday night and early Thursday. As the wave moves eastward, near-normal cold was forecast to hold over New England, allowing the precipitation to continue to fall as snow.

“Mostly light accumulations of snow are expected, with a coating to an inch or two of snow for most regions in New York and southern New England,” Spamer said.

The heaviest snow was expected to be confined to the Adirondacks of New York, as well as northern Vermont, New Hampshire and Maine, where several inches of snow were likely, according to AccuWeather.

Most Appalachia pricing hubs slid $1 more or less. Columbia Gas bidweek prices were off $1.14 to $3.395, but Texas Eastern M-3, Delivery surged $1.215 to $6.875 amid ongoing restrictions on the Texas Eastern Transmission (Tetco) system, including restrictions and sealed nominations on its lease capacity with Algonquin Gas Transmission and through the Shermans Dale/Heidlersburg compressor stations.

Bidweek prices across the Southeast were mixed as mild weather in the Sunshine State sent Florida Gas Zone 3 down $1.125 to $3.65, while the projected cold front in the East lifted Transco Zone 5 South by $1.415 to $7.36.

Midwest and Midcontinent prices were down as well even as some of the coldest weather at the end of 2018 occurred in those regions. For this week, a storm that dropped heavy snow over the interior Southwest the last couple of days was expected to spread a swath of snow, ice and dangerous travel from parts of Texas to portions of Oklahoma and Arkansas into Thursday night, according to AccuWeather.

Just enough cold air was forecast to slice southward, while moisture builds over the low levels of the atmosphere to set up a swath of ice from parts of western Texas to south-central Oklahoma and northeastern Arkansas, senior meteorologist Alex Sosnowski said. As the storm spins eastward, the warm air aloft preventing snow from falling was expected to trend much colder.

“This change in the storm structure will allow rain or a wintry mix to turn to snow and progress northeastward across the region,” Sosnowski said.

Just northwest of the ice and wintry mix area, a few inches of snow was likely to accumulate from part of northwestern Texas to western Oklahoma, according to AccuWeather.

Over in West Texas, however, the end of several pipeline maintenance events in and around the region gave a boost to struggling prices there. Waha shot up $1.365 to $1.525, but still remained the cheapest locale in the country.

Markets in the Rockies and on the West retreated from recent highs even as a parade of storms poised to unleash rain and mountain snow across the region this weekend was forecast to be the start of an unsettled pattern lasting into next week.

Through Friday, the most impactful weather across the West was expected to remain focused on Washington state, where rain will continue to soak coastal areas, with snow in levels lower in the mountains, according to AccuWeather.

The storm track was forecast to shift southward this coming weekend, allowing areas of heavy rain and mountain snow to move into California on Saturday, AccuWeather long-range meteorologist Max Vido said. “While most of the rain will target California, steadier rain could reach Portland, OR, and Seattle by the end of the weekend.”

The next round of heavy precipitation could focus on Northern California and the Northwest states early next week, while yet another storm could crash onshore by the middle of the week, bringing the chance for rain back to southern California.

“The potential for widespread flooding will increase with each successive storm,” Vido said. In addition, fluctuating snow levels with each storm can lead to a heightened risk of avalanches in the high terrain.

The wave of storms was expected to trigger a rise in heating demand in the Pacific Northwest and Northern California markets, though the weekend effect coupled with expected increases in renewable output would likely cut into heating loads, according to Genscape Inc.

“The cold temperatures accompanying the burst of moisture are expected to generate notable snowfall in the mountains, which should build snowpack. This is about the time of year we start tracking western snowpack levels as a leading indicator of summer hydro output potential,” Genscape senior natural gas analyst Rick Margolin said.

California snowpack is in “surprisingly decent shape for this time of year” with the Northern Sierras at 67% of normal and the Central and Southern Sierras at 75% of normal, according to Genscape. Last year at this time, these areas were sitting at just 25-33% of normal.

Washington and British Columbia snowpack levels are at or near seasonally normal levels, the firm said.