Amid the upheaval imposed by the coronavirus pandemic, 2020 global energy consumption in the transportation sector is forecast to decrease 10% year/year, led lower by an 11% drop in oil consumption, the International Energy Agency (IEA) said Thursday. 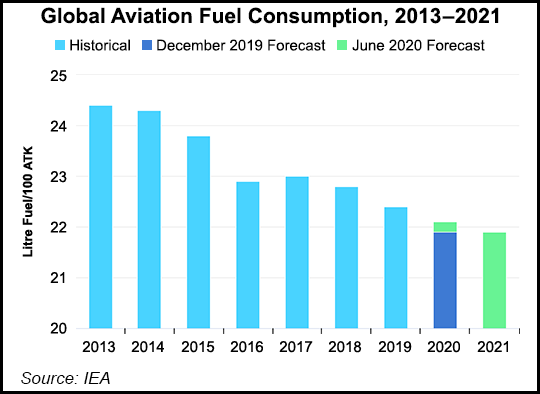 This decline is expected to account for nearly two-thirds of the total expected year/year pullback in oil demand, IEA said in a monthly fuel report.

In a previous report issued in November, the Paris-based global energy watchdog reduced its 2020 oil demand forecast by 400,000 b/d and said it expects an annual contraction of 8.8 million b/d. IEA estimated global oil demand to average 91.3 million b/d for the year. For 2021, demand is projected to increase by 5.8 million b/d year/year, but well below 2019 levels.

The International Civil Aviation Organization said in November it expected full-year air passenger traffic in 2020 to be 60% lower than the prior year, with declines across every region of the globe.

Such a drop would mark the sharpest on record. The extreme downshift introduces a wildcard into the oil demand recovery, IEA said.

“In the longer-term, the future of long-distance passenger transport is extremely uncertain,” the agency said. “The impact of the crisis on the economic viability of the aviation sector is a key unknown.”

While travel and business restrictions in most countries eased over the summer – following lockdown orders last spring when the pandemic first took hold – urban mobility, particularly in the United States, remained well below historic norms, IEA said. This suggests that demand for gasoline used to power vehicles may also face long-term headwinds. IEA said travel to workplaces in the United States at the end of October, for example, was 25% lower than in February, prior to virus outbreaks in the Lower 48.

A resurgence of virus outbreaks in November, particularly in the United States, renewed downward pressure on both jet fuel and gasoline demand, the U.S. Energy Information Administration (EIA) said this week.  U.S. petroleum use dropped for a third-straight week in the period ended Nov. 27.EIA said in its latest Weekly Petroleum Status Report overall petroleum demand fell 4% week/week and was 13% below year-earlier levels. On a year/year basis, jet fuel use was down 42% and gasoline was off 12%.