Global natural gas demand is expected to bounce back to pre-pandemic levels this year, but the recovery is likely to be uneven and growth could be weak even after demand soared amid a historic cold snap this winter. 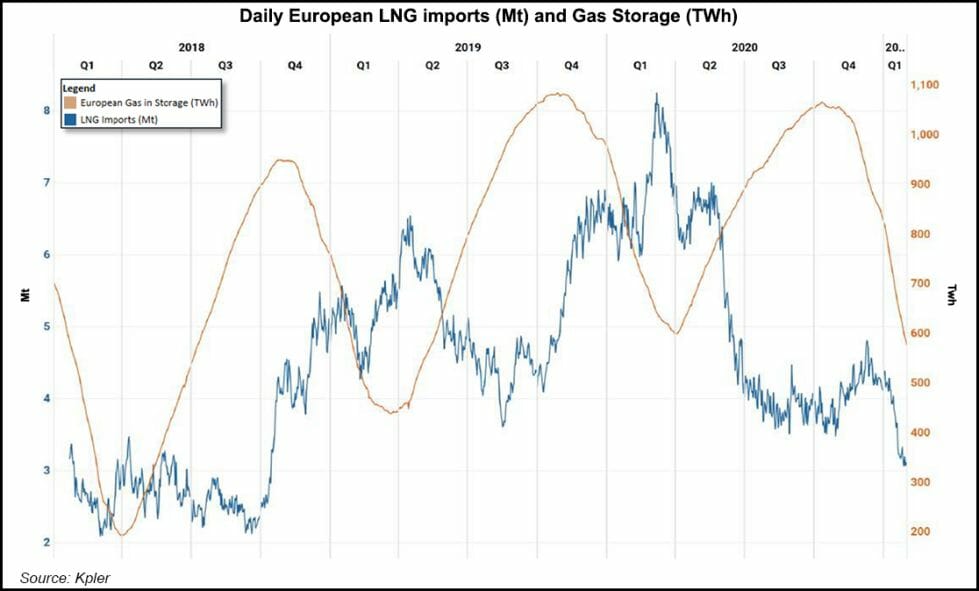 “We opened the year with this very strong bull run in Asia, which I would say was rather short-lived if we look at the prices now and the months ahead,” said Gergely Molnar, an analyst at the International Energy Agency (IEA).

IEA expects global natural gas demand to grow 2.8% this year, or just above the 2020 decline level, according to the agency’s first ever quarterly gas report. Growth is largely expected to be driven by emerging markets in Asia, Molnar told NGI. Mature markets in North America and Europe will see less growth.

“We expect about 3% liquefied natural gas (LNG) trade growth due to limited gas demand prospects, and this is going to be mainly in the Asia-Pacific region,” he added.

Following extraordinarily low global gas prices last year as demand declined during the Covid-19 outbreak and a supply glut, the LNG market in particular is tightening. The outlook was helped in small part by last month’s rally when spot LNG prices in Asia soared above $30/MMBtu and global gas stocks were depleted.

“It’s not as bad as it was last year at the start of the pandemic,” said Andrei Belyi, owner of the European energy consultancy Balesene OU. “If you look at things year-on-year, you have a situation that’s turned upside down with a recovery in Asia and the pandemic is not taking a toll on economies in the way it was before.”

Indeed, prompt prices in Northwest Europe were $6.180/MMBtu on Thursday, up from $2.744 at the same time last year. Asian prices have also increased markedly over the same period, going from $3.525 to $8.265. The strip shows the Dutch Title Transfer Facility at over $5.00 through the remainder of the year, while the Japan Korea Marker (JKM) is seen trading over $6.00 during that time.

Belyi told NGI that Covid-19 is still very much a variable for global energy markets. He doesn’t expect natural gas prices or demand to climb all that much through the remainder of the year given the pandemic’s lingering impacts.

IEA forecasts natural gas demand recovering by about 2% in Europe this year after falling by roughly 3% in 2020. The recovery is mainly driven by assumptions that heating and industrial demand bounce back this year. Weakness for gas in the European power sector is likely to be driven by gains in nuclear and renewable generation.

“In Europe, LNG imports are going to remain quite strong, but less significant than what we have seen over the last year,” Molnar said. Pipeline supplies to the continent are expected to ramp up this year due to a number of reasons, including increasing price-competitiveness of those imports.

Last month’s rally in Asia pulled natural gas out of Europe and left storage stocks there lower. Stocks were at about 45% of capacity this week, or 5% below the five-year average, which could have a lasting impact on European gas balances that supports prices there this year.

The rally also left stocks depleted in Asia, where storage data is less clear than in Europe and North America. Molnar said “it is fair to assume that stocks are down” in Asia, which he said could drive a bit more demand in the region until spring arrives.

The LNG market in particular could also find support this year from ongoing supply outages. A series of maintenance issues since last year in Australia, Malaysia, Qatar, Nigeria,Trinidad and Tobago and Norway have left the market short, particularly as winter started and left buyers to scramble for cargoes. While some of the issues have been resolved, plants in places like Australia are still running at limited capacity.

“As storage levels plummet around the world, not only does full LNG utilization seem the likely outcome but conversations are beginning to crop up about there not being enough gas to go around, which could really drive some interesting pricing action as we move through the summer,” said analysts at Tudor, Pickering, Holt & Co. on Friday.

The recent price shocks also seem to indicate the market is tightening, which has yet again brought a debate about the merits of the spot market and more traditional long-term contracting into sharp relief.

“If this summer remains more closely balanced, with exports managing to satiate but not flood demand, it could bode well for another strong winter price environment for suppliers in 2021-2022,” said Evercore ISI analysts led by Sean Morgan in a research note this week. “This may lead to more gas buyers looking to take their growing portfolios and fix larger portions of their long-term gas needs. If buyers start thinking more long-term and less-short term, it might mark the resumption of final investment decisions in the New Year.”

When buyers don’t want to pay a high spot price, sellers give up the opportunity for premiums in any concessions for longer-term deals. That reality means long-term contracting might not necessarily increase after the latest price surge, said Craig Pirrong, a professor of finance at the University of Houston.

“It takes two to tango,” he told NGI. “It takes two to make a deal.” Pirrong noted that last year, when prices were at rock bottom, buyers locked into what were costlier long-term contracts at the time couldn’t take advantage of cheap supplies on the spot market.

“The fact that we’re always going to see these situations on one side or the other is alone not going to be driving the contracting decisions,” he added.

While fundamentals like vessel availability and weather will continue to govern the LNG market, increasing reliance on the spot market could actually provide more supply flexibility and mitigate price shocks, Pirrong said. He also said that as more financial tools like futures contracts are developed and adopted in the LNG space, market participants will be better able to manage price spikes in the market. That’s already happening as trading of JKM futures — a pure LNG benchmark —  continues to rise.

“This is something that’s happened in other commodity markets for decades, if not centuries, so let’s let the spot market determine values and we’ll manage the risk of those values through the paper market —  the derivatives market.”

This winter’s volatility could be more common in the years ahead. The supply and demand balance over the next five years is set to significantly tighten versus the previous five, according to Timera Energy. While still uncertain, this year could mark an inflection point as the market transitions into a period of demand growth. There’s a four or five year period of time between currently sanctioned projects and their in-service dates, which could leave the market lacking the supplies it needs, the UK-based consultancy recently said.

In the near-term, capacity additions are expected in the LNG market. U.S. capacity is expected to increase to 71 million metric tons/year in 2021, according to data intelligence firm Kpler. The third train at Cheniere Energy Inc.’s Corpus Christi terminal in South Texas is expected to enter service next month and operational efficiencies at other U.S. facilities are also seen driving gains.

If more U.S. supplies hit the market as supply outages in Australia are resolved, Russian supplies ramp up this summer and oil supply cuts are eased by the Organization of the Petroleum Exporting Countries and its allies to boost associated gas output, the global gas market could loosen.

“We could easily be going from a supply crunch situation this winter to a supply glut this summer — that could happen,” said Kpler analyst Homayoun Falakshahi during a webinar last week.