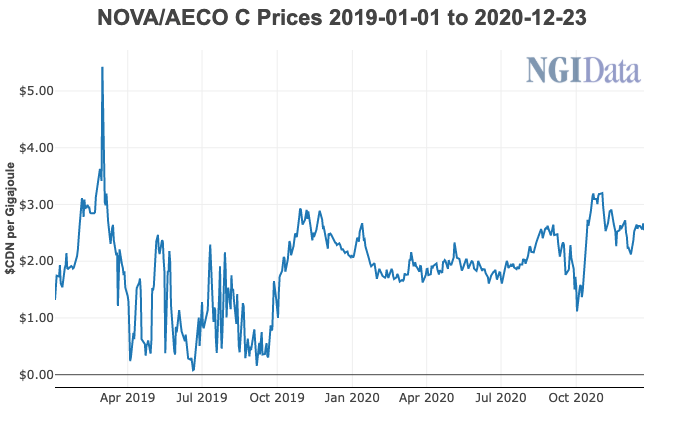 Political and economic risks jeopardize up to C$3 billion ($2.3 billion) of additions that the pipeline network would build if the industry fulfilled its potential, management said in a new edition of NGTL’s annual five-year capital plan.

“System flow requirements in the 2024-2025 portion of the design horizon have a high degree of uncertainty due to the influence of major market factors that are still too early in their development to predict,” the plan said.

The unknowns include government legislation, the pace and scale of Alberta thermal oilsands development as Canada’s top gas user, the future of gas-fired power generation and other industrial operations, and gas supplies from remote drilling locations, said NGTL.

Only one added construction proposal figures in the new five-year plan. The lone item is a modest C$45 million ($34 million) compressor improvement for the northern oilsands region.

The skimpy new project agenda at NGTL, which transports three-quarters of Alberta and BC production, breaks a chain of large additions completed recently, under construction or advancing toward approval by the Canada Energy Regulator (CER).

By 2024, the TC Energy western Canadian supply grid will have completed C$11.6 billion ($8.7 billion) of new facilities since 2018, according to an NGTL project update.

However, NGTL said its growth outlook relies on “general assumptions” that policy and economic trends will not erode demand increases by the oilsands, power generation, liquefied natural gas (LNG) exports and industrial expansion in the United States.

Further clarity on uncertain [gas] flow requirements and their implications will be obtained in 2021 through customer engagement and continued analysis of market dynamics,” according to the plan. “Depending on the results of these activities, additional facilities may or may not be proposed throughout 2021.”

In a CER business-as-usual projection, total Canadian gas production climbs by 50% to 23.5 Bcf/d as of 2039. But an “evolving energy scenario,” taking known possible environmental policy into account, foresees only 17% growth to 18.4 Bcf/d.

The CER did not predict effects of the net-zero target for greenhouse gas emissions in legislation proposed by the national Liberal government. The bill would only set the goal and create an expert committee to advise how to hit it. “It is difficult to predict the policies that governments will put in place in the future,” said the CER.