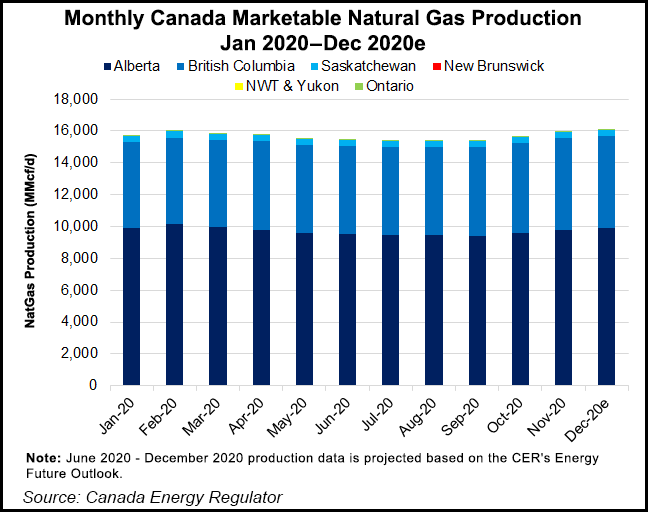 After more than two decades of deliveries for oilsands production “it continues to be a key area of growth,” said NGTL’s construction application.

Delivery contracts for 375 MMcf/d, from the Montney Shale and other gas formations in Alberta and British Columbia, support the NGTL project. Demand generated by gas-fired bitumen extraction processes nearly doubled between 2011 and 2018 to 2.5 Bcf/d, a period of rapid oilsands development.

“Going forward, lower long-term expectations have tempered growth in the oilsands sector,” said NGTL in the application. “However, producers have responded to commodity price shocks with efficiencies such as brownfield expansions, debottlenecking, improving technology and industry consolidation.”

Growth even after a global supply glut gutted oil prices in 2014 highlighted the durability of oilsands output, as opposed to faster but more recession-prone drilling for naturally flowing reservoirs.

“Once operational, projects have relatively low cash costs and long reserve lives, making this sector a stable and growing intra market,” said NGTL. As of 2030, gas demand for thermal oilsands production is forecast to rise by another 36% to 3.4 Bcf/d.

NGTL’s oilsands growth expectations are consistent with the latest forecast by the Canadian Energy Research Institute (CERI), which assessed effects of the Covid-19 pandemic and resulting global economic setbacks.

NGTL targeted North Corridor deliveries to begin in April 2022, with construction starting after the federal cabinet in Ottawa finishes the regulatory process by ratifying the CER approval.

The oilsands-driven northern pipeline expansion is part of a multi-project program forecast to cost about C$7 billion ($5.3 billion) by 2022.

The CER approved the biggest single item in February, the C$2.3 billion ($1.7 billion) 2021 NGTL System Expansion Project, but the federal cabinet postponed the deadline for its final decision until October because of the pandemic.