Booming U.S. natural gas and oil production have set the country on track to become the leading global gas exporter by the mid-2020s and a net oil exporter soon after, the International Energy Agency (IEA) said Tuesday. 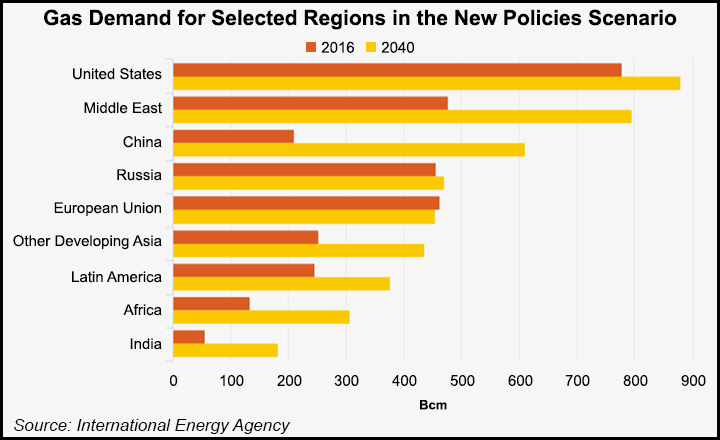 The resilience of U.S. unconventional natural gas and oil from shale and tight resources has cemented the country’s position as the biggest producer in the world, even at lower prices.

The unconventional oil and gas revolution has continued in the United States, “thanks to the remarkable ability of producers to unlock new resources in a cost-effective way,” researchers said.

By the mid-2020s, the United States should become the world’s largest liquefied natural gas (LNG) exporter and become a net oil exporter by the late 2020s.

These shifts alone would have a major impact on oil and gas markets, “challenging incumbent suppliers and provoking a major reorientation of global trade flows, with consumers in Asia accounting for more than 70% of global oil and gas imports by 2040,” researchers said.

U.S. LNG also is accelerating a major structural shift toward more flexible and globalized gas markets, IEA said, mirroring projections by the U.S. Energy Information Administration and other forecasts, including by BP plc and ExxonMobil Corp.

The ability of U.S. producers to unlock cost effectively not only gas but oil resources is expected to push combined output “to a level 50% higher than any other country has ever managed,” IEA researchers said.

“In our projections, the 8 million b/d rise in U.S. tight oil output from 2010 to 2025 would match the highest sustained period of oil output growth by a single country in the history of oil markets. A 630 billion cubic meter increase in U.S. shale gas production over the 15 years from 2008 would comfortably exceed the previous record for gas.”

The gains in output would fuel major investments in North American petrochemicals and other energy-intensive industries, IEA is forecasting. It is also reordering international trade flows and challenging incumbent suppliers and business models.

The United States is forecast to account for 80% of the increase in global oil supply to 2025, which would maintain near-term downward pressure on prices. U.S. tight oil is projected to plateau in the late 2020s, and as production overall declines in countries that are not members of the Organization of the Petroleum Exporting Countries, global markets may become “increasingly reliant on the Middle East” to balance supply.

Global natural gas use is projected to rise by 45% to 2040, becoming the second-largest fuel in the global mix after oil. With more limited room to expand in the power sector, industrial demand becomes the largest area for gas growth.

“In resource-rich regions, such as the Middle East, the case for expanding gas use is relatively straightforward, especially when it can substitute for oil,” said researchers. “In the United States, plentiful supplies maintain a strong share of gas-fired power in electricity generation through to 2040, even without national policies limiting the use of coal.”
However, around 80% of the projected growth in gas demand is forecast for developing economies, led by China, India and other Asian countries, where much of the gas needs to be imported, which makes transportation costs significant, and where infrastructure is often not yet in place.

Meanwhile, the competitive landscape for global gas may be formidable in the years ahead, as renewables in some countries “become a cheaper form of new power generation than gas by the mid-2020s, pushing gas-fired plants toward a balancing rather than a baseload role,” according to IEA projections.

“Efficiency policies also play a part in constraining gas use: while the electricity generated from gas grows by more than half to 2040, related gas use rises by only one-third, due to more reliance on highly efficient plants.”

Still, the new gas order is emerging, with U.S. LNG accelerating the shift toward a more flexible, liquid global market.

“Ensuring that gas remains affordable and secure, beyond the current period of ample supply and lower prices, is critical for its long-term prospects,” researchers said. “LNG accounts for almost 90% of the projected growth in long-distance gas trade to 2040: with few exceptions, most notably the route that opens up between Russia and China, major new pipelines struggle in a world that prizes the optionality of LNG.”

Gas supply also is expected to become more diverse, with the number of liquefaction sites worldwide expected to double to 2040. The main additions are seen in the United States and Australia, followed by Russia, Qatar, Mozambique and Canada.

“Price formation is based increasingly on competition between various sources of gas, rather than indexation to oil,” said researchers. “With destination flexibility, hub-based pricing and spot availability, U.S. LNG acts as a catalyst for many of the anticipated changes in the wider gas market.”
The new gas order may bring dividends for gas security, “although there is the risk of a hard landing for gas markets in the 2020s if uncertainty over the pace or direction of change deters new investments.”
In the longer term, a larger and more liquid LNG market is expected to compensate for reduced flexibility elsewhere in the energy system, such as in some countries as coal-fired generation is retired.

“We estimate that, in 2040, it would take around 10 days for major importing regions to raise their gas import levels by 10%, a week less than it might take today in Europe, Japan and Korea.”

Renewables aren’t slowing down either as costs continue to plummet. The share of electricity in the energy mix also is growing, while and China’s new economic strategy takes it on a “cleaner” growth mode, with implications for global energy markets.

“These shifts come at a time when traditional distinctions between energy producers and consumers are being blurred and a new group of major developing countries, led by India, moves toward center stage,” said IEA researchers. “How these developments play out and interact is the story of this outlook, with particular attention paid to their implications for natural gas, this year’s fuel focus.”

Over the next 25 years, the world’s growing energy needs are to be met first by natural gas and renewables, with fast-declining costs turning solar power into the cheapest source of new electricity generation.

Global energy demand is forecast to be 30% higher by 2040, but it still will be half as much as it would have been without efficiency improvements, according to the forecast. And coal? The “boom years for coal are over,” researchers said.

Solar photovoltaic (PV) is set to lead global capacity additions, pushed by deployment in China and India, while in the European Union, wind becomes the leading source of electricity soon after 2030.

“Solar is forging ahead in global power markets as it becomes the cheapest source of electricity generation in many places, including China and India,” said Birol. Electric vehicles (EV) “are in the fast lane as a result of government support and declining battery costs, but it is far too early to write the obituary of oil, as growth for trucks, aviation, petrochemicals, shipping and aviation keep pushing demand higher.”

The world’s consumers are not yet ready to say goodbye to the era of oil, IEA said.

“Powerful impetus from other sectors is enough to keep oil demand on a rising trajectory to 105 million b/d by 2040: oil use to produce petrochemicals is the largest source of growth, closely followed by rising consumption for trucks (fuel-efficiency policies cover 80% of global car sales today, but only 50% of global truck sales), for aviation and for shipping.”

The WEO-2017 includes a special focus on China, where economic and energy policy changes underway are forecast to have a profound impact on the country’s energy mix, continuing to shape global trends. A new phase in the country’s development results in an economy that is less reliant on heavy industry and coal.

At the same time, a bigger emphasis on energy technologies, in large part to address poor air quality, is catapulting China to a position as a world leader in wind, solar, nuclear and EVs and the source of more than one-quarter of projected growth in natural gas consumption.

Other countries also are seen continuing to push overall global demand higher, with India accounting for almost one-third of global growth to 2040.

Still it is “too early to write the obituary of oil,” researchers said. Global oil demand continues to grow to 2040, although at a steadily decreasing pace, while fuel efficiency and rising electrification bring a peak in oil used for passenger vehicles, even with a doubling of the car fleet to two billion vehicles.

“But other sectors — namely petrochemicals, trucks, aviation and shipping — drive up oil demand to 105 million b/d by 2040.”

Carbon dioxide (CO2) emissions have flattened in recent years, but global energy-related emissions are seen increasing slightly by 2040, but at a slower pace than in IEA’s 2016 projections.

“Still, this is far from enough to avoid severe impacts of climate change,” researchers said.

The WEO-2017 does not offer a forecast of what the energy system will look like but instead presents various projections to 2040 based on different policy assumptions. The main case, “New Policies Scenario,” models current and announced energy policies, including those in the Paris Agreement, which was reached by nearly 200 countries to reduce CO2 emissions.

This year, IEA also introduces the Sustainable Development Scenario, which offers an integrated way to achieve a range of goals: climate stabilization, cleaner air and universal access to modern energy.